The Brain Of A Boxer
This Very Important Documentary
Available On Amazon, ITunes, and Google Play April 6th 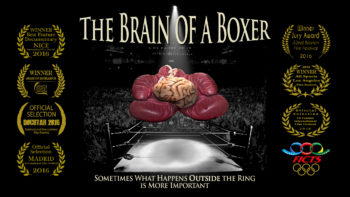 A year and a half ago I had the opportunity to view Unforgotten: The Story Of Paul Pender at the Boston Film Festival has won numerous awards. The movie, directed by Felice Leeds, looks at the life of former Middleweight Champion Paul Pender, and included rare footage of Paul’s career along with much interesting commentary. More importantly, it took an in-depth view of the toll repeated trauma to the the head took on the former champ’s brain. The movie has now been released to the public and is available at Amazon, iTunes, and Google Play. It has been renamed The Brain Of A Boxer. The new title, along with its broad availability, will, I hope, ensure this important film receives a wide viewership.

When Paul Pender died in 2003 after suffering years from symptoms of dementia, it was concluded the cause of death was due to Alzheimer’s disease. It wasn’t until his courageous widow Rose allowed research to be done on his brain that it was found that he had not been suffering from Alzheimer’s, but rather it was Chronic Traumatic Encephalopathy (CTE) that caused the deterioration in Paul’s brain and eventually led to his death. Furthermore, this damage very possibly began during his days playing high school football.

Much has been learned about CTE in recent years. Lawsuits reaching into the billions of dollars have been filed against the NFL by families of football players suffering from this horrible, and very preventable, disease. Public awareness is growing about the injuries being inflicted on the young participants who engage in contact sports. More parents are less inclined to allow their children to play football our climb into a boxing ring because of the high risk of brain damage involved in such participation. However, the public still has a desire to view these sports and is willing to pay huge sums of money to do so, and as long as the money is there people will be enticed to take up these professions.

In The Brain Of A Boxer you will learn much about the causes of and the research being done about CTE. Most of us assume brain damage is caused by serious concussions which usually result in unconsciousness. However, research has shown how even minor hits to the head, especially when received by young adults and children, causes damage. It is very important for parents to be aware of the dangers involved in many of the sports their children are participating in, and to find alternatives for them. Learning the competitive spirit and having children challenge themselves physically is a very important part of growing up, but having a brain that is injured beyond repair is not worth the price of that experience.

In making The Brain Of A Boxer, Felice Leeds has included interviews with many people from the world of boxing as well as from medical circles. Hearing from those who knew Paul Pender gives us insight into the man. Paul hardly fit the stereotype of the boxer as is seen in so many Hollywood movies. He had a deep intellect and a love for language. It would have been no surprise had he followed a different path in life, such as becoming a college professor.

Former boxers, boxing experts, and friends of Pauls such as former Champ Tony DeMarco, Joe DeNucci, historians Dan Cuoco and Mike Silver, former amateur boxing star Richard Torsney, sportswriter Bud Collins, and Richard Johnson the curator of the Sports Museum in Boston all bring their memories of Paul Pender to life. He was a complicated and interesting man.

For the medical perspective we hear from Dr. Ann McKee who’s tireless research on CTE has done so much to shed light on this terrible problem. Dr. McKee was recently named Bostonian of the Year by the Boston Globe. She has been studying the brains of deceased athletes for a number of years and the results of her findings are stunning. It has been learned that CTE can show up in the brains of athletes at a very young age. It is a progressive disease that gets worse with time and has no cure. It is also a very preventable disease. By no longer allowing athletes to receive trauma to the head the disease can be eliminated from sports.

Ms Leeds describes Rose Pender, the widow of Paul, as the true hero in this story. It was Rose who made the very difficult decision to allow her husband’s brain to be used for research. Paul Pender’s brain was the first to be studied. If not for the actions of this very courageous woman research into CTE may have been delayed for years.

The Brain Of A Boxer is a very interesting and important film. For those who love boxing there is much to enjoy. The archival footage is just amazing. Hearing the voice of Paul Pender as he talks about the dark side of boxing is eye opening. Also, for those of us who have loved boxing all of our lives, it forces us to confront some very difficult realities. Is the pleasure we get from watching athletes inflict head injuries on each other really something we should accept? Is it time to rethink how we view contact sports? And just maybe we should ask ourselves, would we allow our sons and daughters to take part in sports that can cause such serious damage to their brains? If the answer is no, than we have to deal with the question of allowing others to do so.

The Brain Of A Boxer is an important contribution to the discussion surrounding these issues. It is an excellent film, well crafted and fascinating to watch.

Richard Johnson, the curator of the Sports Museum in Boston, best described it. I believe he was quoting Paul Pender when he said “It is a full day if you have laughed and cried.” This documentary will make you do both.

Many thanks to Felice Leeds for making this film. I urge everyone to see it now that they have the chance. It will make you laugh and cry. And I hope it will make you think about the price so many athletes pay for entertaining us.

The Brain Of a Boxer
Directed By Felice Leeds
Available at iTunes, Amazon, and Google Play
For more information go to:
http://facebook.com/unforgottenchamp