Sorenson Center For The Arts

Samuel Beckett’s works are not easy to understand, but don’t let that stop you from seeing it. While they are filled with ambiguity it is fun trying to figure out what the meaning is behind them, or if there is any at all. I have been enjoying Beckett’s plays and novels since I was young and yet I am just beginning to crack the meaning, or what I interpret as the meaning, of some of them. You may wonder how I could possibly enjoy work that is not clear to me. Well, that is the fun in it. While it is difficult it is also fascinating, as well as funny, heartbreaking, soul-searching, and intriguing.

The Commonwealth Shakespeare Company in collaboration with Babson Arts is currently presenting three of Becket’s short plays, Rough For Radio II, The Old Tune, and Krapp’s Last Tape at the Sorenson Center for the Arts in Wellesley. If you have never seen a Samuel Beckett play this is a great opportunity to be introduced to his work.

With a cast led by Will Lyman (Animator, Gorman, and Krapp), and including Ken Baltin (Fox and Cream), and Ashley Risteen (Stenographer) you couldn’t ask for better talent to present this work. Combine this with the fine direction of James Seymour, and having it set in a very intimate theatre, there are only four rows of seats, and you are in for a special evening of theatre.

Rough For Radio II, which all takes place in silhouette behind a screen is about an artists struggle to dig into his creative spirit. The piece is a conversation between Animator and Stenographer with the voice of Fox that rises up from time to time. It is the most difficult of the three plays to understand but oh so interesting to watch.

The Old Tune and Krapp’s Last Tape deal with memories and dealing with getting old, lookingback, and regrets. Will Lyman and Ken Baltin are superb as two old friends who sit at what could be a bus stop and talk about old times. Their memories conflict at times, but memories are very often different from what actually happened. There is something very familiar that comes across when listening to these two.

Krapp’s Last Tape is both disturbing and funny. In typical Beckett fashion there is a bit of slapstick involved. The old banana peel is still good for a laugh. Will Lyman, as Krapp, goes it alone in this piece. Well, not quite alone, he also the voice himself (Krapp) to whom he is listening on tape that he made years before. It is interesting hearing the younger Krapp talking about his regrets and the futility of life yet filled with the energy to push forward in contrast the the older Krapp who is still feeling that same futility but is now tired and appears to have not much hope but is not short on regrets as he makes a new tape. Is it his last tape or just the last one up to that time?

Don’t be afraid of seeing this work. I would advise you not to overthink it. Sit and just let it play out in front of you. Better yet, bring some friends along as you will really enjoy discussing it afterwards. You will be surprised by how much you start to uncover as you talk about it.

Take a shot at Beckett In Brief, you will find it interesting and fun.

So, I have now written a review about three of Samuel Beckett’s plays and I am not even sure I know what the heck I have been talking about. I do know that it was a terrific evening of theatre. I don’t recommend everything I see, as my goal with this column is to get people interested in attending theatre who may have never gone, or who haven’t gone in some time. While this may seem like an unlikely work to recommend for a first time theatre goer I feel comfortable in urging my readers to go. Take a shot at Beckett In Brief, you will find it interesting and fun. 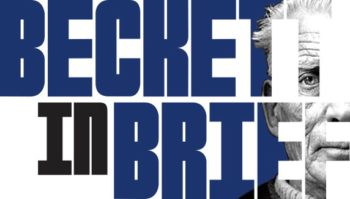 Among Samuel Beckett’s most autobiographical works, Rough for Radio II, The Old Tune, and Krapp’s Last Tape explore universal questions of creativity, memory, aging, sex, friendship, and the proximity of death. These plays from his mid-career are traditionally viewed as individual statements, but the three provide a wealth of impressions when placed in conversation with one another, giving us a better understanding of the legendary playwright’s intellect, passion, and temperament.

Will Lyman (Krapp/Gorman) was recently seen as Junius Brutus Booth in CSC’s production of Our American Hamlet at The Carling- Sorenson Center at Babson College, is well known to Boston audiences for his work with CSC, of which he is a founding Board Member (King Lear, Prospero, Claudius, Brutus); Israeli Stage (Oh God, Ulysses on Bottles); the Huntington Theatre (All My Sons, Guess Who’s Coming to Dinner, Dead End); New Rep (Long Day’s Journey into Night, Exits and Entrances, Clean House, Ice Breaker); SpeakEasy Stage Company (The Dying Gaul); Wheelock Family Theatre (To Kill a Mockingbird); Boston Playwrights’ Theatre (The Wrestling Patient in collaboration with SpeakEasy Stage Company, King of the Jews, A Girl’s War); and The Nora Theatre Company (Equus, Operation Epsilon). He is a multiple recipient of the Norton and IRNE Awards and was honored with the Howard Keel Award for service to the Screen Actors Guild. He was given 2013’s Norton Award for Sustained Excellence and 2015’s NETC Award. Television credits include “Crossbow,” “Threat Matrix,” and “Commander in Chief.” Movies for television include Meltdown, Our Fathers, Three Sovereigns for Sarah, and George Washington; he appeared in the films A Perfect Murder, The Siege, Welcome to the Dollhouse, Mystic River, Little Children (narrator), What Doesn’t Kill You. Mr. Lyman has been the narrator of the PBS public affairs program “Frontline” since its second season and has appeared as himself on The Simpsons.

Ashley Risteen (Stenographer) was last seen by Boston audiences in Gloucester Stage Co.’s Man in Snow, which moved on to a run at the La MaMa Experimental Theatre in Manhattan this past November. Her previous Boston credits include Speakeasy Stage Co.’s Appropriate,  Zeitgeist Stage Co.’s Neighborhood Watch, Big Meal, Cakewalk, and Hub Theatre Co.’s 6 Hotels. A native of the North Shore, she has been active in the Newburyport theatre community for many years, notably in the Firehouse Center’s The 39 Steps, and the Actor’s Studio’s Speed-The-Plow.

James Seymour (Director) has appeared in leading roles on Broadway (I Love My Wife), Off-Broadway (Small Craft Warnings, Moonchildren), on television (“Kate and Allie”) and at major regional theatres, including The Long Wharf Theatre, Trinity Repertory Company, and Portland Stage. Directed productions include All the Way Home at the Ensemble Studio Theatre, Road at The Marymount Manhattan Theatre, I Love My Wife at Detroit’s Birmingham Theatre, The Bacchae at UNC-Chapel Hill, and over twenty-five productions for The Island Theatre at the University of Guam. He has also taught Theatre, English Composition, Film, and Literature at Marymount Manhattan College, Queens College, CUNY, The Colorado College, and the University of North Carolina-Chapel Hill. His play Two Lovers (A Taotaomona Tale and I Domino) was produced in Guam. Currently a lecturer in English and Film at the University of Maine, Jim was raised in New Jersey and spent most of his life in New York City, after receiving his BFA from Boston University’s College of Fine Arts and Ph.D. from the Graduate Center at The City University of New York.