March 22, 1967 would turn out to be the date of Muhammad Ali’s last bout for three years. He had been classified as 1A by the draft board and ordered to show up for induction in the coming months. Before the bout Ali spoke about this possibly being the last time for the public to see him in the ring “Live and in living color”. The bout was held in Madison Square Garden and his opponent was the veteran contender Zora Folley from Chandler, Arizona. The fight was televised on home TV, so it was guaranteed to be seen by a large audience.

As a young boy I remember watching the fight, and what stands out in my memory from that night was the fact that, even at such a young age, I thought there was something odd about the fight. I didn’t know what, but it just seemed that things weren’t quite right.

Looking at a recording of this fight now I still feel that way, though now I know why I felt that way. There were a number of things that went on before, after, and during this fight that were not typical of a Muhammad Ali fight. 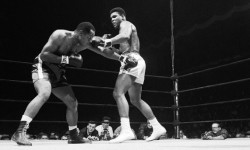 For one thing, this was one of the only black opponents whom Ali faced where he didn’t demean him and come up with some disgraceful name for him. He called Ernie Terrell an Uncle Tom, Floyd Patterson a rabbit, and Liston was the ugly bear. In the future he would use the term gorilla and to describe Joe Frazier and also call him an Uncle Tom. Ali showed no restraint in using racist language to insult his black opponents.

With Zora Folley he took a very different tone. He was subdued and spoke respectfully of his challenger. He brought up how Folley was a good family man with many children. He spoke of the respect he had for him. This was a very different Ali. Even after the fight he continued to praise him and even reached out to one of Zora’s sons telling him to be proud of his father.

If Ali’s behavior seemed odd, things were also a bit strange in the Folley Camp. Historian Mike Silver visited the gym where Folley was training and describes the atmosphere there as being filled with “…an air of depression.” Even though Zora was past his prime and getting his first shot at the title late in his career, he should have been embracing this moment. Finally, his dream of fighting for the championship had come true. Silver mentions others who didn’t get a chance until very late in their careers; fighters like Jersey Joe Walcott and Archie Moore, both of whom went all out once their long overdo opportunities finally arrived. There was none of this excitement in the Folley camp.

On the night of the bout Folley entered the ring quite a while earlier then Ali. He just remained seated on his stool while former champs and current contenders were introduced to the crowd (a great tradition that is now lost).When Ali made his entrance, Folley finally got up and loosened up a bit, but not much, odd behavior for a slick boxer who would normally want to break a sweat and be loose before the opening bell. Zora looked more like he would rather be someplace else then in the ring. It wasn’t a look of fear, but rather one of resignment. This was also strange behavior coming from a veteran of over 80 fights who had been in with most of the top contenders of his day including Sonny Liston whom he showed no lack of confidence with.

The fight itself looked almost surreal. Ali danced and circled for the first three rounds while Folley jabbed to the body and threw a few right hand counters that grazed Ali’s chin. There was a definite lack of urgency to Zora’s moves, but I suppose that can be attributed to patience as he was a methodical boxer, though I think it was something else. Those three rounds could be given to Folley but more because of the lack of any aggression on the part of Ali.

The fourth round was interesting. Ali hit Folley with an overhand right that did not seem to carry much power, and Zora went down flat on his face. He appeared to be out cold, and usually when a fighter is stretched out like that he is unconscious, but miraculously, at the count of four Zora suddenly came to life. He did a push up and got onto one knee. From that position he carefully listened to the referee count to nine before getting up. He was clear as a bell. I have never seen anything like this since. This seemed more like something from pro wrestling then boxing. Was Folley thinking of taking the full count and then had second thoughts? That’s what I believe.

Once he regained his feet he went right after Ali landing a good right that he did not follow up on. It was the only time in the bout where looked like he wanted to really win, but it was short lived.

The next couple of rounds were fairly slow though Ali did pick up the pace and won them. Between the sixth and seventh rounds, Ali’s manager Herbert Muhammad climbed up to the champion’s corner and whispered something in his ear. Afterwards, Ali would say that Herbert told him to stop playing around and get to work. 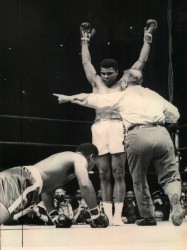 In the seventh round Ali came out and hit Zora with two overhand rights that were carbon copies of what he threw in the fourth. Again, Zora went down on his face, and again he came back to life, only this time instead of taking a knee he stumbled around the ring while the referee counted him out. He left the ring quickly after the announcer gave the official time of the ending of the fight.

In a New York Times wire story filed after the fight, Robert Lipsyte described the punch that floored Folley as a “phantom chop” and compared it with the punch that dropped Liston in Lewiston, Maine. Ali himself briefly described it as the Anchor Punch, the term he had used for the blow he hit Liston with. He quickly backtracked on that statement.

After watching this fight a number of times, I believe Zora Folley took a dive. Why would he do that? Well, it is pretty well known that most of Ali’s opponents received death threats before facing him. I think this happened to Folley and that it really had an effect on him. I think the Zora Foley who stepped into the ring that night was in fear of his life. Not because he was facing the fists of Ali, but because of what went on leading up to the fight. Of course, we’ll never know for sure.