Every Brilliant Thing is a one person play about depression and suicide, two subjects that undoubtedly make most people very uncomfortable when talked about. But talked about they should be, and author Duncan Macmillan has shown us the way to do this in this charming, caring, and quite funny work that also conveys so much of what we should be hearing in any conversation about this subject.

The production now playing at the SpeakEasy Stage is set in the round with the lights up throughout the entire performance. It is billed as a one person piece, that one person being played by Adrianne Krstansky, but it also involves a tremendous amount of audience participation. Ms Krstansky, whose character remains unnamed throughout, is in the theater meeting with audience members as they take their seats. She is giving many of them slips of paper with a number and words written on them. She is also making eye contact with others to see who would be comfortable with being a part of the show but is careful not to make anyone feel uncomfortable as the whole point of this is to put people at ease while talking about difficult things.

The numbered slips of paper contain  entries from a list called Every Brilliant Thing, thoughts Ms Krstansky’s character began compiling at the age of seven as a way of coping with her mother’s depression and attempts at suicide. The list is not about material things, but is rather quotidian with thoughts such as “People who can’t sing, but don’t know or don’t care”, “Ice cream”, “Christopher Walken’s hair”, and “The prospect of dressing up as a Mexican wrestler”. You’ll find yourself making your own list as the play moves along.

Adrianne Krstansky moves about the stage and through the audience with calm and grace as she interacts with and has members step in to play various people who come into her life; There is the vet who euthanizes her dog, Mrs. Patterson who uses a sock puppet, the lecturer at university who has his students read Goethe’s The Sorrows of Young Werther, and her first love and future husband Sam. At the performance I attended, the young man who assumed the role of Sam became quite emotional at one point. The spontaneity made for a very touching experience, something that makes this work so powerful.

In an interview with the author in the program notes, Duncan Macmillan tells us he wants the work to show us a way to talk about the most serious things in a way that isn’t serious. Now, while that may sound a bit oxymoronic it is just what he has accomplished. Every Brilliant Thing does not leave you emotionally drained, but it does get a very serious message across, and while this isn’t a group therapy session you will feel a bond with the people sitting around you and especially with Ms Krstansky who speaks to and touches all of us.

If you suffer from depression or know anyone who does you will find comfort in this play. And for those of you who have known someone who has fallen victim to suicide or if you have had such thoughts you will find there are those who understand you. There is so much to learn from attending a performance. I didn’t know that whenever a high profile person takes his or her own life it cause a spike in suicides, something known as the Werther Effect. With depression it is, as Mr. Macmillan says, either “treated as a taboo and ignored, or it is fetishized and glamorized”. It should be neither. We have to learn to discuss it with the understanding and caring that is conveyed in this play, and that is why I believe the people who most would benefit from seeing it is those who think depression is something you can just will away, it isn’t.

Do not be afraid to see Every Brilliant Thing as you will not be forced to speak or play a part in it unless you want to. You will not be made to feel uncomfortable. The treatment of the darkness that touches so many of us is dealt with in a way that allows us to talk about it in order to dispel the shame that causes so many to withdraw to an even darker place. Putting words to suffering is such an important step in dealing with it. Having people with empathy and openness listening allows sufferers to feel unafraid to talk.

As I was exiting the theater I couldn’t help but think how leaving the stage lit during the play was a metaphor for us shedding light on a subject that has remained hidden for too long. For all of our so-called understanding of and openness about mental illness we are still miles away from removing the stigma attached to it. The SpeakEasy Stage Company, Adrianne Krstansky, Duncan Macmillan, and director Marianna Bassham have done much to change how we view this illness. This message should be heard. Every Brilliant Thing could be the most important play performed this season. It very well may change your life, and that is a good thing. 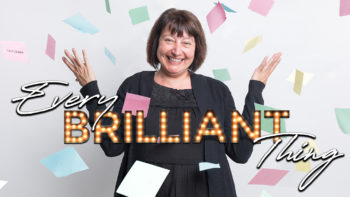