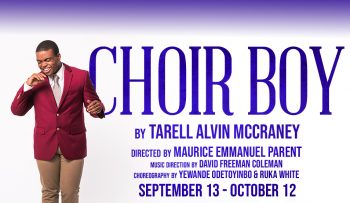 Nominated for four 2019 Tony Awards including Best Play, CHOIR BOY is a powerful coming-of-age story punctuated by the soaring harmonies of live gospel, spiritual, and R&B performances.  For fifty years, the elite Charles R. Drew Prep School has been dedicated to the education of strong, ethical black men; its legendary choir an emblem of all it holds true.  But for Pharus Young, the opportunity to take his rightful place as the leader of these talented vocalists comes at a price.  Can he still earn his place in the hallowed halls and sing in his own key?

CHOIR BOY is the work of acclaimed writer Tarell Alvin McCraney, Oscar-winner for the film Moonlight, which was based on his play In Moonlight Black Boys Look Blue. Mr. McCraney’s other plays include Ms. Blakk for President (co-written with Tina Landau), The Brother/Sister Plays, Head of Passes, and Wig Out!  Mr. McCraney is currently the Chair of Playwriting at the Yale School of Drama, and is an ensemble member at Steppenwolf Theatre in Chicago.  His original TV series David Makes Man recently debuted on Oprah Winfrey’s OWN Network.

Maurice Emmanuel Parent will direct the New England Premiere of CHOIR BOY.  An award-winning, Boston-based actor, Mr. Parent is also the Co-Founder and Executive Director of The Front Porch Arts Collective, a new black-led theatre company committed to advancing racial equity in Boston through theatre. Mr. Parent made his professional directorial debut last season with Breath & Imagination, a co-production between Front Porch and the Lyric Stage Company of Boston, for which he received an IRNE Award nomination for Best Director of a Musical.

Joining Mr. Parent are David Freeman Coleman, who will serve as Music Director, and Yewande Odetoyinbo and Ruka White, who will co-choreograph.

CHOIR BOY will run from Sept. 13 – Oct. 12, 2019, in the Roberts Studio Theatre in the Stanford Calderwood Pavilion at the Boston Center for the Arts, 527 Tremont Street in Boston’s South End.

Ticket prices start at $25, with discounts for students, seniors, and people age 25 and under.  For tickets or more information, the public is invited to call BostonTheatreScene Ticketing Services at 617.933.8600 or visit www.SpeakEasyStage.com.