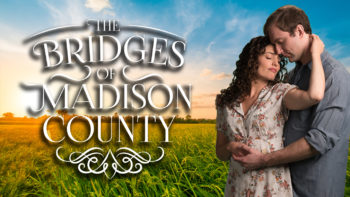 From May 6 – June 3, 2017, SpeakEasy Stage Company will proudly present the Boston Premiere of THE BRIDGES OF MADISON COUNTY, a lush, lyrical musical by Tony Award-winners Marsha Norman (book) and Jason Robert Brown (music & lyrics), based on the best-selling novel by Robert James Waller.

Winner of two 2014 Tony Awards including Best Original Score, THE BRIDGES OF MADISON COUNTY tells the story of Francesca Johnson, a beautiful Italian woman who married an American soldier to escape the war, and now leads a simple but dispassionate life on an Iowa farm. On the day her family departs for a trip to the 1965 State Fair, she is surprised by Robert Kincaid, a ruggedly handsome National Geographic photographer who randomly pulls into her driveway seeking directions. A quick ride to photograph one of the famed covered bridges of Madison County sparks a soul-stirring affair for the couple, whose lives are forever altered by this chance meeting.

M. Bevin O’Gara returns to SpeakEasy to direct THE BRIDGES OF MADISON COUNTY. Her previous SpeakEasy credits include directing the New England Premieres of appropriate, A Future Perfect, Tribes (Elliot Norton and IRNE Awards for Best Production), and Clybourne Park.

THE BRIDGES OF MADISON COUNTY will run for five weeks, from May 6 through June 3, in the Roberts Studio Theatre in the Stanford Calderwood Pavilion at the Boston Center for the Arts, 527 Tremont Street in Boston’s South End.