What If There Had Been A Third Fight? 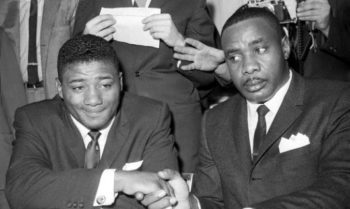 Sonny Liston and Floyd Patterson spent some time in the ring together, but not much. Their two fights combined lasted a total of only 4 minutes and 16 seconds with Liston winning by knock out in the first round on both occassions. The first fight took place in Chicago on September 25, 1962 and Sonny floored Floyd once, with that one knock down being for the ten count. Ten months later on July 22, 1963 in Las Vegas Liston dropped Patterson twice the with the second time being for the full count.

In the two fights Patterson landed only one blow of any consequence, and that wasn’t much of a one. He grazed Liston with a right hand during the second fight. Other than that it was all Sonny. It is interesting to note that while the fights were blow outs, Liston did not come out swinging wildly. He took Floyd apart methodically, setting his man up with left jabs and solid body shots. Sonny showed fast hands, using an accurate left jab, along with hooks and uppercuts. He had a definite game plan and executed it perfectly. If they fought a hundred times during that period the result would have been the same. 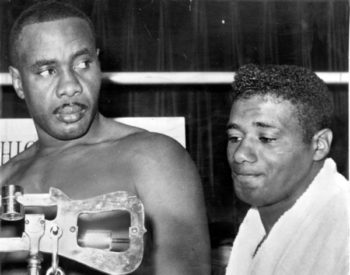 Patterson won the crown that had been left vacant when Rocky Marciano retired. He fought Archie Moore as the two were considered the leading contenders, and it was agreed the winner would be named the new heavyweight champion. After winning the title Cus D’Amato, Floyd’s manager, steered the new champ clear of any serous contenders. He had him fight second raters who appeared to pose no threat to Patterson. Fighters such as Roy Harris, Brian London, and Tom McNeeley. He even took on Olympic Champ Pete Rademacher who was making his pro debut the night of their title fight.

Floyd did run into one contender who proved himself to be underestimated; Ingemar Johansson. Johansson won the title by defeating Patterson by kayo in the third round. Floyd would come back a year later to become the first man to regain the heavyweight championship when he flattened Ingemar n the fifth round. The two would meet a third time with Patterson winning again.

From 1956 through 1961 the top contenders for the title were shut out from getting their deserved title shots. Men such as Cleveland Williams, Zora Folley, Eddie Machen, and Sonny Liston had to sit on the sidelines. It was not a good period for boxing, nor was it a good time for Patterson. It turns out that even though Floyd was making money and winning fights, he felt he was not proving himself as a man. In a high testosterone profession such as boxing that can cause feelings of shame.

It was Floyd who pushed D’Amato to make the match with Liston. Floyd had to prove to the world, and even more so to himself, that he was a true champion. Unfortunately, the outcome of both fights only left Patterson feeling more shame. The losses deeply embarrassed him. You think he might have given up boxing and taken up a more peaceful profession, but he soldiered on.

Free of D’Amato’s protective hand he started fighting top contenders. He beat guys like Eddie Machen, George Chuvalo, and Charlie Powell. These wins put him in line for a shot at Muhammad Ali and the championship. Ali did not like Patterson and wanted to punish him. Floyd, unfortunately, went into the fight with a bad back and was limited in his movement. The one sided fight was stopped in the 12th round.

Once again, Floyd did not let this stop him and he continued fighting. It was at this point in his career that Patterson started to really mature has a fighter. He would not lose a one sided fight again for the rest of his time in the ring. He kayoed Henry Cooper in four rounds, Fought a draw with Jerry Quarry in a fight many believed Floyd had won. In a rematch it was also thought he got a raw deal when Jerry was given the decision over him. He  beat Oscar Bonavena.

In a shot at Jimmy Ellis for the WBA Heavyweight Championship Floyd was robbed of a decision after fifteen rounds. He broke Jimmy’s nose in the first round and appeared to have captured at least a portion of the title for a third time. The sole judge, referee Harold Valan, thought differently.

During these same years Sonny Liston was on the comeback trail as well. He was also seeking to prove himself after his two embarrassing and suspicious losses to Ali. And, while Patterson was growing as a fighter, Sonny was taking on mostly journeyman and starting to age. He was hardly leading a life of health and fitness. His got wrapped up in the Las Vegas nightlife and was hanging out with shady characters. If you look at photos of him over these years you can see the aging in his face. In 1969 he took on Leotis Martin, and in the early going was having the better of it. But when Sonny came out for the 9th round he suddenly looked like an old man. It was apparent age and bad living had finally caught up with him. Martin flattened him in that round.

Sonny would have one more fight six months later when he stopped Chuck Wepner. Six months after that he would be found dead.

I have heard Floyd Patterson always wanted a third fight with Sonny Liston. He still wanted to prove himself and show he good take the Big Bear. If the two had fought a rematch in, say, 1969 or so what would have happened? Patterson was fit and clean living, Sonny was old and had slowed down. It can be argued Floyd was stronger at this point in his life, though he hadn’t really grown much physically. However, he had grown a lot emotionally.

I think a solid case can be made that Floyd would have won a third matchup. After losing to Ali in 1965 Floyd had 16 more fights with only three losses. Two of those three losses were considered bad decisions that should have gone in Patterson’s favor. He was not stopped again until his last fight which was against Muhammad Ali, and that stoppage was because of a cut eye. In the rematch with Ali, Floyd was doing much better than in their first encounter. He was competitive and it was too bad his eye was cut. It was an interesting fight.

A third fight with Liston would have also proved to be very interesting. Just imagine the Patterson of the Ellis fight fighting the Liston of the Martin fight. I think Floyd could have pulled out the victory. Now, wouldn’t that have been something!