It was a lovely two days of Celtic music and dance in Kennebunkport and Sanford, Maine as the Seaglass Chorale welcomed the Christmas Season with a beautiful program of music and dance. 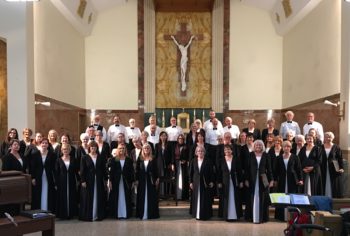 Led by Artistic Director Jean Strazdes, the group has shown they are able to continue raising the bar with the passing of each year. This past summer the chorale visited Ireland where they performed and it appears they brought some Celtic magic back with them.

The lovely voices were accompanied by Kim Karchenes on piano, Mary Carol Kennedy on flute, Dianne Smallidge and Stephanie Sanders on percussion, and Robert Daigle on bass.

The program which opened with “Riversong: A Celtic Celebration” was lively and touching and continued with a number of beautiful Celtic songs. These included “Gartan Mother’s Lullaby”, sung  a cappella, a tune that touches on fairies in Irish mythology, “Oikan Ayns Bethlehem” from the Isle of Man, and the lively and fun “The Little Beggarman” about Johnny Dhu who worked hard at not working at all.

The first part of the program also had the beautiful “In The Bleak Midwinter” with words by Christina Rossetti. This has always been one of my favorites and I was not disappointed by this performance.

Alex Pratt recited the Kenneth Patchen poem “The Snow Is Deep On The Ground”. Written during WW II it is a moving piece that reminds us to have hope at all times. Mr. Pratt’s rich voice made this recitation simply wonderful to hear.

After intermission, there was a special surprise. The Seaglass Chorale was joined by step dancers from the Stillson School of Irish Dance. The Stillson School is the only accredited Irish Dance school in the state of Maine. This was truly a treat and the young ladies who performed were simply outstanding. Under the direction of Carlene Moran Stillson these world class dancers who have won numerous competitions  thrilled the audience. Having them join with the chorale was a lovely touch.

The program closed out with the ancient Celtic carol “Stars of Glory”, followed by “Shule Aroon”,  Ola Gjeilo’s “The Ground”, and a “Celtic Silent Night”. All beautiful music but made that much lovelier by the voices of Seaglass. A friend described the evening as “Fine threads on a woven tapestry.” That is a perfect description.

Of course, what would a Seaglass Christmas concert be without a sing-a-long? Ms Strazdes finished the evening by turning to and directing the audience in a medley of Christmas Carols. It was the perfect finish to a wonderful evening.

If you have not yet attended a Seaglass Performing Arts concert I would strongly urge you to do so.

“A Joyous Celtic Celebration” certainly left all who experienced it with enough Christmas Spirit to last them until next year. Just wonderful!