A Celtic Christmas In Kennebunkport and Sanford, Maine 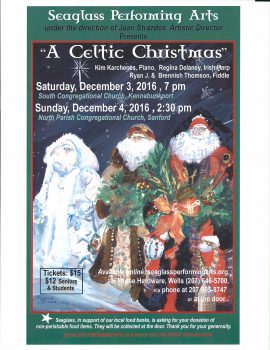 Seaglass Chorale is excited to announce that its 2016 winter concert will be A Celtic Christmas, featuring Regina Delaney on Irish harp and Ryan J. Thomson and his son Brennish on fiddle. The concert will include a celebration of the Winter Solstice, seen as a most significant time of year in Celtic culture.

Founded in 1993 by Artistic Director Jean Strazdes, the Seaglass Chorale is a non-auditioned adult choral group of 50-60 voices that has established itself as a voice to be heard! The chorale represents some 20 southern Maine communities and regularly performs throughout the area, with concerts in Kennebunk, Kennebunkport, Wells, Sanford, Saco, and other regional venues. We are well supported by our longtime accompanist, Kimberly Karchenes.
Internationally acclaimed, Seaglass Chorale has traveled to Europe twice, performing in Rome, Venice, Innsbruck, and Budapest.

In September of 2004, choristers proudly led the musical prelude at the National Cathedral in Washington, DC. In March of 2016 the works of Norwegian composer Ola Gjeilo were performed in Merrill Auditorium, Portland, Maine while Maine coastal photographs by renowned photographer Peter Ralson of Rockport, Maine were shown. Some members of the chorale sang in the Hunchback of Notre Dame chorale this past summer at the Ogunquit Playhouse. During summer of 2017 the chorale has been invited to perform in Ireland as part of a prestigious music festival.

This Celtic Christmas concert features Celtic music including Gaelic sung by the chorale as well as Celtic Harp, Celtic fiddlers, flute, piano & other instruments. There will be an audience sing a long of more traditional holiday carols toward the end of the concert.

Ticket Information
Ticket prices are $15 for adults and $12 for children and seniors.
Reserve your tickets by contacting us at 207-985-8747 or seaglass [at] gwi [dot] net.
Tickets can also be purchased at Morse Hardware in Wells or through a Chorale member.