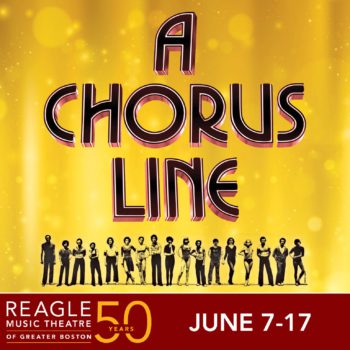 Reagle Music Theatre kicks off the company’s spectacular 50th Anniversary Summer Season with A Chorus Line from June 7-17.  The multiple Tony Award-winning musical will run for 8 performances at the Robinson Theatre, 617 Lexington St., Waltham, MA.  A Chorus Line is the ultimate Broadway story, following the hopes and dreams of young performers as they bare their souls auditioning for a Broadway musical.  A Chorus Line will feature a roster of regional talent featuring newsman and IRNE award winning actor of stage and screen, Scott Wahle as “Zach”, and IRNE award and Tommy Tune Award winner Kirsten McKinney as “Cassie”.

The production is backed by a full, live orchestra and includes the original Broadway costumes!  Produced by Robert J. Eagle; Directed and Choreographed by Leslie Woodies (A Chorus Line, On Your Toes); Music Direction by Dan Rodriguez (In the Heights, Show Boat).

A Chorus Line is a stunning celebration of the unsung heroes of the American Musical Theater – the dancers and singers of the Broadway chorus.  A Chorus Line takes the audience through the final grueling audition for a new Broadway musical while exploring the inner lives and poignant ambitions of the Broadway hopefuls competing for a spot on the stage. The show features one powerhouse number after another including “What I Did for Love,” “One,” “I Can Do That,” “At the Ballet,” “The Music and the Mirror,” and “I Hope I Get It.”  A fusion of song, dance, and drama, A Chorus Line was instantly recognized as a classic winning nine Tony Awards in addition to the 1976 Pulitzer Prize for Drama. The original Broadway production ran for 6,137 performances.

Reagle Music Theatre’s 50th Anniversary production of A Chorus Line features a full cast of 27 performers from Boston, New York and across the country, starring Boston’s own Scott Wahle as Zach and Kirsten McKinney as Cassie Ferguson.