Review: The Gods Of War

Springs Toledo is well known in boxing circles as a very good writer who also knows his boxing. Whether writing about Harry Greb or one of the current champions, his style is a throwback to the days when boxing writers knew the craft of writing as well as the sport. You do not have to be a boxing fan nor do you need a knowledge of the Sweet Science to enjoy his work. However, if you do know your boxing history Springs will make you think more deeply about it.

In his book The Gods Of War, Toledo has compiled a collection of his essays in the first section and then takes us on a run through his selection of the ten best fighters of the modern era (fighters who hit their prime after 1920) he calls this select group The Gods of War. 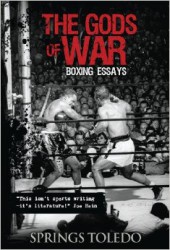 Reading the essays in the first section you will hear echoes, not imitations, of A.J. Leibling and Raymond Chandler. Springs is not attempting to set the clock back with his style of writing, but rather he understands that boxing is the perfect subject for interesting and creative writing. I think of the term coined by Gay Talese, creative non-fiction, when reading these pieces as they all have a certain sense of drama to them that deserves to be explored.

I was pleased to see four essays on Sonny Liston, a fighter much too little has been written about. Springs absolutely nails it when he discusses the Ali Liston fight that was called off in Boston. If that fight had taken place history may have been very different. Much of what is revealed here I know to be true.

He talks about Alexis Arguello and the suffering this very decent man lived with all his life, a life that ended tragically and too soon, but one that is not uncommon in boxing. Boxing has a way of focusing our attention on the unfairness and cruelties of life, and Toledo uses his pen to paint a picture of this reality.

In the section entitled The Gods of War, Springs has developed a criteria for rating the greatest fighters. These greatest of all time lists are always controversial and guaranteed to raise the hackles of boxing fans, but in this case the author has used a very interesting and solid system for rating his picks. Will you agree with his choices? Probably not. But that is part of the fun. What will happen is you will be forced to think more deeply about your own picks. This is not just a list, but a series of short pieces that give the reader insight into each of the Gods of War. I feel I am pretty knowledgeable about the sport having spent a lifetime around it, but I learned much by reading these essays. For instance, I had not known about the connection between the Bob Fitzsimmons Shift and Roberto Duran. I would advise not jumping to the end to see the pick for the top spot, but rather read and savor each bio has you work your way to the end. There are surprises, but Springs backs up each of his choices with his terrific writing and deep insight.

There are many books on boxing being published today. Some very good, some that are labors of love that just don’t measure up, and some that would have been better off remaining as trees. The Gods of War is one that deserves to be read by everyone with an interest in boxing, an appreciation of good writing, and those with an a desire to know more about the human condition. I know it will remain in my library for many years to come.

A couple of weeks ago I watched the Gennady Golovkin Daniel Geale bout on television. I saw something before the bout when the cameras were in Golovkin’s dressing room, something you rarely if ever see today, Gennady was shadow boxing. This used to be common practice as fighters warmed up for their bouts, loosening up and getting ready to do battle. Today, they are usually spending their time warming up while robotically playing patty cake on the mitts with a trainer or having batons swung at them. Golovkin actually moves around the room getting loose and is practicing the movements he will be using in the ring. His mind is engaged. He is not just going through drills and repeating the same moves over and over again. He is visualizing his opponent in front of him, imagining what he will be facing in the ring. He is getting his body ready while engaging his mind.

Golovkin is a very good fighter. He showed that when he rolled with a right hand while delivering his own knockout punch in the Geale fight. He has power, is in great shape all the time, and knows how to think in there. He knows how to slip punches and create angles. He has been well taught and is learning his craft. He is also a class act, behaving as a gentleman before and after a bout. There is no cheap talk or language you wouldn’t want you kids to hear. He carries himself well and sets a very good example.

I do see problems for him though. I think he can dominate the division, but I doubt we will ever see him reach his full potential. We may even see him regress a bit. This is because he does not have the level of competition to force him to improve. At this stage in his career he should still be forced to learn in each fight he has. He is a very focused and intellectual boxer, but he does not have the peers to pressure him to go beyond where he is now. I saw some signs that he was getting just a bit sloppy in the Geale match. This is not to take anything away from him, it just shows that he is so good he does not have to pay for his mistakes. I doubt his camp is even able to find good sparring for him. In an earlier age they would have had solid journeyman sparring partners for a fighter like Gennady. Guys that would make him work in there, forcing him to hone his skills and continue to learn new moves. I hope he continues to improve so we get to see if he is able to develop into a great fighter, but I fear that instead of improving, he may be brought down by the caliber of fighters he is facing in today’s game. He is very smart. He is very talented. I want him to prove me wrong.

Bobby can be reached at bob2boxer [at] yahoo [dot] com