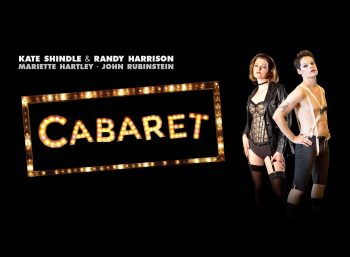 Come to the Cabaret, your table’s waiting! Decadent nightlife meets dangerous times at Berlin’s alluring Kit Kat Klub in the iconic Broadway musical Cabaret, on stage July 17 through August 10. Set in the cabaret underworld on the eve of Hitler’s rise to power, the Ogunquit production is based on the searing Sam Mendes and Rob Marshall musical recently revived on Broadway and is staged by BT McNicholl, who directed the Playhouse production of Cabaret back in 2006. This unforgettable musical stars stage and screen actors Randy Harrison as the Emcee and Kate Shindle as Sally Bowles. The Ogunquit production also features Billy Harrigan Tighe as Cliff Bradshaw, Mariette Hartley as Fraulein Schneider, John Rubinstein as Herr Schultz, Noah Plomgren as Ernst Ludwig, and Katrina Yaukey as Fraulein Kost. The Ogunquit production features the Broadway set based on the original design by Robert Brill and the Broadway costumes by William Ivey Long.

Cabaret tells the story of Cliff Bradshaw, a young American writer newly arrived in Berlin, who falls in love with cabaret singer Sally Bowles. Their romance sizzles amid the back room culture of the cabaret and the tumultuous atmosphere of pre-Nazi Germany. Cabaret is a raw and powerful jazz musical that explores the dark life of Berlin’s natives and expatriates as Germany slowly yields to the emerging Third Reich. The show has had numerous Broadway and London revivals, features a book by Joe Masteroff and is the winner of multiple Tony Awards, including Best Musical and Best Original Score for John Kander (music) and Fred Ebb’s (lyrics) compelling musical numbers which include, “Willkommen,” “Money,” “Tomorrow Belongs To Me,” “Maybe This Time” and “Cabaret.”

Immerse yourself in the show with stage-side table seating. Contact the exclusive Cabaret concierge line to learn more, 207-646-5511 ext. 328. This production of Cabaret contains adult subject matter, a review of the content advisory online is recommended before purchasing tickets. To learn more about becoming a Playhouse member, subscriber, or to purchase tickets and gift cards, visit www.ogunquitplayhouse.org or call the Ogunquit Playhouse Box Office at 207-646-5511.