Why Did Duran Quit? 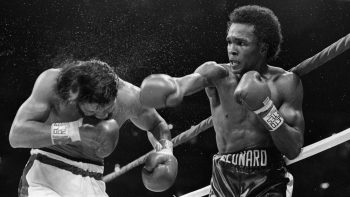 When Sugar Leonard and Roberto Duran faced each other in the ring for the first time, it was for the welterweight title being held by Leonard. The fight took place on June 20, 1980 at the Olympic Stadium in Montreal, Canada. It was built up as, and lived up to, being one of the best world championship fights in history. It was supposed to pit the matador, Leonard, vs the bull, Duran. However, things turned out a bit differently as Leonard decided to meet the bull on his own terms and slug with Duran.

The hype leading up to the fight was particularly ugly with Duran at his worst with vulgar language and gestures. He even went as far as making lewd comments about Ray’s wife. Today we look at Duran as an elder statesman of boxing, but it has to be remembered that he was as brutal with his words outside the ring as he was with his fists inside of the ropes. Winning didn’t change his tone either. In an earlier fight, after he knocked out Ray Lampkin and was told Lampkin was taken to a hospital Duran responded “I was not in my best condition. Today I sent him to the hospital. Next time I’ll put him in the morgue.” Hardly the words of a gracious winner.

In spite of all this, Duran was an immensely popular champion in his prime, particularly with his fellow countrymen from Panama, where he was a national hero. He was also a fan favorite in the states because of his non stop acton style and amazing knock out record. A Roberto Duran fight was always exciting.

Sugar Ray Leonard also had a huge following. He first made headlines when he won Olympic Gold at the 1976 Games held in Montreal. Ray was an exciting fighter with a captivating smile. His fast hands and power punching were a throwback to great fighters such as Sugar Ray Robinson.

The excitement that existed around the first Leonard/Duran fight was amazing. It rivaled a big heavyweight fight in interest, and was one of those matches that drew non fight fans. Everyone was talking about it, and everyone had an opinion on it. On entering the ring the two fighters had a combined record of 98 wins and 1 loss. Duran had many more pro fights than Leonard, 72 vs 27, but Ray did have a very extensive amateur career. These were two very experienced champions facing one another.

The fight lived up to expectations but with a slight twist. Leonard decided to eschew his boxing skills and instead went toe to toe with Duran. It was not a wise decision on Ray’s part but it sure made for quite the slugfest. Though it may have been a strategic mistake, Leonard did show he could stand up to Duran on Roberto’s terms. While the decision was not controversial, it was close.

After winning the decision, Duran was on top of the world. He returned home and began partying. His weight ballooned and he did no training. Meanwhile, Ray Leonard became focused on what went wrong and what he could do to defeat Roberto in a rematch. He was motivated and wanted revenge.

During negotiations for the two to meet again, Carlos Eleta, Duran’s manager, agreed to have them face each other just five months after the first fight. This gave Duran only a short time to lose weight and get fit both physically and mentally to face Leonard again. It was something he was not able to do.

On the night of the return fight, November 11, 1980 at the Superdome in New Orleans, a very different Roberto Duran stepped into the ring. In contrast to the high energy “Hands of Stone” who bounded into the ring in Montreal, this Duran looked tentative and not sharp. He appeared lackluster climbing up the steps into the ring.

Before any fight a boxer’s mind can play tricks on him. His thoughts go back to training and whether or not he did everything he could to be prepared. Second thoughts can haunt a man who is about to step into the ring; “Why didn’t I run those extra miles? Why didn’t I spar more rounds”? As Shakespeare once wrote “Our doubts are traitors and make us lose the good we oft might win by fearing to attempt.” Was Duran’s mind playing games with him that November night? Were his thoughts causing him to fear attempting to beat Leonard again?  In retrospect, you can see something, or the lack of, in his eyes before the bell rang.

It is also interesting to note that when the first round started Roberto extended a glove to Leonard. It was almost like a peace offering. It was a brief gesture and went unnoticed by those at ringside, but it tells a lot about his state of mind as the fight began. It was as if he wanted to make friends, very uncharictaristic for Duran.

For his part, Leonard employed an entirely different tactic in this fight. He came out circling and jabbing. When Duran got close to him he was able to tie him up and take away his inside game. Ray had learned from his mistakes and was waging a brilliant fight. He was moving, throwing combinations, making Duran miss. Ray was performing a well choreographed dance of violence, and while he may not have been hurting Duran physically with his punches, he was making him feel foolish and helpless in there. Duran did not have the fire to match Ray’s skill.

In Duran’s mind he had to be thinking “This guy gave me a tough fight on my terms when I was in great shape, now I am not in great shape and he is dictating what is happening in here”. He was becoming frustrated.

In the 7th round Leonard really turned it on. He dropped his hands and dared Duran to try and hit him. He wound up with punches. Ray, through his action, was telling Roberto he wasn’t man enough to be in there with him. 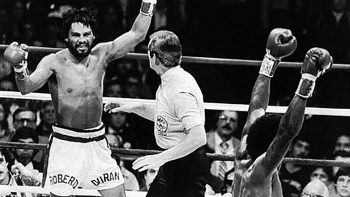 In the 8th round Roberto just threw up his hands and quit. He didn’t appear to be hurt, he just tuned to the referee and said he was done. People at ringside and those watching around the world were stunned by this. It was so far away from the image of Duran as to be completely unbelievable. Something serious had to have happened. In that one moment, Duran’s career went up in flames. His victory over Leonard five months earlier was forgotten. He was labeled with the worst name in boxing; “A quitter”. How could this have happened.

Roberto has never really given an explanation. It is likely he himself really doesn’t understand why he did what he did. It was something that just happened. Some say he got stomach cramps and had to go to the bathroom. It has been suggested he was intentionally throwing the fight and was supposed to go 15 rounds and lose a decision building up a rematch but grew impatient and just decided to end it then. I don’t believe any of this.

Roberto Duran was not ready mentally or physically for this fight. His doubts were preying on his mind. It wasn’t getting hit that was bothering him. In fact, if he had been getting beaten while in a slugfest he most likely would have gone down fighting. What happened here was he was feeling humiliated, and he had no idea how to deal with it. The world was looking at him and he felt like a fool. His reaction was to turn and get away from it. i believe it was as simple as that. Did he regret it? Of course, and for years, twenty years in fact, he continued fighting to prove himself. He never came close to quitting again. In many ways he did vindicate himself, his tough fifteen rounds against Marvin Hagler helped. But Roberto Duran and the words “no mas” will always be linked together. It’s amazing how the actions of just a few seconds can tarnish a reputation for life.