I love theatre and have seen many great performances. I have seen many not so great works too, and some down right awful stuff, but I enjoy almost anything performed live on a stage. It also gives me pleasure to tell others about my experiences in the theatre, and by doing so, to inspire people who may not have had an interest in theatre to go and see what they are missing. 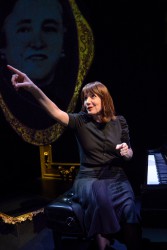 I have just returned from Hartford where I have seen one of those very special performances, one that I wanted to never end. “The Pianist of Willesden Lane” is the true story of Lisa Jura, a 14 year old Jewish girl living with her family in Vienna during the beginning of the Nazi occupation in 1938. Lisa is played by her real life daughter Mona Golabek in this one actor production. Ms Golabek is an internationally celebrated concert pianist who co wrote a book about her mother’s life entitled “The Children of Willesden Lane”. Hershey Felder, remembered here in Boston for his superb performance in “George Gershwin Alone”, which he also wrote, adapted the book for the stage and asked Mona Golabek to play her mother. Though not a trained actress, she takes command of the stage in this incredibly moving story in which she includes playing pieces on the piano while she, in the role of her mother, tells the story of her journey from Vienna to London.

Lisa’s, who’s passion was the piano, and who dreamed of one day playing in recital The Piano Concerto in A Minor by Grieg, has her first experience of how her life was about to change when her piano teacher tells her he will no longer be able to give her lessons as it is now forbidden to teach Jews. Her father is no longer able to continue in his profession as a tailor and turns to gambling to support the family. On one terrible night, Krisatllnacht, he returns home bloody and beaten, but holding on to his winnings from a poker game. It is a single ticket for the Kindertransport, a program set up for Jewish children to be able to leave Austria and go to London. The Jura’s have three daughters, but Lisa is the one chosen to go. At the train station her mother tells her, “Lisa, Hold on to your music, it will be your best friend for life, and I will always love you.” With those words she is off on her journey all alone. 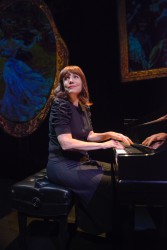 Mona Golabek plays not only her mother but many other major and minor characters in this performance. She tells of living with dozens of other Kindertransport children at a home in Willesden Lane in London. Of the friendships she makes, of the people who inspired and helped her, of the bombings, the destruction and rebuilding of the home, and how she had to continue her lessons without a teacher. She beautifully relates working as a seamstress by comparing it with music, “Each stitch was like another note of music…ending in a beautiful tapestry.” She does this while moving her hands along the piano keyboard to mimic the sewing machine, simply wonderful.

We are told of her playing the piano for the soldiers the night before D Day, and the French Resistance Officer she meets who would later become her husband. So much of this is sad, but it is also very uplifting to see how Lisa and all those with whom she is now sharing her life are able to survive and, more importantly, thrive amid the madness of war.

Ms Golabek is beyond outstanding in this performance. Every word, every note, comes from her heart. She is wonderful at the piano, and her acting skills are amazing as she moves among the many different characters and voices, but what is truly magnificent is how she tells her mother’s story, and how we are brought into her life. There was no one in the audience who wasn’t deeply moved by the story of Lisa Jura, and I am thankful to Mona Golabek for sharing her family and friends with us. 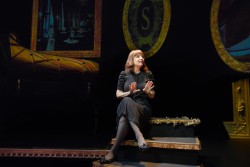 As her performance comes to an end she takes time to tell the audience her story is dedicated “To every parent who had the courage to save their children by saying goodbye.”

Mona Golabek In
The Pianist of Willesden Lane
Adapted and Directed by Hershey Felder
At The Hartford Stage Through April 26
www.hartfordstage.org
860.527.5151