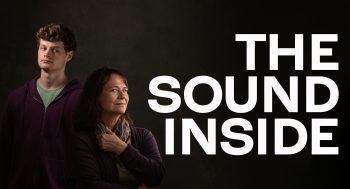 From September 24 to October 16, 2021, SpeakEasy Stage Company will proudly present the Boston-area premiere of the gripping drama THE SOUND INSIDE by Adam Rapp.

Nominated for six 2020 Tony Awards including Best Play, THE SOUND INSIDE is an intensely quiet play that introduces us to Bella Baird, a novelist who, in the seventeen years since she was last published, has almost completely isolated herself from the world.  But everything changes when she meets Christopher, a brilliant but enigmatic student in her creative writing class at Yale. As their friendship deepens, their lives and the stories they tell about themselves become intertwined in unpredictable ways, leading to a shocking request. Intensely intimate and deeply moving, THE SOUND INSIDE is “an astonishing new play… about fiction, both the kind we read and the kind we live.” (The New York Times)

Playwright Adam Rapp made his Broadway debut with THE SOUND INSIDE, which was commissioned by Lincoln Center and received its world premiere in 2018 at the Williamstown Theatre Festival.  A 2006 Pulitzer Prize finalist for his play Red Light Winter, Rapp is also the author of Nocturne (American Repertory Theatre, New York Theatre Workshop), Finer Noble Gases (26th Humana Festival), Stone Cold Dead Serious (A.R.T.), Blackbird (The Bush, London), and Essential Self-Defense (Playwrights Horizons/Edge Theatre), among others.

Director Bryn Boice will helm this Boston premiere production of THE SOUND INSIDE Winner of the 2019 Elliot Norton Award for Outstanding Director, Large Theater for Commonwealth Shakespeare Company’s Universe Rushing Apart: Blue Kettle & Here We Go, Ms. Boice returns to SpeakEasy after having directed the company’s 2020 production of The Children. Ms. Boice also serves as the Associate Artistic Director at Commonwealth Shakespeare Company and is a professor at Salem State University.

Jennifer Rohn (Broadway’s The Kentucky Cycle) and Nathan Malin (SpeakEasy’s Admissions) will star in this production.

JENNIFER ROHN (Bella Baird) is making her SpeakEasy debut with this production.  A 2019 Elliot Norton Award winner for her performance in Dark Room (Bridge Repertory Theater), Jennifer began her professional career appearing in numerous productions created by renowned experimental theatre director Robert Wilson.  She has also appeared on Broadway in The Kentucky Cycle and The Crucible, and in several Off-Broadway productions including Love’s Fire and The Caucasian Chalk Circle (The Public Theater); Romeo and Juliet (The New Victory Theater); The CIVIL warS (Brooklyn Academy of Music); and Another Person is a Foreign Country (Anne Bogart, director/ En Garde Arts). Her regional theater credits are extensive and include work for The American Repertory Theater, The Huntington Theatre, The Guthrie Theater, The Cleveland Play House, The Kennedy Center, The Seattle Repertory Theatre, The Philadelphia Theatre Company, and The Dallas Theater Center.  She toured Europe with Hamletmachine, and appeared at La Scala in Salome (Robert Wilson, director) and at The Barbican Centre in Love’s Fire (Mark Lamos, director). Her television credits include several television commercials, Law and Order, American Playhouse, and the film Crossing the Atlantic. Jennifer teaches at Bennington College.

THE SOUND INSIDE will run for four weeks, from September 24 through October 16, 2021, in the Roberts Studio Theatre in the Stanford Calderwood Pavilion at the Boston Center for the Arts, 527 Tremont Street in Boston’s South End.

For tickets or more information, the public is invited to call BostonTheatreScene Ticketing Services at 617.933.8600 or visit www.SpeakEasyStage.com.