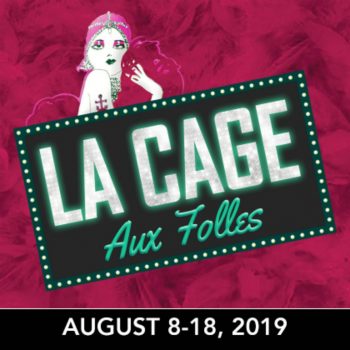 Folles from August 8-18, 2019. This hilarious, heartwarming musical comedy shows what happens when the proprietor of a glitzy drag club comes face to face with a bigoted politician (and soon-to-be in-law), all in the name of love and family.  Featuring Broadway alum James Darrah (Hello Dolly!, Avenue Q) as “Albin” – the drag star of La Cage Aux Folles nightclub, and the love of his life and club owner, “Georges,” played by J.T. Turner (Reagle’s 42nd Street, Anything Goes).  Directed and Choreographed by Susan M. Chebookjian, Music Director Dan Rodriguez, Produced by Robert J. Eagle.

Reagle’s production of the groundbreaking musical comedy features a score by Tony and Grammy winner Jerry Herman (including songs like “I Am What I Am,” “The Best of Times,” and “Song on the Sand”) and a book by four-time Tony Award winner Harvey Fierstein.  Based the play “La Cage Aux Folles” by Jean Poiret.  Presented through special arrangement with Samuel French, Inc.

James Darrah as ALBIN:  James Darrah, Broadway veteran and Waltham native, first appeared on the Reagle stage as a Munchkin in The Wizard of Oz during the company’s second season in 1970. Broadway credits include: Ambrose Kemper in the 30th Anniversary Revival of Hello, Dolly! at the Lunt Fontaine Theatre, opposite Carol Channing; Avenue Q; Boeing Boeing; Hedda Gabler. Some Off-Broadway and Touring credits include: Cornelius Hackle in, Hello, Dolly! opposite Madeline Kahn; 42nd Street (Billy) opposite Jerry Orbach and Tammy Grimes; Silent Laughter; archy and mehitabel; Once Around the City; Billion Dollar Baby starring Kristin Chenoweth; Secrets Every Smart Traveler Should Know. TV credits include Late Night with Conan O’Brien, Law and Order, Christmas at Rockefeller Center; General Hospital and other daytime dramas. James holds Broadway and Off-Broadway stage management credits and spent six seasons as Stage Manager on staff at The Metropolitan Opera. He is on The Board of Governors of The American Guild of Musical Artists. James is in his seventh year as Production and Stage Director for the annual Henry Viscardi School Celebrity Sports Night. James is a former Ringling Brothers and Barnum & Bailey Circus clown and faculty alumnus of their famed Clown College.

J.T. Turner as GEORGES:  J.T. returns to the Reagle stage where he was most recently seen as Moonface  in Anything Goes. His recent performances include Rochefort in 3 Musketeers, (GBSC), Fezziwig in Christmas Carol, (NSMT) Snowbell in Stuart Little, (Wheelock) and Alfie in My Fair Lady, (Lyric). He is the Descriptive Narrator for the PBS shows ARTHUR and MARTHA SPEAKS, as well as episodes of MYSTERY!. J.T. tours with solo shows about Shakespeare, Robert Frost, Ben Franklin and Charles Dickens.