Beware the Ides of March,

But Have No Fear Of Buying A Ticket For This Production

Of Julius Caesar In Providence.

The other night I traveled south to Providence, Rhode Island to see the Trinity Rep’s production of Julius Caesar. This play kicks off their 2015-2016, and it is a great start.This version is set in contemporary times with the government rulers in business or military attire. The set conveys a somewhat decaying aura that fits with the turmoil that is to ensue. Director Tyler Dobrowsky also makes interesting use of a live video camera that projects certain parts of the play onto two walls giving us the flavor of the events being covered in this age of the 24 hour news cycle. There are also occasional news scrolls across the same walls.

The set conveys a somewhat decaying aura that fits with the turmoil that is to ensue.

A nice touch is the string quartet that is situated above the action but in full view of the audience. The music, by Polish composer Henryk Gorecki, is somber and influences the mood. My only quarrel with it is in the second act where it is a bit overdone as the mood has already descended and the audience does not need reminding of that fact.

Stephen Thorne’s Brutus is a perfect balance between the cold blooded conspirator, idealist, and a man who’s lust for power equals Caesar’s.

Caesar is played by Anne Scurria who does a wonderful job as a female but not feminine Caesar. I am not clear as to,or if, a message is being conveyed by having him played as a woman.  Ms Scurria is still called Julius and the pronouns referring to Caesar have all been changed to the femine. Calpurnia is renamed Calpurnius, the male version of the name, and is played by Mauro Huntman. Huntman reminds a bit of Al Bundy and you really can’t blame Caesar for not going to the senate on that fateful March day when faced with the choice of staying home with her husband who appears ready to spend the day in pajamas.  I am certain many will read much into this given that the current presidential election season has begun, but I really didn’t see any overt links to any of today’s politicians other than the fact Caesar is wearing a pantsuit.

Stephen Thorne’s Brutus is a perfect balance between the cold blooded conspirator, idealist, and a man who’s lust for power equals Caesar’s. While he may believe he is working for the greater good, and he does his best to convince himself, the people, and the audience, we find he is another manipulating politician.  It is a complicated role for an actor, but Mr. Thorne does a fine job getting all of these emotions across.

This Caesar, as bloody as any, also has a number of laughs. Fred Sullivan, Jr. as the hypocritical Casca is witty and sarcastic as he first takes the stage, though he has to repeatedly reach for liquid courage from the flask he keeps hidden.

Marc Antony’s playing up to the press and mugging for the camera is very effective.

The funeral oration given by Joe Wilson, Jr.’s Marc Antony is very interesting. The live camera arrives on the scene to broadcast the speech, and Mr. Wilson does a marvelous job

of showing with his eye movements and turn of head how well the deep thinking Antony manipulates the crowd by turning what was expected to be a simple eulogy honoring his friend into a rallying cry for civil war.  Marc Antony’s playing up to the press and mugging for the camera is very effective and will certainly resonate in this age of sound bites.

It is impossible for the Trinity rep to put on a bad production of a Shakespeare play if Brian McEleney is in it. Having seen him in the Rep’s productions of Richard III and King Lear, I have to say he is one of the finest Shakesperaen actors gracing New England stages today. He does not disappoint as Cassius who at first is petty and manipulative as he convinces Brutus to conspire in the assassination of Caesar. Cassius redeems himself in Act II but it is too late. Mr. McEleney is a joy to watch as he practices his stage craft, and I could envision an evening of him doing a solo performance of the works of Shakespeare. He has a wonderful voice and exquisite timing. 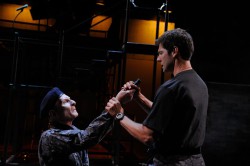 Mr. McEleney is a joy to watch as he practices his stage craft

Some liberties were taken with this production, but they work. Particularly the closing scene, which is incredibly effective. I won’t spoil it for you.

I highly recommend this production even sans the togas. It is interesting, well played, staged, and directed as it shows us how ambition and the lust for power are timeless. Beware the Ides of March, but have no fear of buying a ticket for Julius Caesar in Providence.

Julius Caesar at the Trinity Rep playing through October 11th