Joe Louis Got To 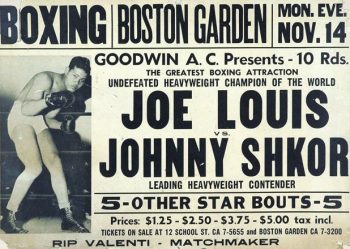 The Greater Boston area has been home to two World Heavyweight Champions; John L. Sullivan and Rocky Marciano, neither of whom ever defended the title there. In fact, even though boxing has always been popular in Boston, there has only been one Heavyweight Title fight held in Beantown. That was the 1940 match between the great Joe Louis and Al McCoy. Interestingly, McCoy was a native of Maine and resided in Waterville though he fought often in Boston.

When it was decided Louis would travel to Boston to defend the championship there were two New England fighters who stood out has the prime challengers to take on the Brown Bomber. One was McCoy and the other was Tony Shucco, a Boston native. I’m not sure why McCoy was picked but many old timers told me they believe, because of his style, Shucco would have been able to give Joe a better fight.

The fight took place on December 16, 1940 at the Boston Garden. A crowd of 13,334 showed up to watch as Louis handed out a one sided drubbing to the very game McCoy. The fight ended when the New England fighter was unable to come out for the fifth round.

The Louis of 1940 was pretty much at his peak and is still thought by many experts to have been the greatest heavyweight champion ever. While McCoy was never a threat, Boston fans did get to see the Champ in action. Nobody complained as the outcome was a forgone conclusion.

So that was the only time Joe Louis would be seen in a Boston boxing ring, or was it? Well, no. Joe never again defended the title title in Boston, But he did return for a couple of exciting appearances a few years later. His second and third visits turned out to be more exciting than his fight against Al McCoy. For even though these bouts were labeled as exhibitions, they were in fact hard fought battles. The second bout in particular.

In June of 1948 Joe Louis had his last fight as champion when he kayoed Jersey Joe Walcott in the 11th round. 7 months earlier Walcott had give Louis all he could handle for 15 rounds while losing a decision many believed he deserved to win. Joe wanted to prove he was the better fighter and did. Most thought he would retire after the fight, and Joe wanted to but he was facing financial difficulties stemming from tax problems he was having with the IRS. Instead of calling it quits he went on a barnstorming tour of “exhibitions” where he figured he could pick up some easy money. Still being champion made him more marketable.

On two occasions during his tour Louis stopped in Boston. His opponent in both matches was tough contender Johnny Shkor (pronounced “score”). Shkor was a hard punching 6’4” battler who weighed in at around 220 pounds for many of his fights. He was originally from Baltimore but fought out of Boston where he was managed by Johnny Buckley. He had a career final record of 52 bouts with 31 wins, 19 losses, and 2 draws. 22 of his wins came via knock out. His biggest victory was a 1947 stoppage on cuts of Tami Mauriello which took place at the Boston Arena. Shkor would also go on to face two future champs, Jersey Joe Walcott and Rocky Marciano.

The first encounter between Louis and Shkor took place at the Boston Arena on November 8, 1948 before 5,518 fans. According to Boston Globe sports writer Clif Keane it was a very spirited affair. And even though they fought with 14 ounce gloves Keane wrote “…there was more action in the four rounds than in Louis’ two titular fights with Jersey Joe Walcott…” Late in the fourth round Louis received a gash over his right eye from a clash of heads as Shkor waded into him. Former champ Jack Sharkey worked Shkor’s corner and former Welterweight Champion Jack Britton was the third man in the ring.

A year and a week later the two would go at it again, this time at the Boston Garden. At this point Joe had announced his retirement and, though he denied it, was testing the waters for a title match against the new champion Ezzard Charles.

Their “rematch” was scheduled for ten rounds, and again they wore 14 ounce gloves. Before 8,471 fans they picked up where they had let off. Louis came out strong and dropped Shkor three times in the first three rounds, once in the second and twice in the third. It appeared the fight wouldn’t go further than the four rounds the two went the year before, but Shkor proved tough and durable while Louis was not in top condition. The former champ coasted a bit but still had to keep Johnny in his place as the former sailor was not giving up. Again, the fans got more than their money’s worth. Louis had nothing but praise for Shkor after the fight telling reporters Johnny had improved since their first encounter and should be taken seriously as a contender.

While Joe kept denying he was heading for a comeback, 10 months later he was in the ring with Champion Ezzard Charles in what was a brutal fifteen round battle won by the Cincinnati Cobra. Louis continued to fight after that but never fought for the title again. Nine fights later he would be kayoed by Rocky Marciano in a fight that is still painful to watch. The great champion stayed on too long.

Boston fans were lucky in 1948 and 1949 to see the great Joe Louis in action, especially since he was in with a guy like Johnny Shkor who gave it his all.

(I want to thank my friend Dan Cuoco for providing me with news clippings from the bouts.)