Recently, I read the latest biography of Muhammad Ali. In it the author describes  former Heavyweight Champion Joe Louis as having been “docile”. This view of not only Joe but so many other black celebrities who were in the public eye before the 1960s has become all too commonplace. It has been said that Joe Louis played the “white man’s game”, that he went along to get along, that he remained silent in the face of injustice. The same has been said about Jackie Robinson and Louis Armstrong to name just a couple of others. 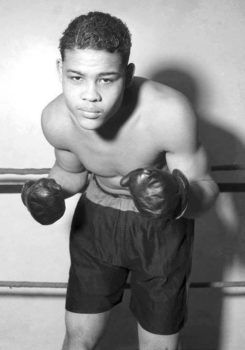 During the nervous breakdown our country was having during the 1960s it became cool to denigrate many who had suffered and struggled in the past. The mindset had become one of having to show your convictions by having a public temper tantrum. To acknowledge there had been people who were able to accomplish great things while not going out of their way to alienate others was considered being subservient. If you weren’t screaming at the top of your lungs you weren’t serious about change. And if you were black it meant you were being “docile”. Ali belittled Louis for this as did Miles Davis when talking about Louis Armstrong.

In the case of Joe Louis it worked in managing to erase all he had accomplished when it came to the cause of Civil Rights. Not only in what he did concerning policy where he had refused to box exhibitions before the troops unless the audiences were integrated or when he would become the first black man to play in the Professional Golf Association, but also in all he did to bring people together.

You see, Joe Louis set a tone. Joe’s actions outside of the ring mirrored what he did in the ring where he stood strong and forceful yet always dignified and respectful of his opponents. While Louis may not have talked a lot and never bragged, he certainly got the job done. This was true in and out of the ring. Jackie Robinson once said that baseball would have gone another ten years before being integrated if it had not been for Louis. 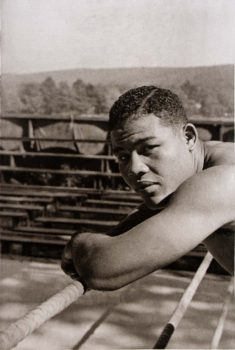 Louis did something else; He brought people together through leading by example. He showed that being strong did not mean being obnoxious. If you were going to emulate Joe Louis, and most young people wanted to, you would have to show respect to others and earn it yourself. You would act like a gentleman in the best sense of the term. My, how times have changed. The way celebrities, dare I say role models, behave influences people, especially young people. In the case of Joe Louis, he showed us how it should be done.

This all brings me to a conversation I recently had with a good friend of mine named Paul. He related a story  from his time as a wrestler in high school.

Paul was a huge boxing fan but seeing as his high school did not offer boxing he joined the wrestling team. He hadn’t been terribly successful and had yet to have his “glory moment” when in 1982 he was matched up with an opponent with comparable abilities. They were paired up to go at it in a junior varsity match which normally did not garner a lot of attention. However, in this case the match took place just before the varsity matches so the gym was packed. On top of this, Paul’s brothers were there and got the place going crazy in support of him. As the young grappler stepped into the circle he could hear the crowd shouting his name. It was nice to have the encouragement but also meant the pressure was on.

In Paul’s head he was thinking of the focus Roberto Duran had before his first fight with Ray Leonard. He wanted to carry that same type of determination into this match, and he did. Paul came out on fire and in the second period he pinned his opponent. When he heard the referee shout “pin” his first impulse was to stand up and pump his fist into the air. You can imagine his excitement and the rush he must have felt.

But, then something happened. In that instance an image flashed in his mind. No, it was not one of Roberto Duran gloating as he got the decision over Leonard. Instead, he suddenly saw Joe Louis in 1941 calmly walking away from the fallen Billy Conn. Joe was “cool as a cucumber” after having finally caught up with Conn who had been giving him an awful time of it. Joe hadn’t jumped around doing a victory dance. No, he had shown respect to his defeated opponent. It was this image the young Paul
wanted to emulate. He wanted to be seen as winning with honor and dignity, and what better role model for such behavior than Joe Louis. You have to remember, this was 1982 and by this time it had become the norm to practice self praise when winning. Paul would take another road. In his moment of competitive sport’s glory he would think back to footage he had seen of a great champion in victory. For Paul’s win that day in a high school gymnasium meant as much to him as Joe’s win against Conn at the Polo Grounds meant to Louis, and Paul got it right.

He could not have been blamed if he had pulled a Duran or an Ali and jumped all over the place in celebration of his big win. It would not have been shameful had he done that. It would have been entirely understandable, but showing deep character means keeping things in perspective. It means showing respect for those whom you compete against whether you have come out victorious or on the losing end. It means having class. 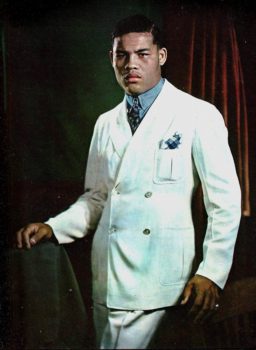 Joe Louis had died the year before Paul’s big moment came, but the legacy of this very great champion lived on the heart of that young high school wrestler. We’d all be better off if there were a few Joe Louis’ around today to help guide us in how we behave towards one another. We’d also be better off if more young people acted in the manner 16 year old Paul did back in 1982. On that day he showed not only that he could win a wrestling match, but that he could also be a champion.