Played In Requiem For A Heavyweight 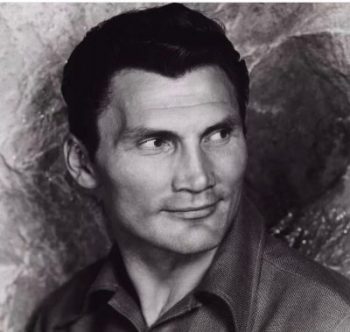 If looks could win fights Jack Palance would have been heavyweight champion of the world. His face appeared as if it were cut out of stone and he had the persona to go with it. While well liked, he was known as someone who didn’t pull his punches, figuratively or literally. At 6’3”’ and 200 pounds, he was built lean and hard and was an imposing figure.

He was born Volodymir Ivanovich Palahniuk on February 18, 1919 in Lattimer Mines, Pennsylvania to Ukrainian immigrants. At an early age he decided he didn’t want to follow in his father’s footsteps working as a coal miner. After 39 years working in the mines his father died of black lung disease. As a young man it bothered him that his mother was forced to buy groceries at the company store when the same goods could be had for cheaper in nearby establishments. 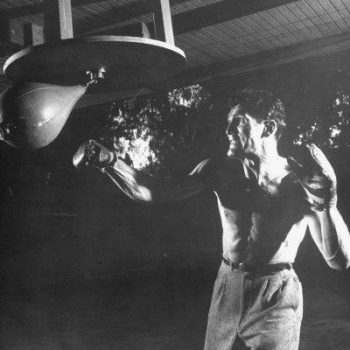 A natural athlete, Jack earned a football scholarship to the University of North Carolina but dropped out after two years. It was then that he decided to take up boxing. He fought under the name of Jack Brazzo and reportedly won his first 15 fights with 12 coming by way of knockout. I was unable to verify this record, but it is a fact that he took on future heavyweight contender Joe Baski in 1938 losing a four round decision. It was after the Baski loss that Palance left boxing for a career in acting. He later recalled, ”…Then I thought, ‘You must be nuts to get your head beat in for $200.’ The theater seemed a lot more appealing…”.

His career was sidetracked by WWII. He was seriously injured when bailing out of a B-24 Liberator that had caught fire. He required facial surgery for wounds he received. When later asked if the plastic surgery had enhanced his looks he responded “If it is a ‘bionic face,’ why didn’t they do a better job of it?” After the war he returned home and to the coal mines. He then enrolled at Stanford University where he earned a degree in journalism. He worked for a time as a sportswriter while resuming his acting career having now changed his name to Jack Palance. 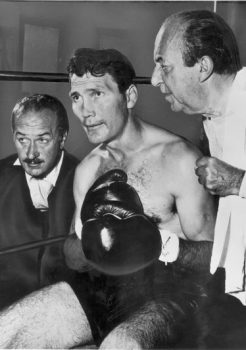 In 1956 he got to put his boxing experience to work when he starred in the Playhouse 90 production of Requiem For A Heavyweight. Most people remember the movie version that had Anthony Quinn in the leading role. With a screenplay written by Rod Serling, another former boxer, the Playhouse 90 performance was aired live on television on October 11th of that year. Co- starring Ed and Keenan Wynn along with Kim Hunter, this version is different from the big screen production.

The character Quinn played was named Mountain Rivera, while Palance’s was Mountain McClintock. Palance brought a more nuanced tact to the role of the over the hill boxer who now had to find his way in the world outside of the ring. His experience as a boxer certainly aided in his being able to dig more deeply into the role. The two versions show the fighter suffering from pugilistica dementia, while also struggling with his loyalty to his manager who wants him to continue boxing even after being warned by a doctor that one more fight could kill him. It’s a touching and tragic story enhanced by the grim fact it is something that happens time and again in boxing. 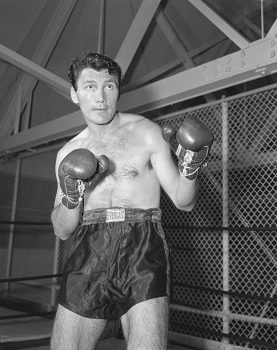 While aired live, the performance was saved on film and is available on Amazon and Youtube. I highly recommend it both for the outstanding acting done by Palance and the hard-hitting screenplay by Serling. While the big screen version is an excellent movie, Quinn’s Rivera tends too much to the pathetic side and sinks into caricature while Palance’s McClintock has a depth and realism that makes for a very moving performance. While Quinn’s character remains under the spell of his manager, Palance’s McClintock struggles to break away in a pursuit to regain his self-respect. Palance brings complexity to the role, for which he won an Emmy. It is interesting to watch the two versions and compare them.

Palance went on to have a legendary career in film, while never feeling at home with the Hollywood crowd. A life long vegetarian and health fanatic he stayed fit all of his life. In 1991 while accepting the Academy Award for Best Supporting Actor for his role as Curley in City Slickers he brought the audience to its feet when at age 73 he dropped to the floor and did one armed pushups. 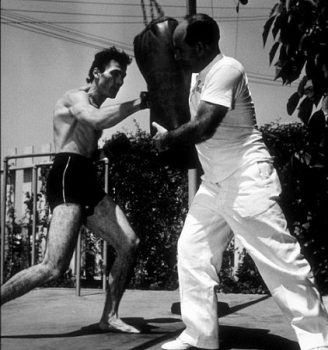 I wish more information was available about his boxing career, but there is no doubt that any of his opponents would have felt at least a brief chill when looking across the ring at Jack Palance.

While a genuine tough guy, Jack liked to spend his free time painting and writing poetry and fiction. On November 10, 2006 Jack Palance passed away at the age of 87 of natural causes. A true original, he will never be forgotten.