From January 6 to February 4, 2017, SpeakEasy Stage Company will proudly present the New England Premiere of HAND TO GOD, the devilishly smart new comedy about good and evil, sex and sin, written by Robert Askins. 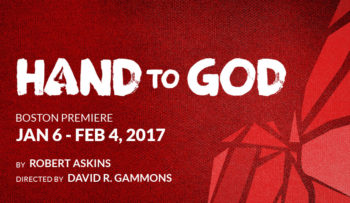 Described as “Sesame Street meets The Exorcist” by the New Yorker, HAND TO GOD tells the story of an awkward Texas teen named Jason, who spends his afternoons at his local church, practicing for the Christian Puppet Ministry run by his widowed mother. All hell literally breaks loose, however, when Jason’s puppet Tyrone takes on a shocking and dangerously irreverent personality all its own. Nominated for five Tony Awards including Best Play, HAND TO GOD explores the startlingly fragile nature of faith, morality, and the ties that bind.

Like the young protagonist in his play, HAND TO GOD playwright Robert Askins grew up in a small Texas town, lost his dad at a relatively young age, and even participated in the Christian Puppet Ministry which his mother ran at the local Lutheran church. He didn’t start writing plays until he got to Baylor University, which is where he met playwrights Romulus Linney and Horton Foote. These celebrated writers encouraged Mr. Askins and provided a connection to New York’s Ensemble StudioTheatre, which is where, in 2011, HAND TO GOD had its premiere. In addition to his Tony nomination for HAND TO GOD, Mr. Askins has received two EST/Sloan grants, the Helen Merrill Emerging Playwrights Award, and an Arch and Bruce Davis Award for Playwriting. His most recent play Permission, had its world Premiere Off-Broadway in spring 2015 at MCC Theater.

HAND TO GOD will run for five weeks, from January 6 through February 4, 2017 in the VirginiaWimberly Theatre in the Stanford Calderwood Pavilion at the Boston Center for the Arts, 527 Tremont Street in Boston’s South End.

Ticket prices start at $25, with discounts for students, seniors, and persons age 25 and under.
For tickets or more information, the public is invited to call the box office at 617.933.8600 or visit www.SpeakEasyStage.com .