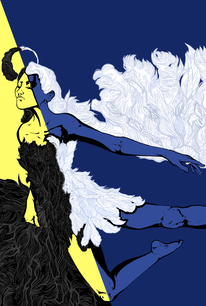 Featuring big band jazz music as well as a company of tap and jazz dancers, Swan Lake in Blue: A Jazz Ballet tells the story of a Broadway producer who falls madly in love with a burlesque dancer, Odette. He then discovers that she is under the control of a terrible mob boss and is being forced to perform nightly at The Swan Club. Passion, betrayal and mistaken identities ensue—will Odette fly away from her past or stay caged forever?

Choreographer Ilyse Robbins is a celebrated tap dancer, having danced with tap legend Gregory Hines. She has won IRNE awards for Best Choreographer for Dames at Sea, How to Succeed in Business…, and 42nd Street, among others. She is thrilled to be staging to Bass’ creation. “This production is the perfect complement to GBSC’s commitment to telling familiar stories in fresh new ways,” says Robbins.

Composer and creator Steve Bass says of the Premiere, “Jazz was my first musical love, and I’ve also always loved tap dance. This piece is ballet at its core— storytelling though dance and instrumental music—and I have replaced the classical orchestra with a jazz big band and replaced the ballet dancers with tap, jazz, and lyrical dancers. The idea was to have something that looked and sounded much closer to a Broadway musical, but with no words—a Jazz Ballet. I immediately knew I wanted to base it on Tchaikovsky’s Swan Lake and I began adapting the classic fairy tale into a 1940s New York City setting.”

SARA COOMBS (Odette/Odile) is an actress/choreographer/teaching artist based in NYC. As a performer, she was most recently seen on the GBSC stage as Doris Walker in Miracle on 34th Street. Other GBSC credits include: 42nd Street, Thoroughly Modern Millie, Dames at Sea, She Loves Me and Being Earnest. She has choreographed Off-Broadway shows, national tours, and many musicals in regional theatres. Sara is a member as well as thechoreographer of Manhattan Shuffle: NYC’s Premiere Song and Tap Trio – manhattanshuffle.com. With over 15 years of teaching experience, Sara has taught tap dance and theatre at Broadway Dance Center, Peridance Capezio Center in NYC, and at multiple theaters throughout New England. She holds a B.F.A in Musical Theatre from The Boston Conservatory. Instagram: @coombaloo

What: Swan Lake In Blue: A Jazz Ballet

When: February 15 through March 1