Louis had been a very active champion and this was to be his 24th defense of the title. Up until 1942 Joe defended the title often and always successfully. In 1941 alone he had met eight challengers including his historic match against Billy Conn. Things would change at the beginning of 1942 as the country was now focused on World War II. After defeating Abe Simon in March of 1942 Joe would not defend the championship again until his rematch with Billy Conn in June, 1946.

Louis stepped up and supported his country during the war by enlisting in the Army. During this time he fought a number of exhibition matches at Army bases around the world, but for such an active fighter the four year layoff took its toll. The Joe Louis who returned to the ring after the war was older and slower than the devastating fighting machine who had dominated the division throughout the 1930s and into the 40s. While Joe’s physical abilities may have faded a bit, he was still a very great fighter.

The long awaited rematch between Louis and Conn turned out to be a disappointment as it didn’t come close to having the excitement of their first go. After the Conn fight Louis dispatched Tami Mauriello in the first round of their fight. At this point the heavyweight division was looking quite weak with no truly outstanding challengers.

Promoter Mike Jacobs decided to go with a former sparring partner of Joe’s for his next title defense. Jersey Joe Walcott was a very slick boxer with a solid punch who never seemed to get a break. Walcott had been a pro since 1930 and was now having a fairly successful run of it. He had only lost 3 of his last 21 bouts which took place since 1944. He avenged all three of those losses. Joe had also missed a few years during the war not fighting since being stopped by Abe Simon in 1940. Walcott was back and giving it one more try in an attempt to get a title shot.

It should also be noted that early in his career Walcott had been trained for a brief time by Jack Blackburn. Blackburn ended up taking on Joe Louis as a pupil so Walcott and he parted ways. 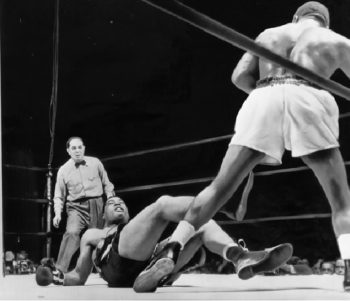 Jersey Joe wasn’t given much of a chance of defeating Louis who entered the ring a ten to one favorite. The challenger made the oddsmakers look a bit silly when he decked the champion in the first round. The two fighters were mixing it up with Louis having Walcott against the ropes. Suddenly, Walcott landed a short right hand that was a solid punch but also caught the Brown Bomber off balance. The Champ went down for a two count.

In the fourth round Walcott would again deck Louis with another right hand. This time Louis was down for a count of seven and hurt. Louis got up and fought his way out of trouble avoiding numerous rights thrown by the challenger. 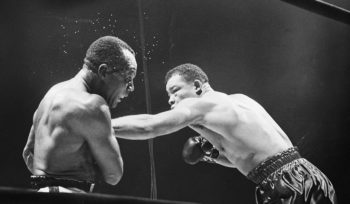 The rest of the fight was a cat and mouse game with Walcott using his brilliant boxing skills, his feints and shuffle, to keep Louis off balance. Louis’s left eye was swelling while Walcott had no marks on his face. Louis, while determined and steadfast, just could not land a solid combination on Walcott. Jersey Joe, who had started the fight quite aggressively, seemed to be content to keep at a distance as much as he could and rely on his speed tasty out of trouble. Perhaps he was thinking back to when Billy Conn fought Louis the first time.

Before the start of the 15th and final round Walcott’s cornermen told him he had the fight and he should play it safe. He followed their instructions and spent the final round moving and circling Louis intent on not being knocked out.

When the decision was announced two of the judges gave the fight to the champion while the referee scored it for Walcott. The crowd also thought the challenger had done enough to win.

It has been written that even Joe Louis believed he lost the fight. There are two reasons for this. One, Joe tried to leave the ring before the verdict was announced. Second, Louis went over to Walcott and told him he was sorry.

In an interview years later with Curt Gowdy Louis made it clear that while he was not happy with his performance he truly believed he did enough to win. He said he left the ring early because he was disgusted with himself and felt he should have done better. And as far as why he told Walcott he was sorry, Joe responded “I said that to everyone I beat.” Louis felt that in order for Walcott to win the title he would have had to fight more aggressively and not run so much. Apparently, the officials agreed with him. The press, however, did not. 21 out of 32 boxing writers that were polled said they saw Walcott as the winner.

In reality, this was a tough fight to judge. While Walcott fought beautifully, he also seemed to be playing it safety first. It is difficult, especially in that era, for judges take a title away from a champion when the challenger hasn’t won it decisively. It should also be remembered that the scoring of the fight was on the rounds system, so the two rounds where Walcott scored knockdowns did not count anymore than the other rounds he won. Even if it had been scored on points Louis would have won.

The two would meet again a little over six months later. Walcott would once again floor the champion, but Joe Louis would show the old fire in the 11th round when he knocked out Walcott with a blistering combination. Louis would announce his retirement after the fight, but unfortunately, he would’ve to make a comeback because of financial problems.

Jersey Joe would go on to fight for the title three more times finally winning it in the third try against Ezzard Charles. He was 37 years old at the time.

While the first Louis/Walcott may not have been the greatest Heavyweight Championship bout of all time, it was certainly an interesting one and very much worth watching.