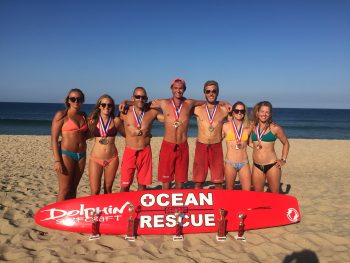 Ogunquit, Maine is known for, among other things, the great performances staged each year at the Ogunquit Playhouse. Unfortunately, the theatrics in this beautiful seacoast town are not confined to the stage of the Playhouse. The town with a year round population of just over a thousand residents has constant drama in its government. The players seem to be continually at war with one another, and quite often these battles become highly personal. The latest one playing out has to do with the leadership of Ogunquit Ocean Rescue.

At the end of June this year the interim Town Manager Matthew Buttrick decided to replace the Captain of the lifeguards, JP Argenti, with the incoming Fire Chief Russell Osgood. Even though Mr. Osgood has no experience as a lifeguard and is not certified for the position it was felt he could handle the job. This was done without public input, and it is unclear what, if any, input the Select Board had with the decision. The Town manager has said this was done to reduce the amount of department heads responding directly to him. Others have said it was because Mr. Argenti was pushing for pay increases for the lifeguards. The possibility that this was done for personal reasons has also been floated. The Town Select Board has remained silent on the issue other than to approve the appointment of Mr. Osgood as Lifeguard Captain.

The upshot of all of this is that Mr. Argenti, a twenty year veteran of Ogunquit Ocean Rescue and Captain for the past eight years has been dismissed and is no longer a member of Ogunquit Ocean Rescue. An additional fifteen lifeguards have either resigned or have signaled they will not be joining the service when scheduled to do so. Among these are the most experienced members of Ogunquit Ocean Rescue. This has all been happening just as the summer season is kicking into full swing. It is also a year that is seeing a 30 year high in lifeguard shortages across the nation, and an increase in drownings throughout New England.

Over the past ten years I have spent a lot of time on the beach at Ogunquit. It is listed as the 7th most beautiful beach in the country, and it certainly deserves that designation. It is a breathtaking seashore with magnificent sunrises and sunsets, wonderful clean water, and a river with a strong current that flows into it. It can also be a bit treacherous as the sands are constantly shifting making for unpredictable riptides. On a typical beach day upwards of 20,000 people will pour onto the 1.5 mile long beach. When staffing is at full capacity there will be 17 lifeguards looking out for the public that is visiting. This out of a full compliment of 35. Most years the guards are about equally divided between male and female.

On a typical beach day upwards of 20,000 people will pour onto the 1.5 mile long beach.

Guards also have to deal with such things as unruly people, enforcing regulations regarding alcohol and smoking, finding lost children, administrating aid to people suffering from heat related problems and even hypothermia caused by being in the cold water too long. They help disabled people on and off the beach. While doing all of this, team members also have to keep watch for people who may be getting into trouble in the water. Riptides are a major issue that can prevent swimmers from reaching shore. The lifeguards have to keep constant watch for signs that the water may be becoming more dangerous and remain alert for the dangers caused by these changes.

If all that isn’t enough, the members of Ogunquit Ocean Rescue also assist people out of danger and back to shore  and prevent them from entering dangerous areas. They provide patrons information, perform water testing for Maine Healthy Beaches, monitor the plovers and the dunes, while on slow days (if there can be such a thing) they clean up the beach and do workouts and more training.

When jumping in to save a swimmer in distress the lifeguard puts him/her self in extreme danger. This is where the training and proper use of equipment pays off.

On top of all that, the most dangerous part of the job is springing into action to save swimmers who are in imminent danger of drowning. This is most common near the mouth of the river where the current becomes very strong during the changing tide as the water drops off and becomes colder as it enters the ocean. When jumping in to save a swimmer in distress the lifeguard puts him/her self in extreme danger. This is where the training and proper use of equipment pays off. Knowing how to maneuver the jet ski and board is a difficult skill to acquire but pays off when the time comes. When a life is in danger these “kids” take on a whole different aura of importance. They are highly skilled professionals, well trained, with the courage to risk their lives to save others.

In the conversations I have had with JP Argenti over the years I have not only been impressed with his professionalism and knowledge of the beach, but also how steeped in the history of Ogunquit Beach he is. His dedication to his job and love for the area runs deep. He and members of the team could often be seen there after hours when he felt their services might still be needed.

Ogunquit Beach has a long and colorful history. There is some evidence the first lifeguards served on the beach in 1909 as tourism began to grow. At the time they were a volunteer group. In 1925 the Village of Ogunquit took control of the beach through eminent domain and it was designated a public park. The following year the Ogunquit Village Improvement Association set up the first publicly funded life guard service. A young Bette Davis was a member of that original group of life savers and wrote about her time with them in her autobiography.

For many years only five lifeguards patrolled the beach. They would use a lifeboat when attempting to save people, but the techniques were not what they are today. In 1946 a lifeguard drowned and with the boat in disrepair, funding was increased.

Another incident in 1981 led to a further increase in funding when a child was pulled out to sea and never recovered. Over the years funding has been increased, but at times it has also been reduced. When JP took over as Captain he fought to increase funding and improve training and equipment. He did this to ensure the public would be safe by having the best lifeguards possible.

The current starting pay rate for lifeguards posted on the Town of Ogunquit website is $18.00 per hour with a maximum of $21.50. There are no benefits included. I also looked to see if any bonus was given to those who worked last year in the midst of the pandemic while the beach was still crowded and the risk of infection was high. There was none even though parking revenue to the town was at a healthy level.

What draws a person to seek employment as a member of Ogunquit Ocean Rescue? JP told me it is a combination of working at the beach along with the camaraderie, adventure, risk of the job, an interest in the medical fields as well as the friendships that are built. The biggest satisfaction is found in knowing the role they all play in keeping people safe.

As with any professional, they expect a good measure of respect, something that is lacking in the town.

Pay is an important factor especially among the older and more experienced lifeguards who may have families to support, but it is not pay alone that draws them. They take extreme pride in their profession. As with any professional, they expect a good measure of respect, something that is lacking in the town.

The veteran guards play a very important role in helping the younger and less experienced members of Ocean Rescue learn the profession.

The veteran guards play a very important role in helping the younger and less experienced members of Ocean Rescue learn the profession. It is vital these veterans are there to pass on their wisdom. This is very serious work and there is no substitute for the skills that have been gained by having been on the job for a period of time. It looks like most of these top lifesavers are now gone.

The revenue brought in from fees charged for parking in the lots near the beach is a major source of income for the town. The fees have been raised and the hours when they are required have increased. People who pay these charges expect to have a level of protection while on the beach. That safety net is now in question.

Those active in town politics squabble over just about anything. The old saying that it takes a village doesn’t appear to apply in this hamlet of just 4 square miles. Most of the time these arguments and the petty backbiting that goes along with them don’t mean a lot. However, in the case of Ocean Rescue, people’s lives are on the line. It is a time for leadership and full transparency in the Town of Ogunquit. I have to wonder how much time the members of the Select Board have spent on the beach observing Ocean Rescue in action? I can only hope it doesn’t take a tragedy to bring people to their senses.

Ogunquit Ocean Rescue has been an elite force for years now. You would be hard pressed to find another life guard service that comes close to how the team under JP Argenti has performed. The Town of Ogunquit was lucky to have them; it’s too bad they don’t realize this.