I saw the Seaglass Chorale perform this work by Ola Gjeilo last year and it is positively beautiful. The music and photographs are a perfect match. The voices and orchestra soothe the soul.

“The voices and orchestra soothe the soul.” 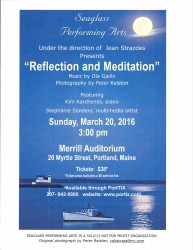 Seaglass Chorale of southern Maine will present its debut concert, “Reflection and Meditation,” at Portland’s Merrill Auditorium under the direction of Jean Strazdes. The concert, scheduled for March 20, introduces the music of contemporary Norwegian composer Ola Gjeilo to the Merrill audience and will be performed against a backdrop of images by Maine photographer Peter Ralston. Selections include Sunrise Mass, Across the Vast Eternal Sky, Dark Night of the Soul, and Luminous Night of the Soul.

Tickets are available through PortTIX for $38 with special rates for groups of 15 or more. For more information, see www.tickets.porttix.com, Email: www [dot] boxoffice [at] porttix [dot] com or call 207-842-0800.

For The Arts In Natick

An Evening To Soothe The Soul

The program I was handed at the door as I entered the Center For The Arts In Natick read “In Concert, Jonathan Edwards”. I have seen Mr. Edwards perform on a number of occasions and I have never felt as if I was at a concert. Spending an evening with Jonathan is much more than that. Even though I am sitting in a performing arts venue I feel more like I have been invited into his home to share a night of music, stories, laughs, and warmth. Edwards has yet to disappoint me and the other night in Natick was no exception.

…there was never a dull moment.

From his opening song “Down In The Woods” until his closing encore two hours later with the Stephen Foster classic “Hard Times” there was never a dull moment. There were plenty of old favorites going back to his first album along with a nice taste from his latest and most personal work “Tomorrow’s Child” and many from in between.

In two of his new songs we learn much about Jonathan. In the very touching “Jonny’s Come Home” Edwards talks about being given up for adoption shortly after his birth and of how he found his birth mother forty years later. It was a happy reunion. He and his 96 year old mother are still close. The song also tells of his own experience in giving up his daughter Brenda for adoption, “I never thought I’d had to do what was done to me.” They, too, reunited after years had passed.

If all of this is beginning to sound a bit sad, it isn’t at all. By listening to the songs and hearing Jonathan tell stories, and he is a wonderful storyteller, you understand why this was much more than a concert.

Edwards has yet to disappoint me and the other night in Natick was no exception.

Going back to his eponymous first album Mr. Edwards sang Emma, Sunshine, Don’t Cry Blue, and what is probably his best-known song Shanty. It is ironic that Shanty has become so well known seeing that it got no radio play when it first was released. The censors at the time had figured out what it meant “to get a good buzz on” and were not happy with it; however, the public loved it as did the audience in Natick putting their hands together upon hearing the first few notes on the mouth harp.

Jonathan is also terrific to listen to between songs. His stories are always so interesting, and he can be very funny. While struggling to get one of his guitars to rest in its stand he told it to stay put, he then quipped “The older we get the more inanimate objects need personalities.” And when introducing the song  Mole In The Ground he said “Now that is a title that really excites people.” The crowd loved it.

“The older we get the more inanimate objects need personalities.”

Gracie, from his new album, is a lovely song celebrating his second daughter. Grace is an accomplished musician in her own right and performs on occasion with her father. Talent definitely runs in the family. Sandy Girl is a foot tapping love song to the joy of Jon’s life and soon to be wife. I noticed that Sandy is a bit shy about having the song played in public, but it is also apparent how much in love she and Jonathan are.  Ain’t Got Time, Girl From the Canyon, Sailboat, The Beatles She Loves You, Evangeline, My Love Will Keep were also included in this wonderful evening.

Jon was accompanied by his “band” the extraordinary Tom Snow on keyboard.

Jon was accompanied by his “band” the extraordinary Tom Snow on grand piano, keyboard, and backup vocals. During Shanty they did a great dueling piano and guitar. They make it look easy and obviously love performing together. What a joy it is to see and hear such talent. These two elevate each other musically and get a great natural buzz playing together.

We are lucky to have Jonathan Edwards here in New England. He plays many nights, and if you haven’t yet seen him be sure to stop in the next time he is in your area. I can guarantee if you see him perform once you will go again and again. I got a good buzz on and didn’t even have to inhale.

For album information, concert dates, and lots of great information go to http://www.jonathanedwards.net

For info on Tom Snow and his album Tom Snow Friends go to http://tomsnow.com

“Shanty” performed by Jonathan and Tom

When blues legend James Montgomery plays the harmonica, he “brings it on home”. Whether it’s recording with Kid Rock, sitting in with Gregg Allman, or fronting his hot band of thirty years, Montgomery plays with authority. While growing up in Detroit he learned first-hand from the masters – James Cotton, John Lee Hooker, and Jr. Wells – at the legendary “Chessmate.” Over the years, he’s carried on in the tradition and continues to be a vital presence in Blues as one of the most dynamic performers on the scene.

James Montgomery and his band will be playing live at Jonathan’s Ogunquit on Friday, November 6, 2015 at 8:00 p.m.

In 1970, while attending Boston University, Montgomery formed the James Montgomery Band. His inimitable (oh yeah, he majored in English) harmonica playing combined with his incredibly energetic live shows led to the band’s quick ascension on the New England music scene. Within two years, the James Montgomery band was among the hottest acts in Boston along with J. Geils and Aerosmith, and they were quickly signed to a multi-album deal with Capricorn Records.

Montgomery has toured with many major artists, including Aerosmith, Bonnie Raitt, Bruce Springsteen, the Allman Brothers, Steve Miller and others. He has jammed on stage with B.B.King, Buddy Guy, John Lee Hooker, Jr. Wells, James Cotton, Charlie Daniels, Bonnie Raitt, Greg Allman, Laverne Baker, Patti LaBelle, and Peter Wolf among others, including an impromptu session with Mick Jagger at New York’s “Trax”
Over the years Montgomery’s band has been a springboard for many musicians. Members of his band have in

Back by popular demand, James Montgomery has become a regular at Jonathan’s Ogunquit. Coming up in the afternoon, grabbing dinner at Jonathan’s, playing some music and staying over in Ogunquit…They love the set up and so do their fans!
The James Montgomery Band will be playing live on Friday, November 6th, 2015 at 8:00 p.m. Tickets are available on line at http://tickets.jonathansrestaurant.com Tickets start at $22.50.

For more information about the concert please visit Jonathan’s Website.