This past week the world lost a giant of musical theater, the legendary lyricist and composer Stephen Sondheim. One of the quotes attributed to Sondheim struck a chord with me.

“The dumbing down of the country reflects itself on Broadway. The shows get dumber, and the public gets used to them.”

If we replace the word Broadway with Boxing the quote can just as easily apply to the current boxing scene:

“The dumbing down of the country reflects itself in every aspect of boxing. Boxing gets dumber and the public gets used to it”.

Anyone who has seriously studied boxing history is aware the sport has always reflected the society that surrounds it. That still holds true for today. Just consider one aspect—music. The great golden age of Jazz, musical theater, the Big Band Era and Rock and Roll, all coincided with the golden age of boxing from the 1920s to the 1950s.  When the heavyweight championship of the world mattered far more to society than it does today celebrity boxers such as John L. Sullivan, Jack Johnson, Jack Dempsey, Joe Louis, Rocky Marciano, Patterson, Liston, Ali and Tyson were not just important to the sport, they were also pop culture icons who were reflective of the era in which they fought. Today’s pervasive junk culture, where mediocrity is celebrated and flash over substance is the norm, has infested virtually every aspect of society and our lives, including boxing. It’s very appropriate to the times that most people–outside of those who still follow this sport–cannot name the current heavyweight champion, or the one who preceded him.

“Today’s world champions and contenders are at the lowest caliber it has ever been in over 100 years”.

If you want to dumb down and ruin a professional sport, then boxing should be your template. No other sport has experienced the type of out of control anarchy that has plagued professional boxing for the past several decades. Aside from the industry’s lack of integrity, coherence, or respect for its fans, the boxing skill (or lack thereof) of the majority of today’s world champions and contenders are at the lowest caliber it has ever been in over 100 years.

“Skills common among champions in decades past, are impossible to acquire today”.

I’m not blaming the boxers for their lack of skills. It’s not their fault. Every fight today, with rare exception, is a dumbed down facsimile of what a match between top professional boxers used to look like. Fulton and Figueroa had the heart, desire and conditioning but lacked the subtle skills of a seasoned professional boxer. Such skills, common among champions in decades past, are impossible to acquire today. Aside from a dearth of competent trainers today’s boxers are not exposed to the type of competition that over time would add to their experience and improve their performance. From the 1920s to the 1960s boxers had, on average, 60 or more professional fights before getting the opportunity to fight for a world title. A boxer with less than 20 fights was still considered a work in progress. Today the average number of fights to a title is 10 to 20. Going into their fight Figueroa and Fulton had only 19 and 22 fights respectively. Sixty years ago their limited professional experience might have entitled them to an eight round preliminary match in the old Madison Square Garden—if they were lucky. A title fight pitting these novices against the then current world bantam or featherweight champions (think Eder Jofre, Rubin Olivares, Alexis Arguello) would never even be contemplated.

“Fulton and Figueroa, like so many others, are not being taught properly”.

Even taking into account their lack of professional experience it was apparent that Fulton and Figueroa, like so many others, are not being taught properly. Instead of moving about the ring with the speed and footwork expected of featherweights they fought like amateurish heavyweights trying to overwhelm the other with power punches. Feinting, timing and judgement of distance were absent from their limited repertoire. There was no lateral movement. Both fighters were stationary targets and easy to hit. They did not step in with their punches but kept charging towards each other like two rams butting heads. When they closed and became entangled it was obvious that no one had taught them how to clinch. There were very few combinations thrown. They just mostly flailed away with “hail Mary” punches intended to knock out their opponent. When one landed it was usually by accident. 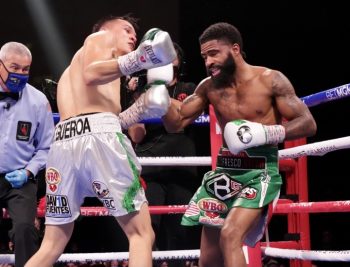 Neither fighter displayed any coherent plan or strategy. As a result, the fight quickly deteriorated into a messy and artless brawl with every round looking exactly like the one that preceded it. If you saw one round you saw the entire fight. There was no change in tactics or adjustment in style because neither boxer was capable of doing that. The only intelligent comment made by one of the five incessantly yammering ringside commentators was that “they’re fighting like ‘rock ‘em, sock ‘em robots’”.  No doubt it was meant as a compliment, but is an apt description of boxers devoid of any cleverness or what used to be referred to as “ring guile”. As is often the case with today’s boxers they were getting hit far too often with punches that could have been easily avoided. Defensive moves in the form of parrying, ducking, sliding, slipping, weaving or simply taking a step back were nonexistent. According to CompuBox punch stats they threw a combined total of 1462 power punches (described as any punch not a jab) of which over two-thirds landed—far too many. Yet only 354 jabs were attempted, with barely 10% landing. If either fighter had employed an effective jab more often it could have changed the course of the fight.

“The disappearance of the left jab is one of the more disturbing aspects of the dumbed down quality of contemporary boxing.”

Just as a comparison I watched a video of the Rueben Olivares vs. Alexis Arguello featherweight title bout from 1974 and counted up the number of jabs thrown by Olivares, one of the greatest punchers of the past half century. I stopped counting by the sixth round since Olivares had already thrown 216 jabs, 50 more than Fulton had attempted for the entire 12 rounds. The disappearance of the left jab is one of the more disturbing aspects of the dumbed down quality of contemporary boxing.

If there is anything positive to say about this fight it is that both men were evenly matched. In the end Fulton was awarded a majority decision and thus unified the WBC and WBO super bantamweight titles. But don’t open the champagne bottles just yet. We should not confuse a “unification” fight with a fight for the “undisputed” title. The current IBF (International Boxing Federation) super bantamweight champion is Murodjon (let’s call him Muro) Akhmadaliev of Uzbekistan. In addition to the IBF title Muro also owns the WBA “Super World Super Bantamweight” title. No, that is not a typo. The word “Super” appears twice to differentiate it from the plain “Super” WBA title which appears to be vacant at this time. Adding another version of the same 122 pound title gives the WBA an opportunity to charge another “sanctioning fee” when the time comes to crown the next “super, super” world champion. What this means is that the WBA recognizes not one, but two versions of their same 122 pound world title. It is a clever subterfuge. More titles mean additional fees can be deducted from the boxer’s purse for the “privilege” of fighting for an organization’s title belt.  All four sanctioning groups are guilty of the same behavior. It’s why this farcical but dangerous sport currently has about 90 world champions (no one is sure of the exact number) spread over 18 weight divisions, at least 7 of which are unnecessary. Over the past 40 years millions of dollars in sanctioning fees have flowed into the coffers of the WBC, WBA, IBF and WBO with nothing of value being returned to the sport. One can never underestimate the arrogance and crass stupidity of these useless boxing parasites who continue to feed off of the blood, sweat and tears of the boxers they exploit.

Mike Silver’s books include “The Arc of Boxing: The Rise and Decline of the Sweet Science” and “Stars in the Ring: Jewish Champions in the Golden Age of Boxing-A Photographic History”; His most recent book is “The Night the Referee Hit Back: Memorable Moments From the World of Boxing”.