The Professional, A Novel. W.C. Heinz. 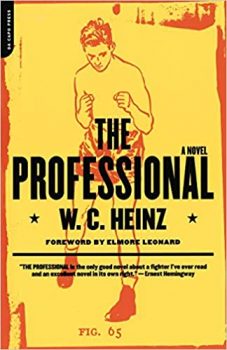 Six-plus decades after its publication, W. C. Heinz’s novel “The Professional,” about a young middleweight boxer preparing for his first championship fight, has reached classic status, that is, a standard for a book about boxing, and a model for the art of writing itself.

The young man, Eddie Brown, and his aged manager, Doc Carroll, are reaching for the dream in boxing, a championship. The novel covers the month in training camp before the big fight. Boxer and manager are facing the riskiest moment in their careers, decided in one hour on a Friday night at Madison Square Garden. They won’t get another chance.

To Frank Hughes, the sports writer covering the training and the fight, this is the “Moment of Truth.” At this point in a bull fight, fighters face the bull, drop the cape, and rush forward with a sword. They are committed to victory or goring. Classics are often about courage. In “The Professional,” to behave with courage may be more important than winning or losing.

How the boxer, manager, and trainers prepare and withstand the challenges to their big fight is the center of the story. The novel, set in the 1950s, offers a glimpse into boxing at its peak, the so-called Golden Age of the sport before its decline.

If he hadn’t done this novel, Heinz had achieved enough success as a writer to be remembered. First and foremost, he was a newspaper man, a journalist. His sports writing has been anthologized. His biography of football legend Vince Lombardi went through 15 printings. Heinz’s second novel was the basis for the hit movie MASH, and later a popular TV series.

Journalists find his column “Death of a Racehorse” a model for a restrained, powerful elegiac to a race horse, injured and euthanatized. The brevity and eloquence of the column, some say, compare favorably with Lincoln’s Gettysburg Address.

Elmore Leonard, who wrote a forward to the novel, credits Heinz as his major influence. Heinz’s prose has been praised by the dean of boxing writing, A. J. Liebling and his fiction by Ernest Hemingway. Like the reporter Frank Hughes, Heinz felt a special connection to the ring and the practitioners of the sweet science, Liebling’s classic description of boxing.

As for Hemingway, who praised “The Professional” as the best novel about boxing and the best first novel by anyone, the two men were colleagues and friends. In World War II, they were correspondents with American forces fighting in Europe. In the last days of the war, they shared a house in Germany.  Hem, as Heinz called him, and Heinz wrote their dispatches from there for American magazines, like Collier’s. Hemingway even borrowed Heinz’s portable typewriter to write one.

Close as they were, Heinz did not learn his writing style from Hemingway.

Close as they were, Heinz did not learn his writing style from Hemingway. They both trained as journalists to report the facts, restraining biases, to show readers what they didn’t have access or ability to see, to decide for themselves. Hence, their style of writing is crisp, where what people say and do count, and less what people think, unless it emerges as speech or action.

For example, before the fight, Brown is interviewed on television by a woman talk show host. Doc Carroll at first resists the interview, not trusting the media, but gives in. The outcome for him is one of the few adjectives, “dreadful.” Heinz’s scene is just the facts, but they show character, Brown’s naivete and the host’s nastiness.

“Now, Eddie Brown, you’re married, aren’t you?”
“That’s right.”
“Do you have any children?”
“We have a boy.”
“How old is he?”
“Five.”
“Do you want him to become a fighter?”
(Eddie explains that his epileptic son cannot do contact sports. The TV woman overstates her condolences to get to her real bias: she doesn’t like boxing or boxers.)
“I am sorry to learn that. I truly am, and I’m sure we all are.”
“Thank you. He’ll be allright.”
“But if he were perfectly healthy, would you want him to be a fighter?”
“That’s hard to say.”
“Is it hard to say? Don’t you really mean that you have your doubts, and having them, you wouldn’t want your son to be a fighter. Is that right?”

In the novel, television in the 1950s is an inevitable force in American life, but not positive for boxing. A person does not have to be a Luddite to see that a technological advance brings unintended outcomes – witness the cell phone.

According to Doc Carroll, television changes the fight game. He laments that fans now stay in their living rooms to watch a fight rather than lining up at Madison Square Garden.

According to Doc Carroll, television changes the fight game. He laments that fans now stay in their living rooms to watch a fight rather than lining up at Madison Square Garden. In addition, fans used to attend local venues, like at community centers, to watch local amateurs, who learned boxing from local fight clubs. Now fans can watch bouts with talent from all over the country without leaving home or a local bar. Eddie Brown started his boxing career locally with Golden Gloves. Where would new talent come from to be nurtured, trained, and in Doc’s case, managed?

Unstated but likely too, what would happen to Frank Hughes’s career? He’s a sports writer, in dozens of newspapers with eight million readers. Television will take audiences away from print media. In one study, newspaper subscriptions are only 30% of the what they were in 1950.

Regardless of these concerns, the novel celebrates high achievement. Beyond ability, dedication is the first requirement for the professional. Eddie Brown’s life for nine years and ninety fights has been focused on mastering his sport.

But Doc knows, there’s more to the professional than dedication and experience. Control over the body, sharpening the conditioning and reflexes, improving strength and eliminating weakness, these are all essential, but not complete. Brown is the Pro because of one more virtue.

The professional controls emotion.  Boxing, as champion Benny Leonard said, is a game of chess; not brain over brawn, but brain in charge of brawn. “Excitement is for amateurs,” says Doc. The professional learns “to control excitement without killing it.” So, too, a writer like Heinz has learned to control and focus emotion, harnessing his feelings behind solid sentences, without flair or fanfare.

Dedication. Restraint. Control. These make the professional fighter or a writer or any person. Sports are a theater for the human condition. Boxing for Heinz is the main event.

Chris Jones, a young writer for Esquire magazine, says, “With Bill Heinz in my corner, always, I inched forward in the writing game.”