The Night The Referee Hit Back:

Memorable Moments From The World Of Boxing

Review: The Night The Referee Hit Back 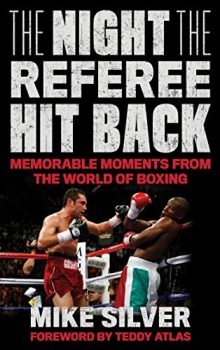 Mike Silver has been deeply involved with boxing for well over half a century. He started as a kid training in the legendary Stillman’s Gym, served on the New York State Boxing Commission, and even took a crack at promoting fights. Where he has left an indelible mark is with his writing about the sport. His book The Arc Of Boxing: The Rise And Decline Of The Sweet Science is the finest book ever written on how the fine art of boxing has regressed to something that is all but unrecognizable today.

He followed that up with Stars In The Ring: Jewish Champions In The Golden Age Of Boxing: A Photographic History, a detailed look back on the history of Jewish fighters that includes the period when boxing was very much a Jewish sport.

Mike has also penned hundreds of interesting and at times controversial articles for many boxing publications and web sites (Note: Mike Silver is a frequent contributor to Boxing Over Broadway).

In his latest book, The Night The Referee Hit Back, Mr. Silver brings us a selection of those essays along with a number of interviews with some of the last of the old school boxers. Thumbing through the pages of this volume is like getting an advance degree in boxing theory. Mike brings you back to the days of the real boxing gyms in his opening piece, Boxing In Olde New York: Unforgettable Stillman’s Gym. He not only knows the history of this iconic establishment, he was actually there when it was in full swing. You can smell the cigar smoke and hear the tattooing on the speed bags. With his pen (or keyboard) Mike paints a word picture that if it were in a frame would be a George Bellows lithograph.

Mike Silver is not one to shy away from controversy and he holds strong opinions. You may not always agree with him, in fact he may get your blood pressure to rise, but you cannot fault him for not putting forth very strong arguments in defense of his positions.

Among the articles that have raised a few eyebrows is The Myth Of The Thrilla In Manilla. Mike is not afraid to go against the conventional wisdom that this was an all-time great fight, and rather makes the point that if this was a fight between two guys named Smith and Jones instead of Ali and Frazier it would have been seen as what it really was; a good brawl between two shot and over the hill fighters. He makes plenty of other arguments in defense of his opinion but I will leave those for the readers to explore on their own. Agree or disagree, you will be fascinated by what he has to say.

Three essays hold significant historical importance; Don’t Blame Ruby: A Boxing Tragedy Revisited, where the author looks at the third Emile Griffith vs Benny Kid Paret fight and what the true cause of Paret’s death was. A lot more went on here than is generally believed, and Ruby Goldstein was falsely scapegoated by those who were looking for easy answers.

Reading this piece is like looking at a deposition for a trial, and I can tell you, Mike would have been a very convincing expert witness for the prosecution.

In Foul Play In Philly, Mike makes a connection between what happened the night Rocky Marciano won the title from Jersey Joe Walcott and the evening in Miami when Cassius Clay defeated Sonny Liston. Similar shenanigans went on in the corners of both champions  on each occasion. Was there a connection?  Reading this piece is like looking at a deposition for a trial, and I can tell you, Mike would have been a very convincing expert witness for the prosecution.

The third historically significant article is Ali vs Shavers: The Morning After. In many ways this is a sad one to read as in it Mike lays out facts of just how many terrible head shots Ali took from Shavers that night. If Muhammad wasn’t already damaged enough to ensure he would suffer from CTE a few years later, this all but certainly sealed his fate.

There are many more gems in this collection that include stories about people as varied as Teddy Roosevelt, Woody Allen, a kangaroo, and Marlon Brando. All make for an enjoyable journey through the sport of boxing.

As great as the essays are, Mike really shifts into high gear with his interviews of boxers of the past. Not only does this selection include great fighters, but also boxers who are deep thinkers about the profession. The five he spoke with were active in the period from the 1930s to the 1970s, a huge part of the Golden Age of Boxing. What makes these conversations even more enlightening is the fact that Mike Silver knows what questions to ask. These aren’t just simple question and answer sessions but rather more along the lines of a Brian Lamb interview in that Mike knows how to prod the fighters into opening up about their thoughts on what it took to be a skilled fighter and how they viewed some of their toughest opponents.

The fighters Mike spoke to were Archie Moore, Carlos Ortiz, Tiger Ted Lowry, Curtis Cokes, and Emile Griffith. The insights contained in these conversations are priceless. Ted Lowry talks about his controversial loss in his first fight with Rocky Marciano, his exhibition match with Joe Louis, and what it was like being a black soldier in the segregated military during World War Two.

Archie Moore describes what it was like to fight Charley Burley, “He was like a threshing machine going back and forth.” and the importance of practicing moves in front of a mirror. Moore also gives a list of the ingredients that go into being a successful fighter. When Mike asks the secret to Archie’s boxing longevity, the Old Mongoose responds, ” Well, I knew how to fight.” He has much more to say about the subject, and every word is fascinating.

Reading his discussions with Carlos Ortiz and Curtis Cokes is like sitting in on a master class on the Art Of Boxing. These men are geniuses when it comes to describing the sport they excelled in. The subtleties they talk about show just how much thought went into becoming a good boxer. A couple of examples:

Carlos Ortiz on advice to a young fighter, “Boxing is to hit and not get hit. And if you go into the ring with that thought in mind you’ll be OK. But don’t go out there to impress the public by showing them how much you can take or how hard a punch you can take. That’s not the case in boxing. Boxing is I hit you, you don’t hit me, over and over again. It’s a skill that you apply.”

Curtis Cokes on footwork, “I think today’s fighters forget about footwork. I worked everyday on my footwork, turning left and right, backing up, going forward. I turned to my left to be outside of my opponent’s right hand, and then I’d swing to my right to be outside of his left jab. Learning how to box is a slow process but you try to learn something everyday.”

These comments are much like Shakespeare’s advice to actors in Hamlet, when speaking through the Dane, in just a couple of paragraphs he gives the basics of acting. That is what is contained in Curtis and Carlos’s advice to boxers. It is pure gold, and there is much more of it in these interviews.

Emile Griffith’s remarks on his fights with Joey Archer will make you smile. He tells Mike it was fun, “The reason I say it was fun fighting Joey Archer is because we were like two boxers trying to outsmart each other. He’s doing something to me this round and I come back the next round and I do the same things back to him. It was like a chess game. But Joey was a very good young man.” In those few lines you see the intricacies of the art of boxing along with the respect fighters had for each other.

Griffith’s comments on his fights with Monzon are also interesting. Most people don’t remember it, but in their second fight most people felt that Griffith deserved the decision. Emile also talks about how he couldn’t deal with the “extra step” he had to contend with when fighting Jose Napoles. There is so much more, the fights with Paret, Rodriguez, Tiger, Benvenuti and many others.

When you read these interviews it is more than just words on a page, you feel you are sitting in on the conversations as the voices come to life. Mike’s knowledge and insight is unparalleled. He brings you back to the days of great writers such as Bob Edgren and Jimmy Cannon.

It is no secret that I am partial to the work of Mike Silver, but that is because he is very, very good at what he does. I am a tough critic when it comes to “boxing experts” of which there are many self-proclaimed but very few who rise above mediocrity today. Mike knows boxing, it flows through his veins. He has a keen eye and a lifetime of experience. If you want an education in the Art of Boxing, Mike Silver is the man to read. You may get riled at some of what he writes, and whether or not he changes your mind on certain aspects of the sport, he will make you think more deeply about your views.

You will also find yourself deeply entertained by many of the essays, especially the title piece. And yes, the referee did hit back.

The Night the Referee Hit Back can be ordered from Amazon.com
Or from the publisher: http://Rowman.com