Cleveland’s Mr. Boxing
Looks Back At His Favorite Fights 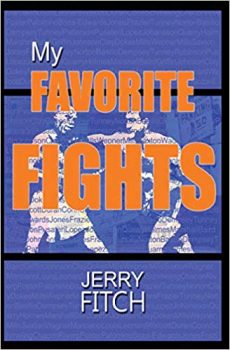 Every fight fan has his favorite fights. Some are those that were seen live either in person on on television. Others have been viewed on film and usually include classics such as Ali v Frazier I and Louis v Schmeling II. But those would be included on any list of “great” fights.

In Jerry Fitch’s latest book, he does not compile another list of the greatest fights. What he does is to look back at a lifetime, over 50 years of watching fights, and chooses his “favorite” fights. Yes, some of his favorites are also some of the great fights of all time, but there are many included in this collection that became favorites for other reasons. It is that difference that makes this book so enjoyable. In fact, after reading it I started to look back at my own history of watching fights and recalled how many fights I saw on the local level that would rank on my list of favorites.

In 25 chapters, Jerry describes the fights he fondly remembers and gives his reasons for why they stand out in his memory. Living in Cleveland, he had the good fortune to be in a place that had an active boxing scene over the years. He has written a book on the history of Cleveland boxing as well as biographies of two great fighters from that city, Johnny Risko and Jimmy Bivins. Jerry has earned the title “Cleveland’s Mr.Boxing”.

His list does have some of the all time great fights on it. He has chapters on Ali vs Frazier I, the first Leonard/Duran fight, the first Louis/Conn fight, and the fight where Rocky Marciano won the title from Jersey Joe Walcott. His take on these fights is very interesting, and there is no doubting Jerry is an “old school” boxing guy.

While reading his views on experiencing these well known battles is a treat, the book gets really interesting when Jerry writes about some of the lesser known matches between figures that never made to the top. Or fights that would never be considered great, but certainly are interesting. He has a fine eye for picking out the matches.

One favorite of mine, for obvious reasons, is the first fight between the exciting Akron, Ohio middleweight Doyle Baird and Boston favorite Iron Mike Pusateri, held in Cleveland in 1971. Baird had established himself as a world class fighter having fought a draw with champion Nino Benvenuti in a non title fight, scoring a win over Don Fullmer, and going ten rounds with Emile Griffith while losing a decsion. As any Boston boxing fan from that era will tell, Iron Mike Pusateri was one tough battler.

Jerry’s descriiption of the fight is terrific, but he also gets into some of the background of the promotion as well as telling a funny story about a fan he was seated next to. It’s all part of the charm of this book.

Another reason for choosing a fight as his favorite has to do with his personal boxing history. Most real fight fans will remember the first pro boxing match they ever attended. In Jerry’s case it was the third fight between Carmen Basilio and Johnny Saxton which was held in Cleveland. This welterweight title fight was the rubber match between the two combatants, and Jerry admit it was anti-climatic, but it was very exciting to have his first live boxing experience be a championship fight.

Some of the other fights discussed in the book are the 2nd bout between local fighters Billy Wagner and John Griffin, Cassius Clay vs Doug Jones, Danny Lopez and Bobby Chacon, Ali vs Wepner, and Palomino vs Muniz I.
There is even a very interesting chapter on a fight card Jerry attended in Palm Springs, CA where the main event had to be delayed because the ring was swarmed by grasshoppers.

This is Jerry’s fifth book, and he is to be credited with doing much to keep alive the memory of the great history of boxing. In choosing to include a number of local fight cards in this collection he has seen to it that the guys who never made it big are still remembered for the wonderful fights they put on before smaller crowds. Some of these fight cards were more exciting than many of the big pay per view fights that fans laid out big money to see.

After reading Jerry’s book I hope you too will think back on those fights you saw at the local arenas, and come to appreciate how hard those fighters fought for the short money. While Boston boxing fans have never witnessed an infestation of grasshoppers before a main event, I am sure you will have many of your own stories to tell about nights at ringside. Jerry Fitch shows us just how interesting so many of those memories are.

To order a copy of My Favorite Fights, email Jerry Fitch at jerryfitch1946 [at] gmail [dot] com