From September 9 to October 8, 2016, SpeakEasy Stage Company will proudly present SIGNIFICANT OTHER, a sharply observed new comedy about the challenges of finding love and letting go, written by Bad Jews playwright Joshua Harmon. 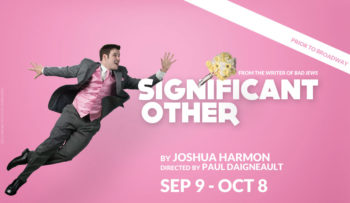 Slated to begin previews on Broadway in February, 2017, SIGNIFICANT OTHER tells the story of Jordan Berman, a 29 year old single gay man whose life up until now has revolved around BFF’s Kiki, Laura, and Vanessa. But as singles nights suddenly turn into bachelorette parties, Jordan starts to worry about his romantic prospects, and sets out on a journey to find his own Mr. Right.

SIGNIFICANT OTHER is the latest from playwright Joshua Harmon, whose play Bad Jews was the third most-produced play in the United States during the 14-15 theatre season. A recent graduate of Julliard, Mr. Harmon has received fellowships from MacDowell, Atlantic Center for the Arts, SPACE at Ryder Farm, and the Eudora Welty Foundation.  He is currently at work on commissions for Roundabout Theatre Company, Lincoln Center Theater, and Manhattan Theatre Club.

SpeakEasy Founder and Producing Artistic Director Paul Daigneault will direct this New England premiere production of SIGNIFICANT OTHER. Mr. Daigneault’s recent SpeakEasy directing credits include the acclaimed productions of Violet, Mothers & Sons, Big Fish, The Color Purple, In the Heights, and Next to Normal. Mr. Daigneault is the recipient of three Elliot Norton Awards, including the 2014 Norton Award for Sustained Excellence.

SIGNIFICANT OTHER will run for five weeks, from September 9 through October 8, in the Roberts Studio Theatre in the Stanford Calderwood Pavilion at the Boston Center for the Arts, 527 Tremont Street in Boston’s South End.

Ticket prices start at $25, with discounts for students, seniors, and persons age 25 and under.
For tickets or more information, the public is invited to call the box office at 617.933.8600 or visit www.SpeakEasyStage.com .