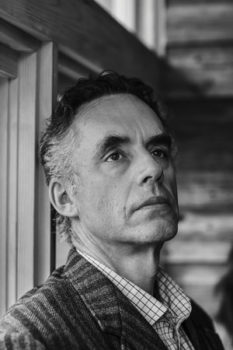 Tuesday night, May 22 at the Shubert Theater in Boston the monster spoke. Dr. Jordan Peterson the Canadian clinical psychologist, author, professor and newly minted YouTube and media sensation gave a two hour (a one-and-a-half-hour lecture followed by a half hour q&a) presentation expounding on the themes of his internationally bestselling book, 12 Rules For Life, An Antidote To Chaos. Dr. Peterson’s emergence as a public intellectual with a growing following has been met by howls of protest and derision including accusations of his being a Nazi, homophobe, misogynist, anti-Semite and the leader of a cult of neocavemen.

Tuesday night, the monster himself took the stage at the Shubert to a capacity house of, if his critics are to be believed, exclusively male, knuckle-dragging troglodytes. The first shock of the evening came when it turned out that in reality his audience consisted of casually dressed, polite (predominantly but not exclusively) men; but women were certainly there in abundance as well. The evening’s second shock came when Dave Rubin walked onstage to warm up the audience and introduce the monster. Rubin is a former liberal, a Jewish comedian, and host of the increasingly popular podcast The Rubin Report. He is also a happily married gay man. His introduction of Peterson was funny, warm and admiring.

Then came the main event. The monster walked out onto a stage bare but for a stool holding bottles of water. He was thin, of average height, wore a gray suit and tan shoes (loafers?). When he began to speak his voice was mild. His mannerisms were restrained. He presented as the antithesis of the fire-breathing hate monger that much of the press has portrayed. Over the next two hours he covered a wide-ranging territory that included some personal history, (He grew up in a small, rather bleak town in Alberta, Canada. The closest big city was Edmonton, five hundred miles distant.) much discussion of his intellectual heroes Carl Jung and Alexander Solzhenitsyn, his distaste of deconstructionist philosopher Jacques Derrida, and his fascination with both biological and social hierarchies. Apparently, his audience of devolved knuckle-draggers had come out to hear a lecture about ideas.

And he was an explosion of ideas. His manner of speaking was professorial without being didactic.

And he was an explosion of ideas. His manner of speaking was professorial without being didactic. He gave the impression of a man who isn’t just teaching: he paused often as he seemed to be carefully considering what he would say next, checking it in his mind for consistency, veracity and value. Its an unusual style that has the effect of making his audience feel as if they are discovering ideas with him, as if they are part of his process. And he readily admits that he doesn’t have all the answers but is sincerely interested in finding them.

At times he was personal and emotional, choking up a bit in remembering his mother-in-law’s difficult passing. At other times he was amusing as when he talked about the need rats have for physical nurturing. He also addressed some of the criticism he has gotten from the media including his now infamous TV interview with British journalist Cathy Newman, in which prior to the TV cameras coming on she was polite, charming and sympathetic and then completely changed her demeanor when the cameras were  turned on. He also addressed another recent controversy in which a phrase, “enforced monogamy”, has been used to delegitimatize him. His explanation of his actual meaning was dealt with in the post-speech q&a which can be seen in the link below:

If there was any one issue that propelled him into the spotlight it was his stance on a piece of Canadian legislation, Bill C-16 which stipulates that people must address transgendered or other “non-binary” people by a pronoun of their choosing. To fail to do so can lead to governmental sanctions. Peterson took to YouTube to voice his objection to the idea of compulsory speech which he vociferously contends is a violation of the principle of free speech. Suddenly he went viral. 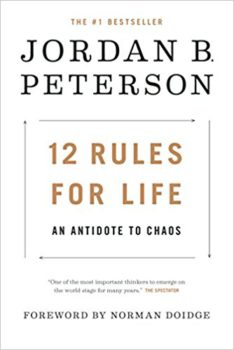 Much of what Peterson has to say is his extrapolation of what are the consequences of the hierarchical structure of society, itself embedded in the biological foundations of humanity. His analysis considers the stories of ancient heroes and stories of how man succeeds and fails. This leads him to Christianity which relies on the primacy of the individual. This he contrasts with the collective, which history shows invariably leads to tribalism and the segmentation of society into separate interest groups. And it is here that we can see the genesis of the Left’s hatred of Peterson. By his reckoning history is rife with the failures of collectivism, including the horrors of Nazism, socialism and communism. And he sees the current growth of intersectionality, the collision of differing groups invariably leading to the strong marginalizing the weak, bringing about group conflict, with groups of the privileged victimizing the groups of the less powerful.

And it is Peterson’s utter rejection of collectivism as anathema to the flourishing of the human spirit that makes him such a target for the Left.

And it is Peterson’s utter rejection of collectivism as anathema to the flourishing of the human spirit that makes him such a target for the Left. If people once again start to believe in the primacy of the individual, the individual with a sense of meaning, then the Left’s entire narrative crumbles and blows away like dust. This is why they see him as such a danger, as such a monster. To watch the cheer that rose up from the audience when Peterson pointed to the necessity of their taking responsibility for their own actions would be enough to drive the Left to the paroxysms of hate that they have directed at Peterson.

So the monster concluded with a call to people to live up to their “true nature” by accepting personal responsibility for their lives, and taking up… “an ethic of fair play and courage” which “…keeps us a good distance away from Hell.”

By the conversations that could be heard when Dr. Peterson had concluded his presentation the now obviously non-troglodytic audience left inspired to shoulder heavier burdens of responsibility in order to dedicate themselves to a higher purpose.

At this point it became impossible to view the humble academic whose words had just held our attention for two hours as having any of the characteristics of a monster. If a monster had been expected to show up on the Shubert stage that night, he never appeared. In fact he seems never to have existed at all.