A note of thanks to the daughter of Teddy Atlas for convincing her father to get back to doing what he does best—teaching boxers the (lost) art of boxing. Seven weeks ago Atlas took over the training of Timothy Bradley and the results were nothing short of phenomenal. Bradley said it best in a pre-fight interview; “I finally have a real trainer”. Indeed! Bradley’s ninth round stoppage of Brandon Rios this past Saturday night had “old school” written all over it, complements of “old school” trainer Teddy Atlas. Bradley also stated that Atlas’s schooling taught him more about technique and strategy than ever before. Good for him—and good for boxing. 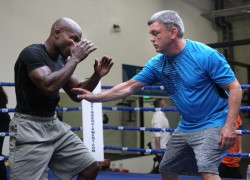 Atlas’s job was not easy. He had a willing student in Bradley but also a fighter who had been worn out in fights where the strategy was simply to outwork the opponent. Bradley had also made the mistake in the past of exercising with heavy weights to increase his strength and punching power. Of course this misguided approach did just the opposite by making him muscle bound and robbing him of his punching power. Bradley’s overdeveloped pecs and lats are very impressive if he was entered into a body building contest but he can barely dent an egg with his feather like punches. Nevertheless, Atlas recognized a desire by Bradley to do whatever was necessary to turn his boxing career around and was willing to work with him and achieve the desired results.

Trainers take note: Watch the tape of the Bradley vs. Rios fight over and over, including especially the instruction given to Bradley between rounds. What a delight to watch a boxer actually attempt to think and avoid punishment by using tried and true methods of the type that had been effective for almost a century but are virtually forgotten today.

Rios could have tried to counter Bradley’s hit and move strategy but he simply had no answers—and neither did his clueless corner men. Rios kept coming straight ahead and made no attempt at all to cut off the ring, or duck Bradley’s counter punches, or throw more jabs in an attempt to disrupt his rhythm. The pitiful instructions (or lack thereof) he received was typical. In between rounds the microphone picked up Rios’s trainers telling him to “throw more punches…throw faster punches” and of course the oft heard expletive laced “what the f…k are you waiting for!….c’mon go for it!” That’s it. No strategic advice was given at any time. Not even at the basest level. Why are such people even allowed into the corner? Why isn’t there some sort of licensing procedure to make sure trainers have at least a minimum of boxing knowledge. It is so disheartening to see how dumbed down this sport has become.

Compare the above to a sampling of Atlas’s instructions to Bradley between rounds: “Control the outside and don’t stay in one place too long…use your jab and move to your left and then move to the right and set something up…catch him as he comes in and don’t drop your hands…move off to the side after landing your jab..” Atlas kept reminding Bradley to “control the geography of the ring” (meaning use footwork). Obviously these basic boxing moves had been practiced over and over throughout their training sessions. Another move involved Bradley stepping to his left after landing a jab and quickly landing a left uppercut to Rios’s midsection. His incessant body punching eventually brought Rios to his knees in the ninth round and he was counted out. (If Bradley had more power this fight would have ended much earlier). It is worth noting that over 50% of Bradley’s punches were aimed at Rios’s mid-section. This was a common practice among the top fighters of decades past but is virtually unheard of today.

Over the past 20 years, for a variety of reasons, (see the author’s book “The Arc of Boxing” for a full explanation) boxing technique has fallen to its lowest level in over 100 years. Defense has become a lost art along with so much else that is missing at virtually every level. That is why Bradley’s new evasive style, mobile footwork, body punches and his effective and intelligent use of the left jab was like a dose of fresh air—at least to those who can recognize such things.
Perhaps I am being overly optimistic, but are we seeing a trend developing here? Last month we saw two rare demonstrations of some old school boxing skills. First flyweight champion Roman “Chocolatito” Gonzalez gave a wonderful display of effective aggression while chalking up his 44th straight victory. On the same night Gennady Golovkin, the true middleweight champion, showed how effective a left jab can be when used properly to set up power punches and eventually wear down a tough and determined opponent. (see article on this site: “Stop The Presses! Boxer Wins Fight Using Left Jab!”

Years ago these talented boxers would be considered excellent prospects because they would be competing in a much tougher environment, but today their use of solid but basic boxing techniques makes them stand head and shoulders above a very mediocre field of contenders.
Let’s hope that other boxers and trainers begin to understand that boxing is an art—the art of self-defense. This will not only result in more interesting matches but will make a dangerous sport safer. Two boxers moving toward each other like two trucks in a mindless demolition derby is not boxing.

Mike Silver is the author of “The Arc of Boxing: The Rise and Decline of the Sweet Science” (2014, paperback, McFarland Publishers).