“I have anchored here,” John L. Sullivan said, speaking of Donelee Ross farm in Abington, Massachusetts, “until my time comes. There is no place like home.” It was at Donelee Ross that he died 100 years ago today, February 2, 1918, of heart failure at the age of 59. Surprisingly for a man whose exploits had often led the news, Sullivan’s passing did not make the front page of the New York Times, dominated by coverage of the war in Europe, in which American soldiers, shipping out across the Atlantic in ever-growing numbers, would soon start fighting. The country that Sullivan helped define—the America of the Gilded Age, what some called the Age of Confidence—already seemed quaint and far away, its outlines receding into history. Sullivan died a nineteenth-century man at his pastoral home, far from the mechanized clamor of a nation always impatient to race into the future.

“It is a dollar to a nickel that he is known to more people in this country than George Washington,” the Police Gazette had written of Sullivan as late as 1905. But like almost all heroes, his memory began to fade as the years passed.

By the time I encountered Sullivan in the 1970s, browsing books on boxing at my local library, he may as well have lived in Roman times. Younger generations see a great, lauded figure from the past, and they think to the present for reference. My point of comparison back then was Muhammad Ali, the only champion I’d yet known. Ali was then in his second reign as heavyweight champion and generally regarded as the most-recognized face on the planet. He was a hard man to compete with, even for his contemporaries; all the more so for those dim figures in boxing histories, who fought only in photos, not on film. They looked frozen in antiquity by comparison, their fighting stances ponderous, their bodies less defined. They wore tights. It was as if the history of boxing mimicked the timeline of the evolution of man, a slow accretion from crawling to walking, left to right, across a foldout page. Ali stood, arms raised, at the far right. Sullivan, barely off all fours, occupied the space on the far left. Or so it seemed to my young mind then. 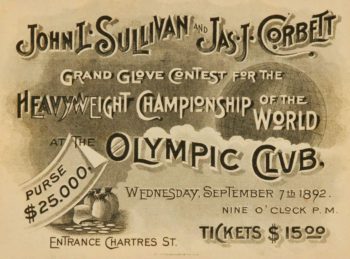 It would be some time before I could understand Sullivan and his world and come to appreciate his fighting accomplishments and the trajectory of his remarkable life. He was champion for ten years, from 1882 to 1892, and he lost only one match, his last, to Jim Corbett, in New Orleans, losing the heavyweight championship along with it. They fought into the 21st round, and Sullivan took a relentless battering for over an hour before finally succumbing. His greatest victory was a 75-round marathon bout against Jake Kilrain in 1889, waged with bare fists under the old London Prize Ring rules, in 100-degree Mississippi heat. That battle lasted more than two hours and took on mythic qualities almost the moment that it was over—with fans gathering up sod, pieces of ring posts, and any other sacred relic that they could find. Sullivan vs. Kilrain stands alone in the history of boxing, a real-life myth. Nothing else compares with it.

Sullivan’s idea was that his possession of the heavyweight title made him an important person, a kind of king.

Certain people have ideas about themselves, and when they live out these ideas, they create new realities. Sullivan’s idea was that his possession of the heavyweight title made him an important person, a kind of king. There was no precedent for thinking so. There had been heavyweight champions before him. They were small-time figures, toiling in an illegal sport for modest payouts, and usually slipping into obscurity (and poverty) when their fighting days were over. None were known widely to the general public or written about with such fevered interest. When Sullivan won the title in 1882, prizefighting, as it was then largely known, was illegal in every state, and the efforts that went into making and staging matches were sometimes as dramatic as the matches themselves. When Sullivan left the ring, the sport remained broadly illegal, but his matches had been covered nationally and internationally; he had been to the White House; he had been the subject of literature, song, and art; he had made “the heavyweight championship of the world” (though he was not recognized overseas) into a compelling—and commercial—prize; and he had identified that title with America itself. 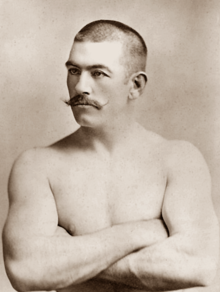 “There isn’t a self-respecting American,” he said, “no matter what tomfool ideas he may have about boxing in general, who does not feel patriotic pride at the thought that a native born American, a countryman of his, can lick any man on the face of the earth.” Where a void had been, Sullivan left behind a world. Alas, that world included the infamous color line, which Sullivan took it upon himself to draw against black fighters, shutting them out of a chance at the title. (It would take Jack Johnson to breach the line and Joe Louis to eradicate it.)

Even as a kid, ignorantly dismissive of him as a fighter, I was struck by Sullivan as a character. His story leapt off those musty library pages. He did everything on a grand scale: traveling, boasting, eating, drinking (especially drinking), and spending. He estimated later in life that he had earned about $1 million and squandered all of it. His famous boast, “I can lick any sonofabitch alive!” became an archetypal fighting man’s motto. It lingers today, as does “Shake the hand that shook the hand of the Great John L.!” a line that originated in a vaudeville song and became emblematic of the adulation so many Americans, especially men, had for him.

When I was working on The Boxing Kings, one of my brothers asked me where the book would begin. With John L. Sullivan, I said. Many years had passed since that name had come up in conversation between us. My brother thought for a moment and then, as if pulling the phrase from the mists, said: “Let me shake the hand that shook the hand of John L.—that’s him, right?” That’s him. 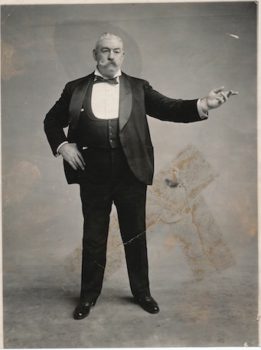 In 1905, the 47-year-old Sullivan was 13 years past his championship years and well into a second career as a touring stage personality—but he was also deeply mired in the alcoholism that scarred so much of his life: it had wrecked a marriage and several friendships, got him into scrapes with the law, cost him half a million dollars by his own estimation, nearly killed him more than once, and left behind him a long trail of terrible behavior. Now, sitting in a hotel bar in Terre Haute, Indiana, Sullivan drained a glass of champagne (ale, in other accounts) into a cuspidor and vowed never again to take another drink—and never did, amazing his friends and more importantly, laying the foundation for a new life. He became a temperance lecturer. A few years later, he married a childhood friend, Kate Harkins, and they settled on their humble estate, Donelee Ross— its name an amalgamation of their Irish ancestral origins—and farmed, among other things, potatoes. After Kate died in 1916, Sullivan took in an orphan boy, William Kelly, and at the time of his death seemed to be preparing to adopt him. By all accounts, he doted on the boy, who was left parent-less, again, by his passing. Sullivan was also adored by the children of Abingdon, whom he regaled with stories while letting them play on the farm. He gave generously to charity. Thus Sullivan, who had been as notorious as he was famous during his fighting days, died a cherished old lion, revered in a way not unlike Ebenezer Scrooge after his ghostly visitations. “I have seen it all,” he said, and he had—and perhaps had attained some measure of redemption, too.

The arc of Sullivan’s life and career would be recreated by some of his heavyweight successors, in addition to becoming a kind of celebrity template: rise, fall, rebirth. But for all its familiarity, the model has a timeless lesson: one is never counted out unless he counts himself out. A century after Sullivan poured out that last glass of booze, Mike Tyson began traveling a redemptive path of his own. The stages of his life and career had resembled Sullivan’s: spectacular, iconic success; decline, fall, and descent into caricature; reclamation. Like Sullivan, Tyson left much wreckage behind him and had battled the demon of substance abuse; like Sullivan, he found an anchor in a later marriage; and like Sullivan, he wound up on stage, giving his testimony. Not everyone buys this reformed Tyson, but few would describe him as the same man who served a three-year prison term for rape or bit off part of Evander Holyfield’s ear.

All the heavyweight champions had to start over in some form or another when their fighting days were done. Some of their transformations, like George Foreman’s, or, more somberly, Muhammad Ali’s, were dramatic, others more ordinary. The courses they took illustrated in different ways that the qualities that make champions—determination, will, and the capacity to envision something that others may not see—can be applied outside the ring as well, for more enduring purposes. 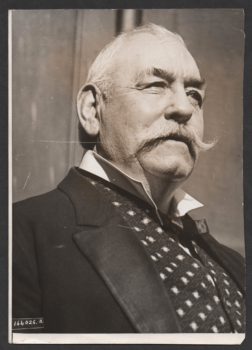 John L. Sullivan was buried in Old Calvary Cemetery (now Mount Calvary Cemetery) in Roslindale, beside Kate. “He was an old and valued friend, and I mourn his death,” Theodore Roosevelt said. It had been such a bitter winter, and the day of the funeral itself was so frigid, that the ground had to be dynamited to make room for his body—a parting touch he would surely have cherished. “Never has the American prize ring had such a character as Sullivan,” the New York Times observed, “and never again will the fighting game produce another man who will stamp his personality on the world of pugilism as the blunt, gray, old philosopher of Donelee Farm.” One hundred years have passed now, and great and memorable champions have come and gone to challenge that judgment. But John L. is father to them all.

Paul Beston is managing editor of City Journal and author of The Boxing Kings: When American Heavyweights Ruled the Ring.