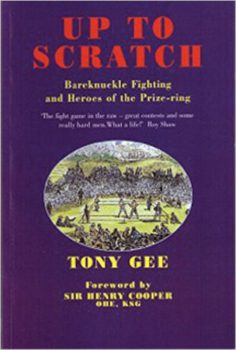 Boxing is a very ancient sport with a history going back thousands of years. But the origins of modern boxing can be traced to 17th century England where the sport reemerged after a 1000 year hiatus. After the death of Oliver Cromwell the restored monarchy of Charles II (1660-1685) freed England from the yoke of Puritan restraint. As a result, the populace began to enjoy a wide variety of old and new sporting diversions, including boxing. London, with its roiling urban suburbs and large population of poor people, became the perfect spawning ground for a new generation of fistic exponents, although the sport did not properly take off until the following century.

Three hundred years ago the rules for the sport were quite different than today.

Three hundred years ago the rules for the sport were quite different than today. Combatants fought bare-fisted and were allowed to throw an opponent to the ground provided he was grabbed above the waist. A round ended when a fighter was punched, thrown, or wrestled to the ground. The downed fighter was then carried back to his corner by his seconds and given 30 seconds to rest before both fighters had to return to the “scratch mark” (originally their side of a three-foot-square drawn in the center of the ring). If a fighter was too damaged to “come up to scratch” or “toe the mark” within the allotted time, he forfeited the match. The loser was considered “knocked out of time.”

There was no proscribed time limit to a bareknuckle prizefight. The contest ended only when a boxer either failed to come up to scratch or was disqualified for fouling. After the “New Rules” of 1838 superseded the rudimentary “Broughton’s Rules” fouls included butting with the head, striking a fallen opponent, kicking, gouging the eyes, and biting. Depending on when it ended the length of a bareknuckle fight could be measured in minutes or sometimes hours. Contests ran the gamut from insufferably boring (much wrestling and stalling) to extremely savage, bloody, and sometimes fatal.

Both the rich (including members of the aristocracy) and poorer elements of English society enjoyed betting on the outcome of prizefights. From the 1780s to the 1820s, boxing’s popularity had reached a point where it was considered the country’s national sport. Important bouts attracted thousands of spectators from all walks of life. Some of the best fighters even enjoyed the patronage of a member of the royal family.

Author and historian Tony Gee immerses us into this colorful and fascinating world.

Author and historian Tony Gee immerses us into this colorful and fascinating world. The meticulously researched book was originally published in 1998 and has recently been reissued in both soft cover and kindle version. It remains to this day the quintessential history of the English bareknuckle scene.

Few people are as qualified as Tony Gee to chronicle this history. He is the world’s foremost authority on the bareknuckle era of pugilism and has advised the British Museum, the National Portrait Gallery and the Jewish Museum of London and has contributed several articles to the Oxford Dictionary of National Biography.

“Up To Scratch” describes, in exquisite detail, the lives and battles, triumphs and tragedies, of some 70 pugilistic stars of the era. The vignettes are written in chronological order. Included are the exploits of such well-known bareknuckle bruisers as Daniel Mendoza, Tom Johnson, Jem Belcher, James “Deaf” Burke, Tom Sayers and Jem Mace.

While reading the bios of these hard men of the ring I was awestruck by their remarkable endurance and ability to withstand punishment often under the most trying of circumstances. Keep in mind that bareknuckle prizefights were fought outdoors and usually on bare turf. One of the many memorable stories the author describes is an 1827 contest between Ned Savage and Jem Wallace. During the bout a sudden and continuous downpour soaked the spectators and turned the ground into a quagmire. But no one wanted to see the fight called off, so the officials allowed it to continue.

As described by Gee: “The two combatants, covered in mud, waged an even, determined battle for two hours, although action then understandably flagged. At length, after a marathon 127 rounds lasting 147 minutes, Wallace was so completely exhausted that his friends gave in for him. Both men, totally insensible, were conveyed to the Swan, put to bed and bled. (This practice was then customary amongst the medical profession, but how it could help revive a fighter who had often already lost a lot of blood is difficult to comprehend – in fact, sometimes it could only have made matters worse.)” It is this type of detail that is common throughout the book.

One of the most unusual bouts described is a set-to that occurred in 1828. Both protagonists were dwarfs. Each fighter stood less than 4 feet tall and weighed under 100 pounds. “Despite the lack of interest shown by the Fancy, a large crowd was drawn to the event because of its strong novelty value.” The contest ended after 37 minutes.

Tony also describes an 1842 bout between the visiting American giant Charles Freeman, who was measured at 6 feet 9 inches tall (his height often exaggerated to over 7 feet) and the “Tipton Slasher”, William Perry. Other than size Freeman had little to recommend him.
“Unfortunately, like other giants who have attempted to find fistic fame through the years, Freeman’s boxing ability did not quite match up to his imposing physical appearance.” After this fight Freeman never fought again, preferring instead to concentrate on stage performances. The author’s research reveals what happened to the visiting American boxer after he retired from fistic combat: “Less than three years later he died, far from home, a victim of consumption brought on by careless living.”

There are also descriptions of fixed fights, fatal encounters, and behind the scenes maneuverings that shows how little things have changed over the centuries when it comes to the more corrupt and outlandish aspects of the sport.

The book comes to an end with a description of the downfall of bareknuckle boxing and the eventual acceptance of the Marquess of Queensberry rules that mandated boxing gloves and three minutes rounds with one minute of rest in between. As noted by the author; “Whilst its critics rejoiced in the demise of the traditional prize-ring, there were many who mourned the passing of an often corrupt, yet essentially noble, activity.”

In addition to a comprehensive bibliography and index the book is enhanced by several appendices that feature the nicknames of the fighters and another that defines boxing slang that was popular at the time such as “Bottom (Courage and fortitude), “Cove” (fellow), “Claret” (blood), “Fancy” (enthusiasts of a particular amusement, especially followers of the prize-ring), “Mill” (pugilistic encounter between two persons), “Muff” (someone awkward or stupid at an athletic pursuit), and many others.

Tony Gee is a wonderful storyteller. “Up to Scratch” provides a treasure trove of information about the lost world of bareknuckle boxing. It is an insightful look into one of boxing’s most dramatic and colorful eras and should be on the book shelf of every boxing fan in addition to anyone interested in this important aspect of England’s history.

Note: Boxing historian Mike Silver is the author of “The Arc of Boxing: The Rise and Decline of the Sweet Science” (McFarland Publishing, 2008), and most recently “Stars in the Ring: Jewish Champions in the Golden Age of Boxing: A Photographic History” (Lyons Press, 2016)