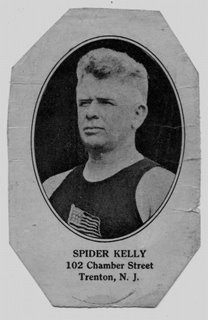 The above quote appears on the first page of Ernest Hemingway’s first major novel, The Sun Also Rises, published in 1926. Hemingway often based his characters on real people. John A. (Spider) Kelly was not a fictional character. He was the boxing instructor at Princeton University for 34 years (1902 to 1936). One of the main characters in the novel, a former collegiate boxing champion, is described as having been trained by Kelly at Princeton.

By all accounts Spider Kelly, a former professional boxer, was an excellent teacher-trainer.  Hemingway’s sentence is further proof of that. It would do well for today’s trainers to follow Spider Kelly’s example. At a body weight of 119 to 126 pounds a featherweight boxer has to rely on speed and mobility rather than strength and power. He must strive to remain an elusive target while still capable of landing more punches than his opponent. But before he learns how to throw a punch the beginner must be taught proper balance. Like a dancer, a boxer has to maintain balance while quickly changing tempo and direction. Effective footwork is not possible without proper balance. Building on that foundation the student boxer works up to more sophisticated defensive and offensive skills, including knowing what to do when an opponent makes a certain move.

So why do most of today’s boxers, irrespective of their weight division, fight like slow lumbering heavyweights who are looking for a knockout with every punch? We see it all the time. They plod forward or back (rarely circling), throw ill-timed punches, and appear to have no coherent strategy.  What used to be called “ring guile” or “craftiness” is missing. Classic defensive techniques such as ducking, slipping, weaving or parrying (common tactics used by the top boxers of past decades) are virtually non-existent. They become easy targets by remaining stationary after delivering a volley of punches. The most common defensive maneuver is to raise the gloves in rope-a-dope fashion and wait for the opponent to stop punching. Very few know how to effectively use the most fundamental punch in a boxer’s repertoire–the jab. Forget about feinting with a purpose or drawing a lead, or knowing how to slip and slide or clinch. Those words are not even in the vocabulary. And whatever happened to body punching?

In between rounds the corner’s instruction to the boxer is the oft heard and expletive laced “throw more punches!” –which is akin to a basketball coach imploring his team to “put the ball in the basket!”

Boxing may be the only sport where the further back you go, the better the athletes are.

This dumbed down version of boxing is not new. The overall skill level of boxers has been in decline for several decades. Boxing may be the only sport where the further back you go, the better the athletes are. In fact, it would be more accurate to rename the sport “fighting” because boxing, as many of us “old timers” knew it, no longer exists. There are a number of reasons for this but first and foremost is the lack of qualified teacher-trainers.

I don’t blame the boxers. It is not their fault. They have the potential to be much better than they are because the ability is there. I blame the trainers who cannot teach what they themselves do not know. Yes, there are a few exceptions. Among contemporary boxers three names come to mind—Gennady Golovkin, Vasyl Lomachenko and Terence Crawford. These very talented athletes display some of the old school moves. Lomachenko (who took ballet lessons as a youth) has excellent footwork. Golovkin has a fine left jab and knows how to set up his power punches. He also understands the value of body punching. Crawford’s speed and instincts are impressive but he tries too hard for a knockout and still has much to learn. If we could time travel these boxers back 60 or more years ago they would have been considered promising prospects. Despite their obvious talent, they are not yet at the level where we would place them among the elite boxers of that era. Perhaps with more experience and exposure to better competition they could have won a world championship back then. But the road taking them to a title bout would have been far more difficult than the one they have traveled. Why? Because in every decade from the 1920s to the 1950s there were dozens of Golovkins, Lomachenkos and Crawfords vying for a contender slot. The competition was brutal. To win one of the eight title belts was truly an extraordinary achievement.

So where have all the good trainers gone?

What happened was that boxing’s mentoring system for turning out the next batch of well-schooled trainers began to break down in the decade following the end of World War II. By the late 1950s hundreds of neighborhood arenas, boxing’s farm system for developing new talent, had closed shop because they could not compete with free televised boxing almost every night of the week. Post war prosperity and the G.I. Bill further thinned the ranks of potential professional boxers. Gym memberships declined causing many to close. In the big cities the ranks of master teacher-trainers, never a huge number, began to be depleted. They either retired or left the sport to pursue other occupations and took their knowledge with them.

By the 1970s only a handful were left. This caused a disconnect in the mentoring system. A few dinosaurs continued to teach into the 1980s—Eddie Futch, Angelo Dundee, Cus D’Amato, and Mike Capriano—but they were the last of the breed. The next generation of trainers (who came of age after the 1980s) were not of the same caliber and lacked the knowledge and experience of the old school masters. Most of them were part time instructors who held full time jobs during the day and taught boxing in the evenings. In time mediocre fighters became mediocre trainers. It is no surprise that the two best teacher-trainers today are Teddy Atlas and Freddie Roach. Atlas was mentored by Cus D’Amato and Roach was trained by Eddie Futch.

OK. Enough complaining. Is there anything that can be done to improve boxers’ skills in the absence of quality teachers? (I won’t even attempt to address the insane organization of professional boxing. That mess is beyond help).

Over the past 40 years I have collected dozens of boxing instruction books from the mid-1800s to the present. Most have some useful information but I was always on the lookout for a manual that was all encompassing. My search ended with the discovery of two indispensable books that should be required reading and study for every current or wannabe trainer and boxer.

The greatest boxing instructional book ever written is the 286 page Naval Aviation Physical Training Manual of Boxing, published in 1943.  It was prepared by and for the officers in charge of the instruction of Boxing in Naval Aviation.  Keep in mind this book was published at the height of World War II. As explained in the introduction, boxing was part of Naval Aviation training because it was thought to “quickly acclimate the body and mind to the violence and shock so foreign to modern day youth, yet so absolutely essential to fighting men.” Boxing, it was felt, helped the cadet make that transition. I am astounded by the thoroughness of this book. You will not get better and more detailed instruction anywhere else. Example: It not only describes in detail every conceivable punch and defensive maneuver but also dozens of long forgotten combinations and coaching hints. The book was obviously written by very capable boxing trainers (although none are identified by name). It includes many photos and is available on Amazon but costs about $130 dollars. For those serious about seeking knowledge it’s worth every penny.

The second outstanding instructional book I recommend is Boxing: A Self-Instructional Manual by Edwin L. Haislet, first published in 1940 and re-issued in 1982. Haislet was assistant professor of physical education, boxing coach University of Minnesota, and director of the Northwest Golden Gloves Tournament. Before I discovered the Navy book this was my gold standard for instructional manuals. It is 120 pages, illustrated, and is an excellent source of valuable information. A reprint selling for $30 dollars is available on Amazon.

I would also strongly recommend anyone interested in why and how the sport devolved over the past thirty years to read my first book, “The Arc of Boxing: The Rise and Decline of the Sweet Science”.  It contains extensive commentary by several top trainers, including Atlas and Roach.

If there were a course given to certify and license boxing trainers (and there certainly should be) these three books would be required reading.

One final note: Thanks to You Tube we have access to films of some of the greatest boxers of the twentieth century. It would be beneficial if these films were studied, but understanding would be enhanced if the aforementioned books were read first. There are scores of videos to choose from. I have selected five—one each from the 1920s, 30s, 40s, 50s and 60s to serve as an example of the type of artistry in boxing that no longer exists.

Mike Silver’s newest book is The Night the Referee Hit Back: Memorable Moments From the World of Boxing.