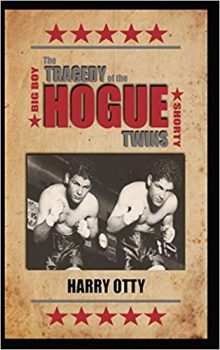 “[When the Hogue twins were 31 years old,] they were still young men, but life had taken its toll on them. Shorty was living in a variety of care facilities, and Big Boy, who spent several years in and out of Atascadero Mental Hospital,  appeared to have no discernible skills outside of the ring other than cheating at cards.”

The Tragedy of the Hogue Twins

Willard Joseph “Big Boy” Hogue and Willis Burton “Shorty” Hogue  are their names, and boxing historian Harry Otty has written a meticulously researched, eminently readable, and informative book about them. Enhanced by many photos of the twins, family members, friends, and opponents, it’s titled The Tragedy of the Hogue Twins (REaD Corner).

Harry’s intention is that readers take from his book the realization that  “boxing, for all its hype and glamour, is a brutal sport and some of those who fight to entertain the fans don’t make as much money as the Floyd Mayweathers of this world. Most fighters come away with little in the way of tangible rewards and some come out with a lot less than what they went in with— as was the case with Shorty and Big Boy Hogue.”

At first Otty, the author of the acclaimed Charley Burley and the Black Murderers’ Row, had no idea who the Hogues were, but after extensive research, he says, “I ended up in touch with family members, and then [learned more] about [the twins], and thought theirs was a tale worth telling. [The Hogues] are not well-known outside of the hardcore boxing fraternity, and I thought that was a shame. I think Shorty Hogue belongs in the West Coast Hall of Fame – he beat some great fighters and, perhaps if handled better, could have gone a great deal further than he did.”

Obtaining first-hand information from the Hogue family was challenging for Harry: “With the Charley Burley book I wanted people to know a little more about him outside of boxing, so I relied on friends and family for stories and insights . . . Getting the same insight on the twins’ lives as I got with Charley Burley was  difficult, as there were no siblings left to talk about them. There were a couple of nephews, a grandson and a daughter, but the daughter was not willing to communicate. The snippets of information I did get from the family often led to other avenues to explore. It was a slow process.” 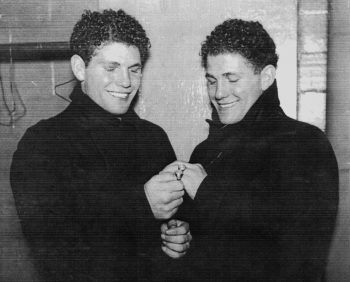 Hailing from Jacumba, California, “Big Boy” was a welterweight, Shorty a middleweight. They had outstanding amateur boxing careers and turned professional on March 3, 1939. In their debuts at the San Diego Coliseum, Shorty stopped Al Jimenez in the third round and Big Boy garnered a six-round decision over George Romero.

Their rematch took place in 1941, at the San Diego Coliseum, before 4,000 fans. Harry brings the fight to life with his vivid description of the tenth and final round: “The tenth started with Archie staggering Shorty once more, but the determined twin came back yet again to swamp Moore with a constant cascade of leather. The aggression, determination and sheer volume of punches was enough for referee Benny Whitman to cast his vote in favor of Shorty.”

When the decision was announced, Harry writes, “The reaction would have been the same had the call gone the other way. Afterward promoter Benny Ford called the fight the greatest he had ever seen in a San Diego ring.”

Their third bout took place in 1942, again at the San Diego Coliseum, and Archie had his revenge, stopping Shorty in two rounds.

How good was the Row? Many champions and contenders ducked them, including Sugar Ray Robinson, whom Burley said he’d fight for nothing,  the great Henry Armstrong, Freddie Cochrane, and Rocky Graziano.

In his book Murderers’ Row, boxing historian Springs Toledo quoted what former middleweight champion Jake LaMotta said about the Row: “When those bombers got the chance against a white kid on the square, they sure tried their best to show what they could do, because they all had a dream that maybe they’d get enough of an audience clamoring for them so that someday some promoter would give them the chance they deserved and they’d get a shot at the real money.”

And how good were the Hogues? Harry quotes Archie Moore who praised them as “’two of the greatest prospects in my time. They had everything needed to be world champions. Well, maybe one thing was missing—patience.’”

Brace yourself for the book’s last chapters, which chronicle the twins’ horrific downward spiral. Shorty never recovered from his TKO loss, in early 1942, to the mighty Burley. He fought eight more times that year, winning only twice. His six losses were by KO.

After his last fight that year he joined the Navy, but his military career was short-lived. His behavior was unstable and “diagnosed by the Naval medical staff [as] ‘traumatic encephalopathy.’” . . . “Come April 9, 1943, Shorty Hogue . . . was now also ex-naval reserve . . . mentally unfit for military service, physically no longer able to continue in his chosen profession, and with no discernible skills, [he] was consigned to the scrap heap at 22.” Shorty  died in his sleep, at Sleepy Valley Rest Home, on November 29, 1971. He was 50 years old.

Big Boy didn’t fare any better. In his final fifteen outings, he was stopped ten times. After retiring in 1952, he lived a trouble-filled life.

Jumping ahead to 1964 and Big Boy’s arrest: The police decided to hold [him] until he had ‘sobered up,’ Otty writes, “but he never did. Just before midnight, an officer went in to check on the prisoner. He found Big Boy hanging in his cell. He had used his own belt to end his life. He was only 43.

“It appears that the symptoms of ‘punch drunk syndrome’”—dementia pugilistica—”[had affected] Big Boy as much as Shorty; the difference was that Shorty had received an official diagnosis,” Otty writes, adding that “[reporter Nelson Fisher] in one paragraph summed up [the Hogue twins’] lives and careers almost perfectly: ‘If their boxing careers were crowned by success and popularity, their lives after they put away the gloves were as contrastingly unfortunate, eventually tragic.’”

Over the years many boxing writers and scholars have inspired Harry: “Like most boxing historians. I have read a great deal of books, essays, newspaper reports, and I would say I was most likely influenced by all of them in one way or another.”

Boxing historians Kevin Smith and Jerry Fitch rank high as authors who persuaded Harry he “could/should do it” himself. Says Harry: “I read a good deal of Jerry’s essays in the 1980s and 90s and really liked his stuff on the Cleveland greats (Jimmy Bivins, Lloyd Marshall, Joey Maxim, etc.) and Kevin Smith’s work on the great black fighters opened my eyes to just how deep and wide the history of the sport was. Boxing historian and author John Ochs was a fantastic help once I had the book compiled and (almost) ready to publish.”

Harry commends “the many members of the IBRO who have written fantastic histories and biographies on some of the greats from our sport (and some of the not so well-known, too). I think that is what makes the organization so good – the breadth and depth of knowledge is amazing, and more people should join up!”

A contributing writer for the IBRO Journal, Roger Zotti has written two books on boxing, Friday Night World and The Proper Pugilist. He can be reached at rogerzotti [at] aol [dot] com. You’ll make him happy by emailing him and saying nice things about his writing.”