Book Review: “The Duke: The Life and Lies of Tommy Morrison by Carlos Acevedo” 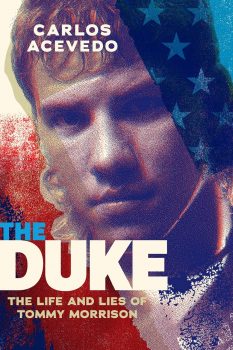 In 1989 a handsome and charismatic twenty year old undefeated professional boxer named Tommy “The Duke” Morrison was on a fast track to super stardom. But all was not as it seemed. “With his bleached pretty-boy look, his genuine charm, and his heartland roots” writes

Acevedo,  “Morrison was billed as a wholesome All-American type, despite an unsavory background that included any number of misdeeds, if not misdemeanors…Like Tyson, Morrison could not restrain his tumultuous nature—not for long, anyway.”

Tommy’s early career had all the earmarks of a “Tysonesque” buildup. That was no coincidence since his manager at the time was Bill Cayton, the entrepreneur who was also Mike Tyson’s first manager. In his first year as a pro Morrison was matched with one tomato can after another resulting in 20 straight wins, including 17 by knockout (15 in two rounds or less). The build-up was intended to impress the masses and get him lucrative television bouts and eventually a shot at the heavyweight championship.

Despite the pushover competition, it was obvious that Morrison had a ton of natural talent and potential. As an amateur he was rated among the USA’s best heavyweights. He possessed good instincts, fast hands, and technical skills superior to most heavyweights. But what really set him apart was his explosive left hook. In addition, his PR team told the press that Tommy was a great nephew of the legendary movie star John Wayne (real name Marion Morrison aka “The Duke”). Whether true of not, the claim—never verified—added to his mystique.

One year after turning pro Morrison’s knockout binge and photogenic visage caught the eye of Sylvester Stallone who decided to give the young fighter a co-starring role in Rock V. The notoriety vaulted him into the public consciousness but it was the beginning of the end for Tommy, although no one at the time could predict just how bad the train wreck was going to be.

Aside from his usual recreational drug use, there is evidence that Morrison had begun taking steroids.

It was not just the Hollywood parties and endless parade of young women who found the attractive—and willing—movie star/athlete irresistible.  Aside from his usual recreational drug use, there is evidence that Morrison had begun taking steroids. The drug, popular with body builders and macho actors, was used by Morrison to maintain enough bulk to cope with oversized heavyweights.  Six months later he resumed his boxing career. His body now appeared more muscular and defined and fifteen pounds heavier. Thereafter he never weighed less than 220 pounds for a fight.

Steroid use by an athlete has both physical and mental side effects. Unstable behavior, including lack of impulse control and poor judgement has been documented. If someone already has these tendencies they can be exacerbated. Injecting steroids can also negatively affect stamina over the long haul because the increase in muscle mass requires more oxygen to counter fatigue. This could have been the case in Morrison’s disastrous fight with former Olympic heavyweight champion Ray Mercer on October 18, 1991. At the time Morrison was undefeated in 27 fights with 23 wins coming by KO. He was the favorite to defeat Mercer (17-0).

The referee, who seemed to be half asleep, stood by impassively while Mercer connected with nine punches, with the last three rendering Morrison unconscious. Only the ropes kept Morrison from falling.

Morrison dominated the first four rounds, outpunching and out boxing Mercer. But in the fifth round he suddenly seemed tired. In the midst of an exchange Mercer caught Morrison with a series of punches that drove him into the ropes. What happened next was one of the most disturbing endings to a bout ever seen. The referee, who seemed to be half asleep, stood by impassively while Mercer connected with nine punches, with the last three rendering Morrison unconscious. Only the ropes kept Morrison from falling. While still unconscious he was hit with six additional full power shots before the referee finally pulled Mercer off. It was a devastating defeat.

Tommy began his comeback 4 months later and over the next year knocked off eight opponents. The winning streak led to a match with former heavyweight champion George Foreman. In the best shape of his life, Tommy avoided going for the knockout, and instead used his superior speed and a jab and move strategy to win a unanimous 12 round decision. It was an impressive victory but just two fights later disaster struck once again when underdog Michael Bentt stopped Tommy in the first round after dropping him three times. Bentt was supposed to be a safe tune-up for an upcoming bout with heavyweight champion Lennox Lewis. The Lewis bout was cancelled. Not only did Tommy lose out on a 7.5 million payday, he also lost his manager who walked away from Tommy after the loss.

It was at this point that Morrison’s private life began to spin out of control. Convicted of drunk driving and drug possession (it was not the first time) he served 14 months in prison. Resuming his career Morrison took on an assortment of professional losers whose sole purpose was to fatten the records of prospects and contenders.  Acevedo: “Now more than ever, it seems, Morrison and the boxing underbelly are intertwined like characters in the final, bleak pages of McTeague, handcuffed to each other  (one of them a corpse) in Death Valley, California, waiting for the blistering sun to render its impersonal judgement.”

Boxing’s lack of uniform standards, even at the height of the AIDS epidemic, did not require blood tests.

If being an ex-con, a drug addict, a bigamist (yes, he was married to two woman at the same time), and an alcoholic wasn’t bad enough, in 1996 the Nevada Boxing Commission lifted Morrison’s license when a blood test revealed he had the HIV virus. The commission refused to give out details, but shortly thereafter Morrison held a news conference and revealed he had contracted HIV because of a “permissive, fast and reckless lifestyle.” One person who knew Morrison said he actually had gotten AIDS in 1989 but had remained silent in order to continue fighting. Boxing’s lack of uniform standards, even at the height of the AIDS epidemic, did not require blood tests. (Eventually with all the publicity about Morrison several states did adopt mandatory testing for AIDS).

As Morrison’s physical condition continued to deteriorate so did his mind. His thinking became increasingly delusional and paranoid, including bizarre claims of possessing powers of teleportation. Continued drug use and CTE just made things worse. Tommy eventually convinced himself he did not have the AIDS virus, claiming the blood tests gave a false positive result. But as long as he refused to be retested no boxing commission in the U.S. would license him to fight.

Incredibly, ten years after his last fight, and still refusing to be retested, Morrison was granted a license to fight in 2007 at the Mountaineer Casino Racetrack in West Virginia. He knocked out a fighter with a 4-2 record in the second round. One year later he travelled to the Dominican Republic and stopped another obscure opponent in the third round. After a proposed match in Canada was cancelled when Morrison refused the boxing commission’s request for a blood test he finally hung up his gloves for good.

But Acevedo does acknowledge that Morrison was a fine athlete with “the fastest hands of any heavyweight since a prime Mike Tyson.”

Morrison ended his career with a record of 48-3, with 42 knockouts. The record is deceiving. Acevedo: “On the surface, this ledger is impressive, but boxing is a sport in which nothing should be taken at face value. From the day he turned pro, Morrison epitomized the smoke-and-mirror world of boxing where the line between athletic event and consumer fraud is often thinner than a lightbulb filament”. But Acevedo does acknowledge that Morrison was a fine athlete with “the fastest hands of any heavyweight since a prime Mike Tyson.” He also pays tribute to “the kind of heart [guts] often lacking among his peers” and notes the lethal quality of his left hook that combined with an exciting style that made him a perennial fan favorite.

In August 2013, Morrison’s mother told ESPN that Tommy had “full-blown AIDS” and was “in his final days.” She also stated that Morrison had been bedridden for over a year. Tommy Morrison died on September 1, 2013. He was 44 years old.

Carlos Acevedo is that rare talent who inhabits the best of both worlds. He is a magnificent wordsmith whose knowledge and understanding of the “sweet science” is apparent on every page.

There are some very talented authors who have written colorfully about boxing but come up short in their actual understanding of the technical aspects of the sport; and there are other authors whose writing ability is mediocre at best, but whose knowledge of the art of boxing in all its varied nuance is matched by very few. Carlos Acevedo is that rare talent who inhabits the best of both worlds. He is a magnificent wordsmith whose knowledge and understanding of the “sweet science” is apparent on every page. That was my impression after reading his first book “Sporting Blood: Tales From the Dark Side of Boxing”. This work is no exception.

Mike Silver’s books include “The Arc of Boxing: The Rise and Decline of the Sweet Science” and “Stars in the Ring: Jewish Champions in the Golden Age of Boxing-A Photographic History”; His most recent book is “The Night the Referee Hit Back: Memorable Moments From the World of Boxing”.