100 years ago: The Law That Gave Birth to the Modern Era of Boxing 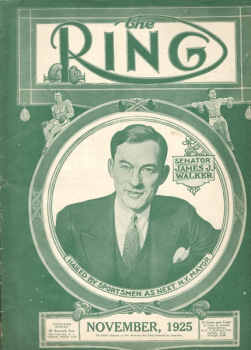 From 1895 to 1919 professional boxing was either tolerated or outlawed in various cities and states, including New York. The Frawley law, passed in 1911, had created the New York State Athletic Commission to oversee the sport. Some 40 boxing clubs operated under its purview. In 1917, after a boxer was fatally injured in a bout, reformers convinced the legislature to repeal the Frawley law and abolish boxing in the state. The ban lasted for three years. In 1920, after much political maneuvering, professional boxing returned to New York with the passage of The Walker Law.

Boxing, despite its ups and downs, had always been popular with the general public. Now, on the cusp of the Roaring Twenties, what it needed to realize its full potential was a powerful and stabilizing organizational structure with tighter controls over the sport and greater safety measures. The Walker Law was the answer. Most importantly, it allowed New York City to quickly regain its position as the boxing capital of the world.

Named after its sponsor, state senator and future New York City mayor (1926-31), James J. (Jimmy) Walker, the law brought back the State Athletic Commission but with enhanced rules and guidelines. One hundred years ago, on May 24, 1920, it was signed into law by Governor Al Smith and took effect on the first day of September.

Three commissioners appointed by Governor Smith supervised the sport. The new law mandated the licensing of all persons officially connected with boxing bouts—boxers, managers, promoters, matchmakers, corner men, referees and judges. All shows required a physician in attendance. Matches could not exceed 15 rounds. Within a short time dozens of armories, arenas and stadiums began presenting boxing cards on a regular basis. There certainly was no shortage of boxers. By March of 1924 New York State had licensed 6,123 professional boxers.

Any person who violated the rules of the commission or engaged in behavior considered detrimental to boxing would risk losing his license. It was the intention of the commission to improve the public’s perception of boxing by attempting (albeit with mixed results) to curtail the influence of gamblers, criminals and other undesirables.

Of course a prime reason for legalizing professional boxing was the tax revenues that would be realized via licensing fees and a 5 percent tax on the gross receipts of every boxing card. Three months after the first professional bouts were staged under the new law, the sport had already paid $75,000 into the New York state treasury.

Politicians in other states saw opportunity for increased tax revenues, jobs, and political patronage if they followed New York’s example and legalized boxing under government auspices. Hugely motivating was the 1921 heavyweight title bout between champion Jack Dempsey and the dashing French challenger Georges Carpentier. The bout drew 90,000 fans and nearly 2 million dollars in paid admissions, breaking all previous records in both attendance and gate receipts. Whereas in 1917 only 23 states had officially legalized the sport, by 1925 the number was up to 43. They all used the template of the New York Commission as a guide.

During the 1920s boxing reached unprecedented levels of popularity, even eclipsing baseball in terms of live attendance figures and newspaper coverage. Heavyweight title fights became the most lavish and anticipated spectacle in sports. In 1926 and 1927Jack Dempsey and Gene Tunney drew over 100,000 people for each of their two title fights in Philadelphia and Chicago.

The social, artistic, and cultural dynamism of the Roaring Twenties, in concert with the media’s focus on celebrities (especially sports heroes and movie stars), glamorized boxing and made Jack Dempsey the first boxing superstar of the twentieth century. But due credit must be given to Tex Rickard whose promotional genius and reputation for integrity was instrumental in revitalizing the sport. Rickard made his headquarters in New York City and his success was responsible for the building of a new and much larger Madison Square Garden in 1925. Under his watch boxing gained a respectability it had never known before. It was Rickard who transformed boxing into popular entertainment for a mass audience. The business of sports entertainment would never be the same.

The Walker law also was a catalyst for others to hitch their star to boxing. In 1922 Nat Fleischer, a 33 year old sports editor for several New York papers, launched The Ring magazine with Tex Rickard serving as silent partner (Fleischer acquired full ownership in 1929). For the next 50 years “The Bible of Boxing” was the sport’s most important and authoritative trade publication. Fleischer often spoke out against corruption within the sport and advocated for standard physical exams and rules. The Ring “top ten” ratings of contenders for every weight class became a monthly feature of the magazine and under Fleischer’s stewardship was a trusted resource for everyone interested in the sport.

Dempsey, Tunney, Rickard, Walker, Fleischer, The Ring magazine, Madison Square Garden, New York City—the timing couldn’t have been more perfect. They all came together in the 1920s to create boxing’s greatest decade. But none of it would have been possible without the passage of the law that allowed it to happen.

Mike Silver’s newest book is “The Night the Referee Hit Back: Memorable Moments From the World of Boxing” (Rowman & Littlefield Publishers, June 2020).