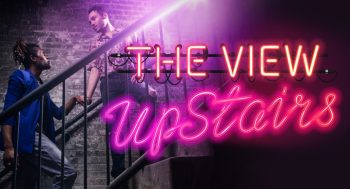 From May 31 through June 22, 2019, SpeakEasy Stage Company will proudly present the New England Premiere production of the acclaimed Off-Broadway musical THE VIEW UPSTAIRS.

THE VIEW UPSTAIRS was inspired by a historical event, the firebombing of the UpStairs Lounge in New Orleans in 1973, which, up until the Pulse Nightclub shooting in 2016, was the deadliest assault on a gay bar in US history. THE VIEW UPSTAIRS tells the story of Wes, a young fashion designer who buys an abandoned building in the French Quarter of New Orleans.   One night, while exploring his new purchase, Wes is transported to the UpStairs Lounge, a vibrant seventies gay bar, where he begins an exhilarating journey of self exploration that spans two generations of gay history.  Featuring a gritty, glam rock score and a tight-knit ensemble of unforgettable characters, THE VIEW UPSTAIRS asks what has been gained and lost in the fight for equality, and how the past can inform the future.

Described by The New Yorker as “equal parts Bohemia and Broadway,” Max Vernon has emerged as a singular and eccentric voice in the world of musical theatre. He received the Lucille Lortel Award for Best Musical, three Drama-Desk Nominations, a Jonathan Larson Grant, and the Richard Rodgers Award for his musicals The View UpStairs and KPOP, both of which had critically-acclaimed extended Off-Broadway runs. Notable concert performances include the Kennedy Center, Lincoln Center, Joe’s Pub, and The Metropolitan Museum of Art.

SpeakEasy Founder and Producing Artistic Director Paul Daigneault will direct the Boston Premiere of THE VIEW UPSTAIRS. Winner of three Elliot Norton Awards including the 2014 Norton Prize for Sustained Excellence, Mr. Daigneault had directed dozens of Boston premieres, including the company’s recent productions of The Scottsboro Boys, The Curious Incident of the Dog in the Night-Time, Allegiance, and Fun Home.

Adam Bokunewicz will music direct and Alessandra Valea will choreograph.

THE VIEW UPSTAIRS will run for four weeks, from May 31 through June 22, 2019, in the Plaza Theatre at the Boston Center for the Arts, 537 Tremont Street in Boston’s South End.