If there ever was an individual with the wherewithal, honesty and courage to clean up professional boxing that man would have been Theodore Roosevelt.

No U.S. President, past or present, was more associated with the “sweet science” than Theodore Roosevelt.

No U.S. President, past or present, was more associated with the “sweet science” than Theodore Roosevelt. It was not by accident that T.R. developed his interest in boxing. In Roosevelt’s formative years young men from the best families practiced the manly art. In the late 1800s amateur boxing “in gentlemanly fashion” (fought with gloves under Queensberry rules) was included in the athletic programs of Harvard and Yale. (Both institutions were among a handful of colleges that offered boxing instruction to their students). The future President boxed as a 135 pound lightweight while attending Harvard. He entered several tournaments, and though only moderately successful, his courage and tenacity was admired by his classmates.

During one tournament match he was hit hard by his opponent just after the referee yelled “time”. The crowd hissed and shouted “Foul, foul!” Roosevelt is supposed to have cried out “Hush! He didn’t hear.” Years later, during his campaign for the Presidency, his supporters would frequently reference the incident as an example of his extraordinary character.
In his junior year at Harvard (1879) T.R. fought for the university cup against a senior and was “severely punished” according to the New York Times. The Times often reported on the athletic exploits of Ivy League athletes as these schools were considered incubators for the future economic, social and political leaders of America. His opponent was two or three inches taller and had a much longer reach. “When time was called after the last round,” one spectator recalled, “his face was dashed with blood and he was much winded; but his spirit did not flag, and if there had been another round, he would have gone into it with undiminished determination.”

T.R. was at best a fair boxer and athlete, but he loved boxing, and was a steadfast supporter of the sport as long as it remained free of gambling and corruption. In 1896, while serving as police commissioner of New York City, Roosevelt endorsed a bill that legalized boxing in the state. He believed that under the right circumstances boxing had value as a “vigorous healthful sport that develops courage, keenness of mind, quickness of eye, and a spirit of combativeness that fits every boy who engages in it for the daily tasks that confront him.” But the professional side of the sport remained a problem for him. In 1899, during his term as New York’s Governor, boxing was rocked by a number of major betting scandals and fixed fights. The following year he reluctantly signed a bill outlawing professional prizefighting in New York State. (The ban lasted four years).

Roosevelt’s interest in athletics, and specifically boxing, was the result of a lifelong pursuit of what he called “The Strenuous Life.” TR exercised daily and was constantly challenging himself to do better. His favorite sports were boxing, tennis, hiking, rowing, polo and horseback riding. He greatly admired boxers and formed friendships with John L. Sullivan, Bob Fitzsimmons, Battling Nelson and Mike Donovan. Even while occupying the White House (1901-1909) Roosevelt enjoyed boxing with an array of sparring partners, including former professionals, several times each week. By then the President was a full-fledged heavyweight, weighing around 190 pounds

.
During a sparring session with a military aide Roosevelt took a hard punch to his left eye. He gradually lost sight in the damaged orb, but that information was not made public until many years later. Although the injury failed to dampen his enthusiasm for boxing he thereafter confined his physical jousts to practicing judo, attaining a third degree brown belt.

Of all the fighters Roosevelt knew he was closest to Sullivan

Of all the fighters Roosevelt knew he was closest to Sullivan, who reigned as heavyweight champion from 1882 to 1892. They first met in the mid-1890s when TR was a crusading police commissioner in New York City. Sullivan had retired in 1892 after losing the title to James J. Corbett, but the public’s adulation for “The Great John L.” endured well after his last bout. During that time he earned his living as a professional entertainer and temperance lecturer.

The Patrician Roosevelt and the roughhewn Sullivan, an Irish-American from an urban, working class background, formed a sort of mutual admiration society based on their common interests. They were the same age, and as noted by Sullivan biographer Michael T. Isenberg, “Each worshipped the shrine of masculinity and had, in his different way, been a missionary of the strenuous life; each was his own brass band.” 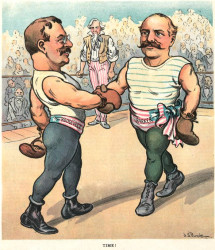 Roosevelt’s friendship with Sullivan remained strong during and after his Presidency. In later years Sullivan was a frequent guest at Roosevelt’s Sagamore Hill Estate. Both of these fascinating and charismatic individuals were perfect symbols of their era. Energetic, confident, assertive and occasionally reckless their colorful personalities embodied the qualities of a country ascending to greatness at the turn of the last century.

The 25th President of the United States would have made a wonderful boxing commissioner but after his “Rough Rider” campaign in Cuba during the Spanish-American War of 1898 bigger and more important responsibilities awaited him. But if there ever was an individual with the wherewithal, honesty and courage to clean up professional boxing that man would have been Theodore Roosevelt.

Mike Silver is the author of “The Arc of Boxing: The Rise and Decline of the Sweet Science” (McFarland Publishers, paperback 2014).