Shatner’s World: We Just Live In It 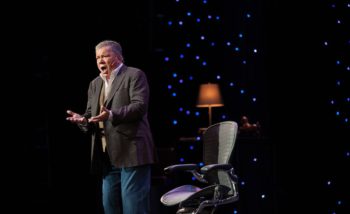 After being in show business for over 60 years it’s not surprising that a person should have a large store of good stories to tell. But it’s something of a wonder that at 85 he could tell them with the same kind of energy and enthusiasm that a man 30 years younger would have a hard time summoning.

Famed actor, writer, director and cultural phenomenon Williiam Shatner’s one man show, Shatner’s World: We Just Live In It, presented October 15 at Hartford’s Bushnell Theater was funny, moving, interesting, and totally engrossing. At 85 Shatner spent over 2 1/4 hours flawlessly and engagingly delivering the story of his life. He incorporated movie clips, TV clips, music and ended the night with a song. He was unfailingly warm and Real, which just happens to be the title of the song he closed with. He didn’t shy away from some of the controversies that have surrounded him over the years, told of his post-Star Trek poverty and desperation and dropped many famous names without appearing to be a tiresome name dropper.

Pacing from one side of the stage to the other, he punctuated his stories with his famous staccato delivery and physicality, rarely sitting down on the chair that was his only real prop; at one point lifting said chair above his head to highlight a particularly dramatic moment. But the whole night was not taken up solely with over-the-top gestures. Shatner was often at his most affective relating stories about his family and their varied travails including his father’s death and coming home and finding Nereen, his then wife dead at the bottom of their pool, a victim of the alcoholism she couldn’t beat. At moments like that Shatner displayed a range that most might not realize he possesses.
. 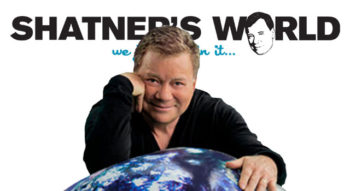 Thematically the show touched upon life, love and the inescapability of death. He has been doing the show all around the world since 2012 and has honed it and refined it to the point where it appears to be a man just telling stories but is in fact a very well-crafted entertainment. Even if you have spent the last 60 years in a cave and had no idea who William Shatner was the show would’ve been entertaining and enjoyable. Shatner as we all know is somewhat ubiquitous so you never can tell when he might show up near your town. If he does you’d be doing yourself a favor by going to see him and finding out why this really is Shatner’s World.