You know summer will soon be here when the stage at the Ogunquit Playhouse raises its curtain for a new season. And this year for their 85th anniversary they have kicked it off with the very popular jukebox musical Mamma Mia! With an energetic cast led by Jodie Langel as Donna and Patrick Cassidy as Sam it is a fun evening of music and laughs that has the audience on its feet singing and dancing along.

The story about Sophie (Briana Rapa), Donna’s daughter who was born out of wedlock twenty-one years earlier, takes place as she is preparing for her wedding day in Greece where she lives with her mother Donna who runs a local taverna. Sophie desperately wants to find out who her father is and has, by peeking into her mother’s diary, narrowed the possibility down to three men all of whom she invites to the wedding. This leads to some confusion and much laughter as she tries to figure out which of the three is dad.

…an evening filled with laughs, music, and great dancing…

The story is a great vehicle for the music of Abba, and that is what it was written to be. But this is not an Abba tribute show. It is an evening filled with laughs, music, and great dancing, all set on a beautiful stage meant to be the Greek seaside. The story is fun and touching, filled with vivid colors and loaded with energy. Those colors and the changing sets along with beautiful lighting, had me feeling the sea breezes of the Mediterranean. Of course, it helps being within a stone’s throw of Ogunquit Beach.

Oh, did I mention this is fun? The music is fun, the dancing is fun, the story is fun. Seeing dancers performing wearing huge yellow swim fins is, well, fun. There are so many moments like that. The Playhouse has given us all a welcome to summer gift.

This is not Chekov or O’Neil, and you won’t leave the theater contemplating the mysteries of life. It is simply a nice story that will have you feeling good. You will  leave the theater feeling happy, with a lot of music dancing in your ears. After an evening of Mamma Mia! at the Ogunquit Playhouse you will be more than ready for summer. This is a production that calls out “Take A Chance On Me”, and will have you saying,”Thank You For The Music”. 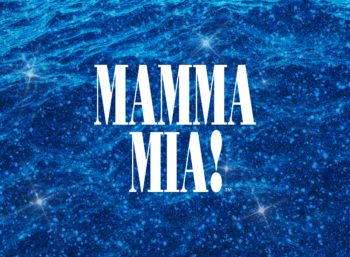