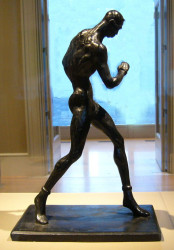 Deep within the Metropolitan Museum’s American galleries and flanked by two mid-twentieth century paintings (one depicting a guileless, dour clown; the other a ferocious acrobat) stands a statue, rendered in bronze, of the great Cuban featherweight Kid Chocolate. Born Eligio Sadiñas Montalvo in 1910, Kid Chocolate was a Super Featherweight who gradually moved up in weight divisions to become Cuba’s first world champion, all the while living hard and indulging freely in women and booze. When he moved to the Junior Lightweight division in 1931, he knocked out Benny Bass for the title. At the end of that same year he moved up in weight again, challenging Tony Canzoneri as a Lightweight to lose in a 15 round decision.

Standing at about a foot and a half, the sculpture was created by the African-American artist James Richmond Barthé when he was 41 years old. Born in 1901, seemingly under a lucky star, Barthé left his impoverished childhood in St. Louis, Mississippi behind him when a wealthy family of benefactors took him under their wing when he was fourteen. With their financial support and political pull, Barthé attended the Art Institute of Chicago – a rare instance of a young black man gaining access to formal artistic training at a time when most colleges were not accepting black students. Though he garnered lucrative work as a portrait painter within Chicago’s affluent black community during his time at the Art Institute, he nonetheless became restless. New York – the world’s artistic epicenter – was beckoning, and so he left upon graduation for uptown Manhattan to join the Harlem Renaissance and its jazz-fueled nightlife which, along with the Great Depression, was in full swing.

Somewhere between a plodding Giacometti figure and the swift, frantic advance of Ernst Barlach’s sword-wielding Avenger is Kid Chocolate’s display of the controlled and graceful but brutish energy of the pugilist in mid-swing. Head tucked, body bouncing on the balls of the feet with the lead foot forward, right arm crooked for a body shot or a swift uppercut and a rangy left arm hanging for a split second at his side, the figure seems ready to deliver a hook with a quick pivot of the feet. Barthé created the Boxer from memory, making the accuracy of musculature, facial features and the fighter’s stance even more impressive. Form has been exaggerated to the point of distortion: rangy beyond belief, the Kid’s waist is almost impossibly narrow in comparison to his broad shoulders. His hair, quaffed, oiled, and set in a pompadour, revels in detail the level of which would not be out of place in a hairdresser’s style book. His light bounce suggests a light sparring session or shadow boxing exhibition. In almost every aspect Barthé’s preoccupation with the fighter’s physical beauty is evident.

As a homosexual living in an age hostile to both gays and African Americans, Barthé would not have been able to portray the male figure with any degree of sensuality without being labeled mentally ill, perverted, and criminal. By the 1930s, with boxing firmly established as the country’s most popular sport, daily reports on fights in newspapers were ubiquitous, along with images of fighters in art and advertising. At a time when to be homosexual came with great risk, gay artists looked to subject matter that allowed them to revel in the physicality of the male figure while sticking to popular, marketable subject matter. To the left of The Boxer at the Met is Paul Cadmus’ 1936 painting in tempera on masonite Gilding the Acrobats. The nude, muscular male athlete applying gold gilt to his body with the help of two other men (one also in a state of near undress), shows the ways artists used athletics as a means of sexualizing and fetishizing the male figure.*

From July of 1931 to December of 1933, Kid Chocolate held the Junior Lightweight title, all the while maintaining a lifestyle closer to that of a New York bohemian than that of a champion. Sometime in 1932 he contracted syphilis, the deadly by-product of his social milieu, and on Christmas day of 1933 he lost the title to Frankie Klick (that he may have fought with the after-effects of syphilis wasn’t known until after the fight). A few months later he was kayoed in a rematch with Canzoneri, prompting a brief retirement. The following year he returned to the ring with a vengeance, fighting 50 bouts and winning 47 before finally retiring for good in 1938 with a record of 135 wins, 10 losses and 6 draws, He returned to Cuba to live a quiet life, his wild days now behind him. No longer wealthy, it was not until the late 70s that the Cuban government recognized his contribution to Cuban athletics and provided him with a pension. He continued to live in the house he bought for his mother, where he died in 1988.

Sugar Ray Robinson considered Kid Chocolate the fighter he most admired for his stylish movement, balance, and slick flair within the ring. Barthé was equally admiring of Chocolate’s flair, comparing his light, graceful style to that of a ballet dancer. (This was not an unusual comparison. Over the years countless fighters – most famously Marvin Hagler – have dabbled in ballet to hone these same qualities.) Barthé’s bronze can be read on many levels: a strong, albeit exaggerated study of the male form; a veiled work of homoeroticism; and – in the accuracy of the features – as a portrait. Most importantly, the work stands as an imposing testament to Chocolate’s grace and beauty, now frozen in time for eternity.

*Of course this was not always the case, and I am not suggesting that all athletic imagery from the early-mid twentieth century is thinly-veiled homoeroticism. One only has to contrast these images with the boxing pictures of George Bellows, whose interest lay the social spectacle of the sport, as well as in the action, movement, and contortions of, as he put it, “two men trying to kill each other.”