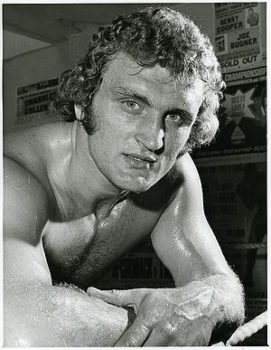 Joe Bugner was born in Hungary in 1950. In 1956 during the Soviet invasion of the country his family fled to Great Britain where they settled. At school Joe excelled at sports and eventually gravitated to boxing, and after a brief amateur career he turned pro at the early age of 17. He got off to a poor start losing his first bout by a TKO in the third round.

That first loss did not discourage the young Bugner and he came back to win 18 straight, 13 by knockout. His next loss was to the more experienced American Dick Hall who won a decision over 19 year old Joe.

Again, undaunted, Bugner would go undefeated in his next 14 fights earning himself a shot against Henry Cooper for the British Empire and European Heavyweight Titles. Bugner won by the closest of decisions that was booed by the crowd, but sportswriters were mixed on who they believed the victor was. Unfortunately for Joe, it was not only the controversy over the scoring but the fact he had ended the career of the beloved Henry Cooper that caused the public to turn on him. Being the man who dethroned “Our ‘Enry” would prove a curse to him. Coupled with the fact he was not a native born Brit he would not receive the adulation he should have gotten.

Bugner was only 21 when he defeated Cooper and by that time he had already beaten such known heavyweights as Jack O’Halloran, George Johnson, Chuck Wepner, Brian London, and Eduardo Corletti.

Joe defended the European title against Jurgen Blin but lost all his titles in his next bout against Jack Bodell. Bugner was criticized for not fighting hard enough to beat the veteran, a cry that would be heard throughout his career. There is a reason many believe Joe would often back off in a fight.

In a fight earlier in his career he defeated a fighter by the name of Ulric Regis by decision. Regis collapsed after the bout and later from a brain injury. An autopsy ruled the death was from a preexisting medical condition, but the memory of that tragedy buried in his subconscious, would cause him to hold back in fights.

After the loss to Bodell, Joe came back winning ten of his next eleven fights while also regaining the European Title. This would pave the way for him to fight former champ Muhammad Ali in 1973. That year would prove to be a pretty amazing one for Bugner and it is what made him unique.

He began the year with a victory over Rudi Lubbers and then traveled to Las Vegas to take on Ali. You may remember this bout as the one where Ali wore a robe into the ring that was given to him by Elvis Presley emblazoned in jewels with the words People’s Champ. At a party given days before the fight Joe met Elvis Presley and asked him if he could get a robe as well seeing that he was also a champion. When Elvis responded by saying ”You’re no champion” Bugner told the King to ”Stuff it” and walked out. 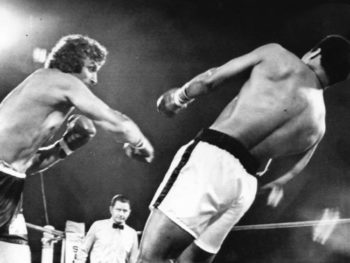 Joe went into the Ali fight an 8 to 1 underdog but gave a very good account of himself while losing a 12 round decision. You would think it would have been time for a rest, but not for the hard working Bugner.

In his very next fight less than five months later he took on former champ Joe Frazier in England. In the tenth round Frazier dropped Joe with a left hook, but Bugner arose and hurt the former champ near the end of the round. While the decision was not in doubt, Frazier knew he was in a fight and looked the worse for wear at the end. Joe Bugner left the ring with his head held high last night. He also left going down in history as the only man to fight Joe Frazier and Muhammad Ali in back to back fights. 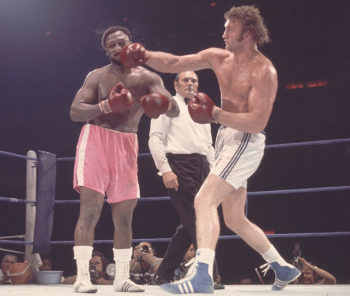 Amazingly, Joe was not done fighting in 1973. He would close out the year with wins over Giuseppe Ros and the hard punching Mac Foster. He would continue winning bouts and earn a rematch with Ali who had by now regained the heavyweight crown. The fight took place on June 6, 1975 in Kuala Lumpur. Bugner was disappointing in this match fighting from a mostly defensive stance while losing a one sided decision. This performance further fueled the anti Bugner sentiment in England where it seemed he just could not get any respect from the fans.

At the age of just 25 he had gone the distance with Ali twice and Joe Frazier once. Taking the two former champs in the space of a few months was a truly remarkable feat, but one that is largely forgotten.

After the second loss to Ali, Bugner seemed to lose motivation. He continued fighting but at a much less hectic schedule. In many of his fights from this point on he did not appear to have the drive to again earn a title shot.

In 1986 he moved to Australia where he continued fighting as well as acting in movies. There was talk of him fighting Mike Tyson, but in 1987 after being stopped by Frank Bruno he retired. He was 37 years old at time.

He made a comeback in 1995 and won the Australian Heavyweight Title. He was victorious in 8 of his last 9 bouts before retiring for good at the age of 50 in 1999.

Joe Bugner is rarely mentioned when talk turns to the heavyweights of the 1970s, but he should not be forgotten. He had a stand up European style and possessed a very decent left jab. He could put together combinations when he wanted to. He ended his career with a very respectable record of 69 wins (41 by knockout), 13 losses, and 1 draw. He was only stopped on four occasions.

Joe should be remembered as the only man to step in the ring with Muhammad Ali and Joe Frazier in consecutive bouts. The fact that he did this within a few short months of each other is truly amazing, and for this Joe Bugner deserves respect.