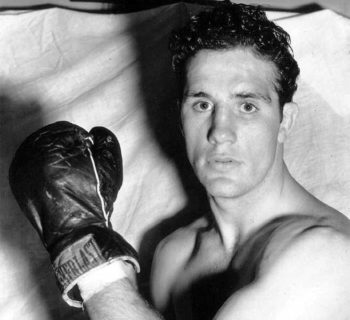 This past October 8th marked the 100th anniversary of the birth of Billy Conn. The Pittsburgh Kid held the Light Heavyweight Championship but is best known for his challenge against Joe Louis for the Heavyweight Crown. In that fight Conn gave Joe all he could handle for twelve rounds before Louis caught up with him in the 13th round for the knock out. I consider that bout to be one of the greatest of all-time as both fighters put on a brilliant display of what the Art of Boxing is all about. Conn was magnificent on that June night in 1941. He was fast and sharp. He mixed his punches up and feinted beautifully. He also showed he could withstand the power of the great Joe Louis. Louis was also remarkable. In a fight where he easily could have become frustrated at not being able to catch up with his elusive opponent Louis remained cool and launched a sustained attack on Conn’s body. This strategy paid off as he finally was able to slow Billy down enough to be able to take him out in the 13th round.

Conn was outweighed by over thirty pounds in the fight. Joe Louis had every advantage over him; Height, reach, weight, power, and just being Joe Louis. Max Baer once said of the Brown Bomber, “Fear is looking across the ring at Joe Louis and knowing he wants to go home early.” Conn was one of the very few men to step into the ring with Louis to not be gripped by that fear. Billy was the consummate professional, he was in there to win and had no doubt he could do the job.

Billy Conn was born in Pittsburgh, PA in October 8, 1917. When he was a kid his father took Billy to work with him one day at the Westinghouse factory. Billy took one look around and decided working 9:00 to 5:00 everyday was not for him. He decided early on he would much prefer to make his living in the ring. He made his professional debut in 1934 just shy of his 17th birthday. Hs first year in the ring was not overly impressive as he had eight wins and 8 losses. Even though it didn’t look like an auspicious beginning, Billy was learning his trade. In the second half of 1935 Conn hit his stride. He went 28 and 0 over the the next two years and was gaining recognition. He went on to win the Light Heavyweight title in 1939 by defeating Melio Bettina. Billy defended the title in a rematch with Bettina and then twice against Gus Lesnevich before relinquishing the belt in pursuit of a bigger prize, the Heavyweight Championship of the World.

Conn began campaigning as a heavyweight taking on the leading contenders while working his way to that title shot. It is interesting to note that while Conn rarely weighed more than 180 pounds, and was usually closer to 170, he never lost a fight against a heavyweight. In fact, though not preciously known as a big puncher, Conn knocked out more than half the heavyweights he faced. He did not do this by bulking up. What happened is when he got in against the slower moving big guys he was able to set himself more in order to throw harder punches.

Billy Conn was a truly great fighter. Watching him in action is a master class in the Art of Boxing. There have been very few fighters who were as consistently good as Conn. When you take his outstanding skills and combine that with his boundless self-confidence, superb conditioning, and tremendous heart you have all the makings of one of the greatest fighters to ever step into a boxing ring.

Conn had just the style to give Ali all kinds of problems.

I have given some thought to how The Pittsburgh Kid would have done against Muhammad Ali. It is a dream fight that is never brought up when old school fight people argue about what might have happened if two greats from the past had been matched up, but it should be. I believe Billy Conn had just the style to give Ali all kinds of problems.

What is often overlooked when analyzing Ali is the trouble he had with smaller and faster opponents. Going back to his fights with Doug Jones and Billy Daniels you could see how when his speed was not dominant he had problems. Even against Henry Cooper it was shown how he could be tagged by a smaller and faster man. Ali did his best against the big and slow moving heavyweights, much as Conn did.

In Billy Conn Ali would be facing a man that not only could match him in hand and foot speed, I would argue Conn was faster in both departments, but also a man who would not be in the least intimidated by him. Conn was also a much better scientific fighter than Ali as Ali depended more on his speed and reflexes when young and his amazing toughness when older. Conn had a full palette of boxing moves he could tap into.

In Ali’s fight against Jimmy Young he was frustrated by Young’s cagey moves, and Jimmy Young was no Billy Conn. In three fights against Ken Norton, Ali could never improve on his performance, never being able to solve the one dimensional style of Norton.

In Conn’s fight against Louis the deciding factor was Joe’s body punching which slowed Billy down and made hm vulnerable. Ali never threw body punches so Billy would have never tired in a fight against him. Conn would have set a torrid pace against Muhammad darting in and out and while throwing a broad array of punches. Ali would for the first time be facing an opponent who was faster than he was. He would also be facing a smaller man who had incredible physical strength. Watch Conn in the clinches with the much bigger Joe Louis and you can see how he was able to hold his own with a much bigger man.

The more I think about this match up the more surprised I am that it is never discussed. It has all the makings for a great fight and a great argument. Sure, Ali had blinding speed when facing big men like Liston and Foreman, but what would happen if he was in with a talented boxer who was faster than he was? Billy Conn would have provided the answer.