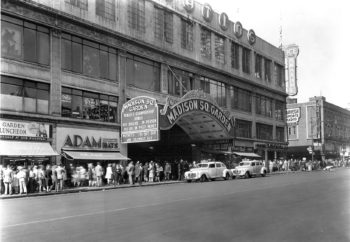 The ultimate goal of every professional boxer is to win a world title, but running a close second is the opportunity to be featured in a main event at the world’s most famous sports arena—Madison Square Garden. During the Golden Age of boxing, from the 1920s to the 1950s, the honor of topping a card in “the Garden” was an achievement to be savored for the rest of a boxer’s life.

A brief historical note: There have been four Madison Square Gardens. The first dates to the late 1870s. But the building that is most synonymous with boxing’s glory days—and the one most fondly remembered by those who experienced it—was the third version that occupied an entire block on New York’s Eighth Avenue between 49th and 50th streets. Garden III stood as a monument to the sport from 1925 to 1967. It was demolished in 1968 and replaced by the current Madison Square Garden located 16 blocks south at 33rd street and Seventh Avenue.

Gaining entry into boxing’s holy of holies was a privilege not easily attained. Certain standards had to be met. Even the undercard boxers had to have records that warranted an invitation. Boxers who fought main events in other arenas might only qualify for a six round preliminary or eight round semi-final in the Garden. To appear in the featured bout of the evening was equivalent to starring in a Broadway theatrical production.

Because of the arena’s status, and the importance of boxing to the popular culture at that time, the result of a Garden main event made news throughout the world. For every boxer lucky enough to appear in a Garden main event the knowledge that a good showing—win or lose—could mean an invitation back and another good payday spurred them to put forth their best effort.

On the night of August 9th, 1946 Ruby Kessler, a 19 year old welterweight out of Brooklyn’s Coney Island neighborhood, was prepared to do just that.

Ruby’s journey to a featured bout at the world’s most famous arena began three years earlier when he knocked out Ray Ramirez in the first round at the Fort Hamilton arena in Brooklyn. It was an auspicious beginning for the 135 pound boxer. Ruby had followed his older brother Milton into the ring. In fact, on the same night that Ruby scored his first pro victory Milton fought in the main event.

Milt Kessler had turned pro in 1939 and quickly established a reputation as one of the finest young boxers in New York City. He was a classic stand up boxer with quick hands and agile footwork. The Kessler brothers were part of a grand boxing tradition. Jewish boxers were an integral part of the boxing scene, having produced hundreds of title contenders and 29 world champions from the early 1900s to the late 1930s. They hoped to become the second set of Jewish brothers to win world titles. The first were Abe and Monte Attell who ascended to their thrones at the turn of the last century.

Milt compiled an impressive 31-4-2 won-lost-draw record before he was drafted into the Army in 1943. He was one of 4000 American professional boxers who served in the armed forces during World War II.

After being discharged from the army in 1946 Milt decided not to continue his boxing career. By that time Ruby had graduated from preliminary boxer to main bout status. He began the year by winning six in a row before dropping an eight round decision to Patsy Brandino at the Queensboro Arena. But just sixteen days later Ruby scored his most impressive victory by coming off the floor to stop veteran Pat Scanlon in the 7th round of a ten rounder at Brooklyn’s Ebbets Field. That victory earned him his first Garden main event. His opponent was Greenwich Village’s tough Tony Pellone. A few months earlier Pellone had scored a major upset by ending Billy Graham’s 58 bout undefeated streak via a controversial ten round decision.

Pellone and Kessler had similar records and were evenly matched but Pellone had an advantage: He was a mob managed fighter. As a “connected” fighter there was always the possibility that the fight judges and the referee would be under orders not to vote for his opponent if the bout went the distance. The day before the fight the odds favored Pellone at 9 to 5. By fight time the odds had increased to 11 to 5 on Pellone. There was no reason for this unless word had gotten out that the fix was in and Pellone could not lose.
In a rousing see-saw fight that the New York Times described as “a bruising battle that held the interest of the crowd right to the final bell” Pellone won a split decision that was greeted with boos by a majority of the fans in attendance.

Irving Kessler, Ruby’s younger brother, believes the decision was preordained. In an interview with the writer he offered as proof the referee’s telling Ruby after the fight, “Sorry Ruby, the best I could give you was a draw”. There is no question the fight was very close but in the end the two judges scored it 5-4-1 for Pellone, with the referee voting a draw. It should not surprise anyone with knowledge of boxing history that the decision might have been fixed. Professional boxing in the 1940s and 1950s was heavily infiltrated by mob elements and fixed fights were not uncommon.

Less than six weeks later Ruby knocked out Pat Foley in the first round. Over the next two months he outpointed Pat Scanlon in ten and finished out the year by stopping former contender Cleo Shans in three. Those victories earned Kessler a second Garden main event. On January 17, 1947, in front of 14,000 fans, Ruby crossed gloves with master boxer Billy Graham. An interesting sidelight to the fight was that both men were trained by Whitey Bimstein. As a result Bimstein decided not to work in either boxer’s corner.

The Graham bout was the most important fight of Ruby’s career. Graham was a highly regarded welterweight contender. Fortunately he was not a mob managed fighter so if the fight went the distance a fair decision would be expected.
A victory over Graham would put Ruby in line for a title shot. But it wasn’t to be. Although every round was closely contested the difference came down to Graham’s vast experience (he had twice as many fights as Kessler). Graham’s accurate counterpunching and superb defensive skills gave him the edge, but Ruby never stopped trying and when tagged would fight back even harder.

Ruby lost the decision but impressed the critics with his tenacity and toughness. Writing for the New York Times, James P. Dawson praised Kessler’s performance: “The Coney Island youngster is one of the most courageous fighters in the welterweight class today and a lad who is dangerous even when staggering around the ring groggily under fire. In ten rounds that sizzled with superb boxing and sparkled with sharp, solid hitting, Graham received the unanimous decision.”

In his next bout Kessler was stopped in the 7th round by lightweight contender Juste Fontaine. Fritzie Zivic, the ex-welterweight champ who was known for his foul tactics, trained Fontaine. He schooled his protégée well in the art of dirty fighting. Kessler was ahead in the scoring but during the bout was repeatedly fouled. Punches below the beltline, hitting with an open glove, thumbing and butting were taking a toll. The bout took place in Philadelphia, Fontaine’s hometown. The referee, obviously favoring the hometown favorite, issued a few warnings but would not disqualify or deduct points from Fontaine. In the seventh round a weakened Kessler was backed against the ropes and taking punishment when the referee intervened and stopped the bout. As the fighters left the ring Ruby’s brothers Milt and Freddy confronted Zivic and an argument ensued. Several punches were exchanged before security stepped in and broke it up.

On October 11, 1948 Ruby was knocked out for only the second time in his 57 bout career when he was stopped in the first round by welterweight contender Tony Janiro. Although he was only three weeks shy of his 22nd birthday the loss convinced Ruby it was time to hang up his gloves.

Irving Kessler is 88 years old. He is the only surviving member of the Kessler clan (originally seven brothers and one sister). Irving remembers how proud he was to carry his older brother’s equipment bag to the gym. He attended almost all of Ruby’s fights and recalls “a fearless boxer who would take on anyone. Whereas Milt was a pure boxer who was often compared to the great Benny Leonard, Ruby was a fighter who rarely took a backward step and didn’t mind mixing it up if the situation called for it. He was an excellent boxer and puncher and if you were not a title contender or champ you couldn’t get by Ruby.”

Ruby Kessler left the sport just as television was beginning to mass market boxing to millions of new fans. No doubt his all action style of fighting would have made him a very popular TV boxer.

Following his retirement Ruby partnered with his brother Milt and opened a bar in Brooklyn. Two years later they ran into financial problems and Ruby decided to pick up a payday by fighting again. On December 23, 1950, at the Ridgewood Grove Arena in Brooklyn, Ruby was holding his own against journeyman Joey Carkido when he suffered a deep gash over his left eye that caused the referee to stop the fight in the 6th round. He never fought again. His final stats were 38-17-2. He knocked out 17 opponents and was KO’d 3 times.

In 1955 Ruby handed the bar over to his brother and took a full time job as a sales representative for a liquor company.

Back in the days when boxing was still boxing not everyone got to be a world champion. There was a definite hierarchy of boxing talent and generally eight champions (today there are over 100) for each of the eight (now 17) weight classes. In that unforgiving environment to be competitive with the best took an extra measure of character and talent. Despite never having won a title Ruby Kessler measured up to the task and was an indispensable part of boxing’s greatest generation.

Mike Silver is the author of Stars in the Ring: Jewish Champions in the Golden Age of Boxing (2016, Lyons Press) and The Arc of Boxing: The Rise and Decline of the Sweet Science (McFarland Publishers, 2008).