At The Boch Center Wang Theater 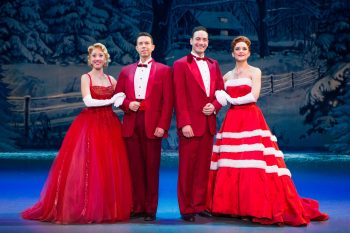 White Christmas now playing at the Boch Center Wang Theatre in Boston is based on the 1954 movie of the same name. The story of two WWII veterans and Army buddies, Bob Wallace and Phil Davis who form a musical act after the war and, at the urging of Phil, start pursuing love interests Betty and Judy Haynes is corny, formulaic, and great fun.

During the course of catching up with Betty and Judy, who are also performing as musical artists the Haynes Sisters, they end up at the Columbia Inn in Vermont run by their former Commanding Officer General Waverly. The inn is failing, and well, you can figure out the rest.

What is wonderful about musicals like this is they are a perfect showcase for the amazing music taken from the Great American Songbook, in this case the songs of Irving Berlin; tunes such as Count Your Blessings Instead Of Sheep, I Love A Piano, Let Me Sing And I’m Happy, and Blue Skies. It is also, as the title reminds us, Christmas Season and Mr. Berlin wrote many of the Christmas songs that have become standards. Along with the title number these include Happy Holidays, Snow, and I’ve Got My Love To Keep Me Warm.

The huge stage of the Wang Center can be overwhelming, and at first I thought the players were going to be lost in their surroundings. However, their powerful performances and the beautiful scenery prove large enough to fill their surrounding and more. Blue Skies performed by David Elder as Bob Davis along with the chorus all dressed in white and  set against a  background of sky blue with wisps of clouds was food for the eyes while the singing and dancing were spectacular.

Kerry Conte and Kelly Sheehan as the Haynes Sisters are delightful while performing the number Sisters, a song that is later reprised by Bob and Phil in a bit of  twist. There is great chemistry among the four actors both when all together and when paired off separately.

Phil played by Jeremy Benton sings one of Berlin’s best songs I Love A Piano while dancing atop a small grand piano. He is joined by Judy and the pair perform a tap dance routine while seated on the piano with their feet hitting the stage. It is innovative and received a well deserved round of applause.

Bob and Betty bring tenderness to Count Your Blessings, a song that is not only appropriate for the Christmas Season, but one that delivers a message we should all take to heart each and every day.

Judy performs How Deep Is The Ocean set at the Regency Room in New York City. Here is where that large stage really works. Judy is joined by Phil as they sing and dance under a beautiful chandelier and are surrounded by gorgeous white draperies.

The set designs adapted by Kenneth Foy from the 2009 production sets designed by Anna Louizos are breathtaking. The colors vivid and warm are marvelous. The scenes at the inn capture what it feels like to be in New England at Christmastime. I don’t want to give away the ending, but I can assure you that you’ll be in awe at what you see.

Lorna Luft plays Martha Watson the manager of the Columbia Inn in Vermont. When she sings Let Me Sing And I’m Happy it is impossible not to think of her mother Judy Garland, but she is not performing an imitation of her famous mother. Ms Luft is a consummate stage professional who can not only sing beautifully but also has tremendous stage presence and exquisite timing.

Conrad John Schuck as General Henry Waverly is a cross between George Patton and General George C. Marshall, proud, firm, and tender. In the performance I attended Kyla Carter played Susan, the granddaughter of General Waverly. (The role is alternated with Emma Grace Berardelli). Ms Carter was impressive when she reprised Let Me Sing And I’m Happy. It must have been a bit intimidating to be performing the number in front of Lorna

Luft just minutes after Ms Luft had sung it, but Ms Carter was poised and powerful.

The character of Ezekiel Foster has few words, but his “ayuhs”, high waisted pants, cigar, and facial expressions are subtle and very funny. Cliff Bemis originated the role and is on the stage here in Boston. It takes on even more meaning to native New Englanders. Is he good? Ayuh!

Director and choreographer Randy Skinner has put the large stage to good use, keeping it open and vast on numbers such as Blue Skies, while using the scenery to shrink it a bit and frame scenes tastefully such as the ones at the inn.

This is a big production with a full orchestra and very large cast. Irving Berlin’s White Christmas is just the thing to make you forget about your troubles and become filled with the joy and spirit of Christmas. Great music, great talent, and great scenery on a great big stage is just the ticket for a great night of theatre.  This should be a part of any Christmas celebration in Boston.

Directed and Choreographed by Randy Skinner