Mame, The Sound of Music, and La Cage Aux Folles 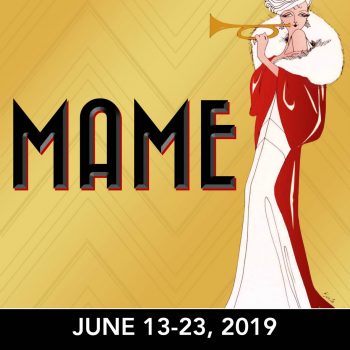 Reagle Music Theatre of Greater Boston’s 51st consecutive summer season will take audiences on a fabulous journey around the world and across the 20th Century with three classic musicals:

Mame, from June 13-23, will star IRNE and Norton Award winner Leigh Barrett as “Auntie Mame,” an irrepressible 1920’s socialite whose New York life is changed forever when her orphaned nephew comes to live with her. The Sound of Music, from July 11-21, relates the beloved tale of a young postulate in pre-WWII Austria who is sent to work as a governess and brings joy and music into the family’s home. Finally, the musical comedy La Cage Aux Folles, August 8-18, will travel to the 1980’s French Riviera for the hilarious tale of love and family set above a glitzy drag nightclub.

Directed and Choreographed by Eileen Grace

Mame’s chic New York City life is changed when her orphaned nephew comes to live with her. Surrounded by a cast of eccentric characters, she celebrates the roaring 20s, overcomes tragedy, and sails through life without missing a fad or a dance step. Featuring Jerry Herman songs like “If He Walked Into My Life,” “It’s Today,” “We Need A Little Christmas,” and “Bosom Buddies,” this beloved musical is sure to warm any heart.  Book by Jerome Lawrence and Robert E. Lee.  Music and Lyrics by Jerry Herman.

In 1930s Austria, Maria is struggling in her attempt to become a nun. When she is sent to look after the children of a stern, widowed Navy captain, she brings joy and music back into the family’s home. This beloved, Tony and Oscar-winning musical features Rodgers & Hammerstein songs like “My Favorite Things,” “Climb Ev’ry Mountain,” “Edelweiss,” and “Do-Re-Mi.  Music by Richard Rodgers. Lyrics by Oscar Hammerstein II. Book by Howard Lindsay and Russel Crouse. Suggested by The Trapp Family Singers by Maria Augusta Trapp. Presented through special arrangement with R&H Theatricals.

Georges and Albin enjoy a charmed life on the French Riviera as proprietor and star of a glitzy drag club. When their son gets engaged to the daughter of a bigoted politician, the limits of love, family, and mascara are put to the test in this hilarious, heartwarming musical.  This new production of the groundbreaking musical comedy features a score by Tony and Grammy winner Jerry Herman (including songs like “I Am What I Am,” “The Best of Times,” and “Song on the Sand”) and a book by four-time Tony Award winner Harvey Fierstein. Music and Lyrics by Jerry Herman. Book by Harvey Fierstein. Based the play “La Cage Aux Folles” by Jean Poiret. Presented through special arrangement with Samuel French, Inc.

All family-friendly shows will run for 8 performances over 2 weekends; Fri & Sat at 7:00 pm, Thurs & Sun matinees at 2:00 pm. Tickets for Reagle’s 51st summer season can be purchased at www.reaglemusictheatre.org, by calling the box office at 781-891-5600, or at the theater box office.