An All-Star Cast to Perform in the Ogunquit Playhouse
Holiday Production of Annie at The Music Hall in Portsmouth, New Hampshire 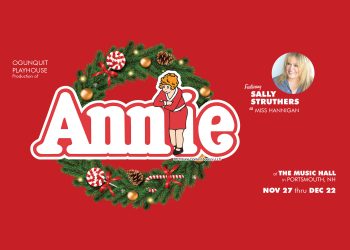 Annie is the story of a spunky, red-headed orphan who lands a holiday stay with Oliver “Daddy” Warbucks, a billionaire trying to do good. This delightful musical has become a worldwide phenomenon and is the winner of seven Tony Awards, including Best Musical. The acclaimed book and score by Tony Award-winners Thomas Meehan, Charles Strouse, and Martin Charnin feature some of the greatest musical theatre hits ever written, including “Tomorrow.”

Starring as the lead character Annie is Josie Todd who is making her Ogunquit Playhouse debut. She recently performed in Because of Winn Dixie at Goodspeed Musicals and Annie at Casa Mañana. Her many theatre roles include Beauty and the Beast as Chip, The Music Man as Gracie Shinn, The Best Christmas Pageant Ever as Maxine, and Freaky Friday, Jr. as Monica.

Joining the cast as Oliver Warbucks is Robert Newman who is perhaps best known for his 28-year run as Joshua Lewis on the longest running program in broadcasting history, Guiding Light.(which he also directed).

Sally Struthers returns to the seacoast to reprise her role as Miss Hannigan. Ms. Struthers is a two-time Emmy Award and Golden Globe Award winner for her performance in the groundbreaking TV series All in the Family.

Ogunquit Playhouse is thrilled to welcome Gail Bennett back to the stage in the role of Grace Farrell. Ms. Bennett has performed in the Ogunquit productions of My Fair Lady as Eliza Doolittle opposite Jefferson Mays, The Sound of Music as Maria opposite Rex Smith, and as the title role in Mary Poppins on both the Ogunquit and The Music Hall stages.

Joining the cast as Rooster is Jeffry Denman who has performed, directed, and choreographed at Ogunquit Playhouse. He returns to the seacoast after directing/choreographing the highly acclaimed Ogunquit Playhouse 2018 production of An American in Paris, for which he won an IRNE award as Best Choreographer.

Rescue dog, Macy, will be playing Sandy. Macy was adopted by guardian and trainer Bill Berloni from Rocky Spot Rescue of Oklahoma City, OK in December of 2009 at the age of 18 months after seeing her on Petfinder.com. Sandy’s first production of Annie was in the summer of 2010 and since she has starred in dozens of productions nationwide. On Thanksgiving Day 2011, she was seen on NBC during The National Dog Show, sharing spots with John O’Hurley.

Bill Berloni is the top recognized trainer for theatrical animals in the U.S. He received a Tony Award for Excellence in Theatre in 2011, honoring his 30 years of rescuing shelter dogs and humanely training them for a career in the entertainment industry. He is also the recipient of 2014 Outer Critics Circle Special Achievement Award and the 2017 Drama League Award for Unique Contribution to the Theater. Bill Berloni’s animals have appeared in hundreds of Broadway, Off-Broadway and regional theatre productions, tours, movies and television shows all starting with Annie in 1977.