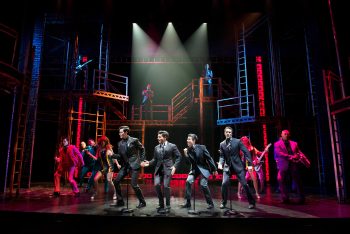 The Ogunquit Playhouse 2019 season kicks off with Jersey Boys! The multi-Tony Award-winning, international sensation that performed to sold-out houses during its run in 2018, is back by popular demand May 15 through June 15. The cast that BroadwayWorld exclaimed to be “the closest you’ll ever get to having seen Frankie Valli and the Four Seasons,” also returns to the Ogunquit stage – Jonathan Mousset (Frankie Valli), Matt Magnusson (Tommy DeVito), Andy Christopher (Bob Gaudio), and Matthew Amira (Nick Massi).

Follow the incredible story of four guys bound by one dream, who worked their way from the streets of New Jersey to the heights of stardom. Jersey Boys takes audiences on an exhilarating journey with the electrifying performances of the golden greats that took these hometown boys from Jersey all the way to the top of the charts: “Sherry,” “Big Girls Don’t Cry,” “Can’t Take My Eyes Off You,” “Dawn,” “My Eyes Adored You,” and many more. If you missed it last year, don’t miss your chance to see this blockbuster show – you’re sure to leave exclaiming, “Oh, What a Night!”

Starring as Frankie Valli, lead vocalist of The Four Seasons is Jonathan Mousset. His phenomenal performance, falsetto, and range was described as astounding by the Portland Press Herald last season. Mr. Mousset has performed in many regional theatres across the U.S. in such shows as Newsies, In the Heights, and Godspell. He has also performed in concerts at New York City venues including 54 Below, the Times Center, and the Town Hall. Matt Magnusson returns to play charming bad-boy Tommy DeVito, the lead guitar player of The Four Seasons, who serves as the show’s primary narrator and founding member of the band. Mr. Magnusson has numerous regional theatre credits including Grease, Spring Awakening, American Idiot, and Ring of Fire.

Reprising his role from last season as Bob Gaudio, the sensible and poised songwriter behind The Four Seasons is Andy Christopher. He has performed as Buddy Holly in the National Tour of Buddy: The Buddy Holly Story and in many regional theatres across the U.S. including Bucks County Playhouse, Flat Rock Playhouse, West Virginia Public Theatre, The Muny, Pittsburgh Civic Light Opera, Great Lakes CFA, Fulton Theatre, Maine State Music Theatre, Casa Mañana, and the Ogunquit Playhouse where he got his start in 2012. Matthew Amira also returns to the Playhouse after his highly regarded portrayal of The Four Seasons bassist Nick Massi. Mr. Amira also performed at the Ogunquit Playhouse in the 2016 production of The Hunchback of Notre Dame. His many regional theatre credits include Madame Defarge, She Loves Me, Fiddler on the Roof, and South Pacific among others.

The Ogunquit Playhouse production will once again be helmed by Award-winning director, writer and producer Holly-Anne Palmer. Ms. Palmer is the lead Producer and Creative Director of theglobal hits Wine Lovers the Musical, PROHIBITION, and Holiday Happy Hour. She has numerous Broadway credits including Jersey Boys, Billy Crystal’s 700 Sundays, Bring It On: The Musical, Dracula, Walking With Dinosaurs, and Cover Girls. Her many Off-Broadway and regional credits include the 25th Anniversary Production of Steel Magnolias at Le Petit Theatre, Gentleman’s Wish and Will Success Spoil Rock Hunter? at Barrow Group, Platforms at TASC, Autophobia at Ars Nova, Inventing Avi Aviv at Abingdon Theatre, Oklahoma! for the Reagle Players, and for the Ogunquit Playhouse 2009 production of All Shook Up starring Sally Struthers.

Video From Last Year’s Outstanding Run. This year Jersey Boys plays from May 15 through June 15: